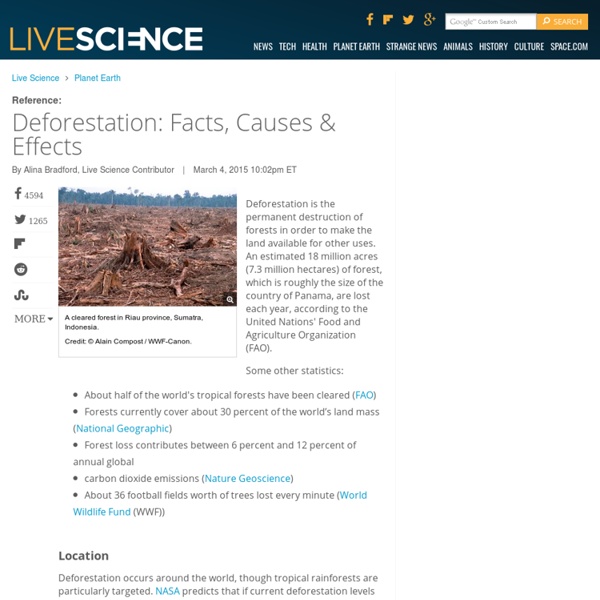 Deforestation is the permanent destruction of forests in order to make the land available for other uses. An estimated 18 million acres (7.3 million hectares) of forest, which is roughly the size of the country of Panama, are lost each year, according to the United Nations' Food and Agriculture Organization (FAO). Some other statistics: About half of the world's tropical forests have been cleared (FAO) Forests currently cover about 30 percent of the world’s land mass (National Geographic) Forest loss contributes between 6 percent and 12 percent of annual global carbon dioxide emissions (Nature Geoscience) About 36 football fields worth of trees lost every minute (World Wildlife Fund (WWF)) Deforestation occurs around the world, though tropical rainforests are particularly targeted. Error loading player: No playable sources found Though deforestation has increased rapidly in the past 50 years, it has been practiced throughout history. Weather vs. 0 of 10 questions complete

CBBC Newsround: Amazon deforestation Some main reasons why areas of rainforests are cut down:Farming e.g. soya fields, cattle ranches Mining Flooding areas of land as part of hydro electric power stations Logging to sell the timber Once the trees go, the soil becomes infertile in one or two years, making it poor for farming. Hunting becomes more difficult for the people who live there as the habitat for wildlife is lost. Traditional people's cultures are also lost. The effects of deforestation: Trees are removed. Trees do not protect soil so nutrients are washed out by the rain. Soil is now less fertile and the unprotected surface becomes dry and compacted. It is hard for rain to soak into the soil, so flooding may occur. New trees grow more slowly and there are less species. Possible alternatives to deforestation: You may think that the obvious solution to the problems of deforestation is simply to stop people cutting the trees down. However, it's not always as straightforward as that. The global effects of deforestation:

Rain Forest Threats, Rain Forest Species More than half of Earth’s rain forests have already been lost forever to the insatiable human demand for wood and arable land. Rain forests that once grew over 14 percent of the land on Earth now cover only about 6 percent. And if current deforestation rates continue, these critical habitats could disappear from the planet completely within the next hundred years. The reasons for plundering rain forests are mainly economic. Threats Solutions National Geographic: Deforestation Modern-Day Plague Deforestation is clearing Earth's forests on a massive scale, often resulting in damage to the quality of the land. Forests still cover about 30 percent of the world’s land area, but swaths the size of Panama are lost each and every year. The world’s rain forests could completely vanish in a hundred years at the current rate of deforestation. Forests are cut down for many reasons, but most of them are related to money or to people’s need to provide for their families.The biggest driver of deforestation is agriculture. Logging operations, which provide the world’s wood and paper products, also cut countless trees each year. Not all deforestation is intentional. Deforestation has many negative effects on the environment. Deforestation also drives climate change. Removing trees deprives the forest of portions of its canopy, which blocks the sun’s rays during the day and holds in heat at night.

BBC Nature - Rainforest videos, news and facts Why people do slash and burn Deforestation The Double Whammy of Deforestation Deforestation by burning, a widespread practice in the world’s tropical rain forests, adversely impacts the trace-gas composition of the atmosphere in two different ways. First, the burning of the tropical forests produces large amounts of carbon dioxide, carbon monoxide, methane, and other trace gases that are products when biomass burns. Second, the tropical forest is an important sink, or repository, for carbon dioxide. Atmospheric carbon dioxide is incorporated into the living biomass via the process of photosynthesis, which in turn produces the oxygen we breathe. The Past Much of the Earth was once covered by trees, but the majority of these were cleared long ago to make way for an ever expanding human population. People have been living in and around tropical rain forests for tens of thousands of years, taking what they needed from the wealth of natural resources available without compromising their environment.

Wildlife Trade Our work Display of illegal wildlife products used in Chinese medicine confiscated by customs officers at Heathrow Airport, UK. © WWF-Canon/Edward PARKERWildlife trade is any sale or exchange of wild animal and plant resources by people. This can involve live animals and plants or a diverse range of products needed or prized by humans—including skins, medicinal ingredients, tourist curios, timber, fish and other food products. Why There are many reasons why wildlife is traded, including: food—fruits, mushrooms, nuts, leaves and tubers, are particular important resources in sustaining livelihoods in many rural areas. The primary motivating factor for wildlife traders is economic, ranging from small scale local income generation to major profit-oriented business, such as marine fisheries and logging companies. In fact most of us are involved in wildlife trade in some way, even if it just as end consumers of wildlife products. Over-exploitation is a major concern:

Deforestation | Threats Forests cover 31% of the land area on our planet. They produce vital oxygen and provide homes for people and wildlife. Many of the world’s most threatened and endangered animals live in forests, and 1.6 billion people rely on benefits forests offer, including food, fresh water, clothing, traditional medicine and shelter. But forests around the world are under threat from deforestation, jeopardizing these benefits. Forests play a critical role in mitigating climate change because they act as a carbon sink—soaking up carbon dioxide that would otherwise be free in the atmosphere and contribute to ongoing changes in climate patterns. Deforestation is a particular concern in tropical rainforests because these forests are home to much of the world’s biodiversity. WWF has been working to protect forests for more than 50 years.

Rainforest food chain: top predators The Tiger Sits At The Center Of The Rainforest Food Web. Photo:Mila Zinkova The relationships among species in an ecosystem have often been described as a “food chain” in which the larger animals eat the smaller. But the food-chain image is a two-dimension one, when in fact the picture is much more complex. Rain forest relationships are better described as a web—a rainforest food web. In this complex rain forest web of life, the insects of the rainforest floor tend to eat plants, fungi, decaying material and other insects, and in turn be eaten by spiders, among a host of other creatures. Visit The Top Predators In the Rain Forest Food Web: Visit The Primates In The Rain Forest Food Web: Birds are also devoured by rainforest snakes—but many snakes, especially the smaller ones, are eaten by birds as well. Who eats whom often depends on what stage of life each creature is in, with adult animals generally having less to fear and juveniles and babies having much, much more to worry about.