About Therapeutic Writing. About 30 years ago, University of Texas professor of psychology, Dr James Pennebaker, lead a study on the effects writing had on stress and the immune system. 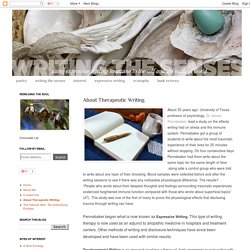 Pennebaker got a group of students to write about the most traumatic experience of their lives for 25 minutes without stopping. On four consecutive days Pennebaker had them write about the same topic for the same length of time along side a control group who were told to write about any topic of their choosing. Blood samples were collected before and after the writing sessions to see if there was any noticeable physiological difference. The results? “People who wrote about their deepest thoughts and feelings surrounding traumatic experiences evidenced heightened immune function compared with those who wrote about superficial topics” (47). ECamp instructor Shary Bartlett~ I love what she does with experimentation. 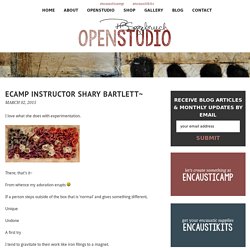 There; that’s it~ From whence my adoration erupts If a person steps outside of the box that is ‘normal’ and gives something different, Unique Undone. Special Forum: Support After Suicide - ABC Melbourne - Australian Broadcasting Corporation. Back from the Brink. I was on top of the world. 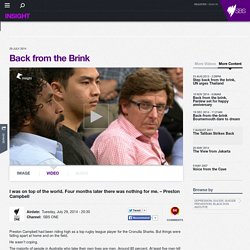 Four months later there was nothing for me. – Preston Campbell JENNY BROCKIE: Welcome everybody and it's great to have an all - male audience here tonight to talk about this subject. Preston Campbell, in 2001 you were riding high as one of the Cronulla Sharks top players. On the face of it life looked pretty good, yeah? PRESTON CAMPBELL: Yes. Breaking the silence over suicide. Join our live chat with Annette and Stuart Baker at noon today. 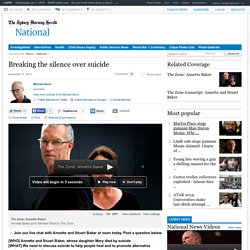 Post a question below. [WHO] Annette and Stuart Baker, whose daughter Mary died by suicide [WHAT] We need to discuss suicide to help people heal and to promote alternative routes out of despair [HOW] Community events to raise awareness and reduce stigma Annette and Stuart Baker's 15-year-old daughter Mary died by suicide in March 2011. The Bakers are here in The Zone today for two reasons: they want to help others suffering similar ineffable grief and they hope that by speaking out about suicide, they might influence anyone considering ending their own life to reconsider, reach out and find another path out of despair.

Annette and Stuart Baker, who lost their daughter Mary to suicide, helped mobilise the people of Albury to come together and break the stigma and the silence that surround the subject. The Compassionate Friends Worldwide Candle Lighting. Now believed to be the largest mass candle lighting on the globe, the 18th annual Worldwide Candle Lighting, a gift to the bereavement community from The Compassionate Friends, creates a virtual 24-hour wave of light as it moves from time zone to time zone. 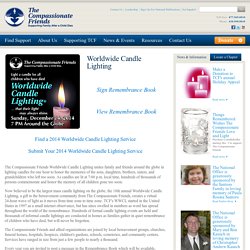 TCF's WWCL started in the United States in 1997 as a small internet observance, but has since swelled in numbers as word has spread throughout the world of the remembrance. Hundreds of formal candle lighting events are held and thousands of informal candle lightings are conducted in homes as families gather in quiet remembrance of children who have died, but will never be forgotten. About Us - Open to Hope. 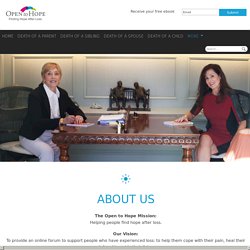 Gloria Horsley, Ph.D., M.S. C.N.S. Dr. Gloria Horsley is the Founder and President of the Board for the Open to Hope Foundation and is an internationally known grief expert, psychotherapist, and bereaved parent. She is a licensed Marriage and Family Therapist and Clinical Nurse Specialist, and has worked in the field of family therapy for over 20 years. Helpful Resources - Support After Suicide. There are a variety of resources available to assist individuals and families bereaved by suicide, as well as professionals who may be in contact with supporting the bereaved. 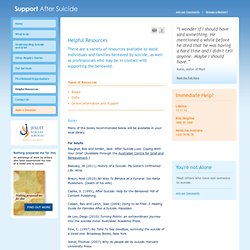 Books Many of the books recommended below will be available in your local library. For Adults. Help for Those Grieving a Suicide. By David Powlison Someone you know has committed suicide. 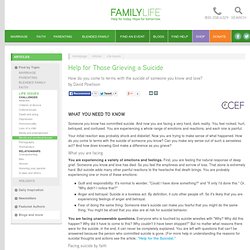 And now you are facing a very hard, dark reality. You feel rocked, hurt, betrayed, and confused. You are experiencing a whole range of emotions and reactions, and each one is painful. Your initial reaction was probably shock and disbelief. What you are facing You are experiencing a variety of emotions and feelings. Guilt and responsibility: It's normal to wonder, "Could I have done something? " You are facing unanswerable questions. Facing suicide by faith How can you deal with these painful reactions? You will never have an answer that ties up all the loose ends. C. You have to say, along with Peter, "Lord, to whom shall we go? Faith grows in weakness God is not naive to the realities that drive someone to suicide. Jeremiah is talking about living in a desert where life is hard and brutal. God's living water is His presence. Kay Warren: A Year of Grieving Dangerously. The Charity for Bereaved Children. The Dougy Center for Grieving Children and Families.

Australia - New Zealand Parents of Suicides. Support After Suicide. Australian Centre for Grief and Bereavement - Bereavement Counselling Research Project. After Losing a Parent, How to Hold on to Memories. RubberBall Productions/Getty My wife Leah (whom our daughter, Aderet, called "Imma," the Hebrew word for mother) was 32 years old when she died, in the prime of motherhood. 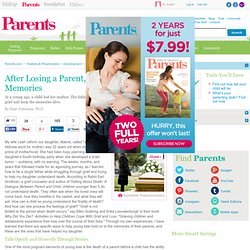 She had been busy planning our daughter's fourth-birthday party when she developed a brain tumor -- suddenly, with no warning. The weeks, months, and years that followed made for an agonizing journey, as I learned how to be a single father while struggling through grief and trying to help my daughter understand death. According to Rabbi Earl Grollman, a grief counselor and author of Talking About Death: A Dialogue Between Parent and Child, children younger than 5 do not understand death. They often ask when the loved ones will come back, how they breathe in the casket, and what they will eat. Talk Openly and Honestly Through Stories One of the most poignant elements of young loss is the death of a parent before a child has the ability to retain long-term memories.

Compassionate Friends Victoria Australia. Nothing Prepared Me For This - Jesuit Social Services. Nothing prepared me for this is an anthology of work by writers who have experienced the loss of a loved one to suicide. 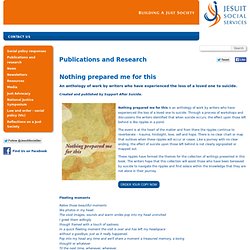 Through a process of workshops and discussions the writers identified that when suicide occurs, the effect upon those left behind is like ripples in a pond. The event is at the heart of the matter and from there the ripples continue to reverberate – trauma, hindsight, love, self and hope. There is no clear chart or map that outlines when these ripples will occur or cease.

Like a journey with no clear ending, the effect of suicide upon those left behind is not clearly signposted or mapped out. These ripples have formed the themes for the collection of writings presented in this book. Support After Suicide. Compassionate Friends Victoria Australia.