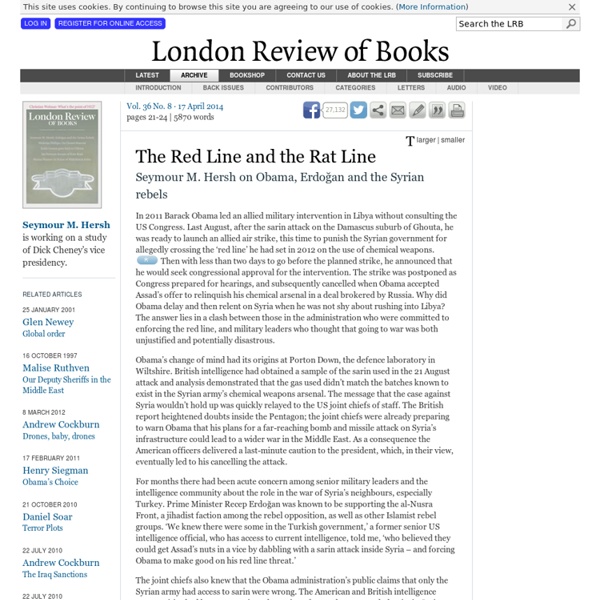 In 2011 Barack Obama led an allied military intervention in Libya without consulting the US Congress. Last August, after the sarin attack on the Damascus suburb of Ghouta, he was ready to launch an allied air strike, this time to punish the Syrian government for allegedly crossing the ‘red line’ he had set in 2012 on the use of chemical weapons.[*]​＊ Then with less than two days to go before the planned strike, he announced that he would seek congressional approval for the intervention. The strike was postponed as Congress prepared for hearings, and subsequently cancelled when Obama accepted Assad’s offer to relinquish his chemical arsenal in a deal brokered by Russia. Why did Obama delay and then relent on Syria when he was not shy about rushing into Libya? The answer lies in a clash between those in the administration who were committed to enforcing the red line, and military leaders who thought that going to war was both unjustified and potentially disastrous. 4 April

Democrats in ‘Group Think’ Land Exclusive: When Sunday’s Democratic presidential debate turned to world affairs, the NBC correspondents and both Sen. Sanders and ex-Secretary Clinton fell in line behind “group thinks” about Syria, Iran and Russia that lack evidentiary support, writes Robert Parry. By Robert Parry A curious reality about Official Washington is that to have “credibility” you must accept the dominant “group thinks” whether they have any truth to them or not, a rule that applies to both the mainstream news media and the political world, even to people who deviate from the pack on other topics.

Syrian Jihad Spawned the Islamic State Let me admit at the outset that Assad is an illegitimate tyrant who must abdicate his hereditary throne to the will of the people when the opportune moment arrives. But at the moment our primary concern shouldn’t be bringing democracy to Syria; at the moment our first and foremost priority should be reducing the level of violence in Syria. There are two parties to this conflict: the regime and the rebels (the majority of whom are takfiri jihadis).

Haryana’s Decision to Include the Bhagavad Gita in School Curriculum Skews the Idea of Education – The Caravan The next academic session will bring a change in curriculum for school students in Haryana, who will now have to study shlokas from the Bhagavad Gita as part of their syllabus. This move comes shortly after external affairs minister Sushma Swaraj called for the Gita to be declared a national holy book. Prime Minister Narendra Modi presented a copy of the book to US president Barack Obama on his maiden visit to the United States and to Japan’s Emperor Akihito last September. While presenting the book to the emperor in Japan, Modi said, “For gifting I brought a Gita.

Seymour M. Hersh · Military to Military · LRB 7 January 2016 Barack Obama’s repeated insistence that Bashar al-Assad must leave office – and that there are ‘moderate’ rebel groups in Syria capable of defeating him – has in recent years provoked quiet dissent, and even overt opposition, among some of the most senior officers on the Pentagon’s Joint Staff. Their criticism has focused on what they see as the administration’s fixation on Assad’s primary ally, Vladimir Putin. In their view, Obama is captive to Cold War thinking about Russia and China, and hasn’t adjusted his stance on Syria to the fact both countries share Washington’s anxiety about the spread of terrorism in and beyond Syria; like Washington, they believe that Islamic State must be stopped. Lieutenant General Michael Flynn, director of the DIA between 2012 and 2014, confirmed that his agency had sent a constant stream of classified warnings to the civilian leadership about the dire consequences of toppling Assad.

us-attacks-russia-over-copters WASHINGTON — Sen. John Cornyn, R-Texas, is in the middle of a high-stakes diplomatic chess match over a Russian government-owned arms agent that supplies the U.S.-backed army in Afghanistan as well as President Bashar Assad’s regime in Syria, which the United Nations says is embroiled in a civil war against anti-government rebels. For Cornyn, the issue is the Pentagon’s $900 million no-bid contract with Rosoboronexport – the Russian government-owned arms supplier – which he told reporters Wednesday “strikes me as profoundly wrong and inappropriate.” Russia, he said, has “blood on its hands, specifically Syrian blood.”

Sending our forces into another mission impossible - The Drum Posted Team Australia is being geed up for war in the manner of a desperate coach approaching the final quarter, writes a lively Mungo MacCallum. Having finally begun to recover from yet another Intensive Care Unit and, of course, from Anne Summers, I feel my recuperation has been set back by yet another tergiversation from our beloved Prime Minister. It appears that Tony Abbott has morphed from the Saviour of the Economy and the Protector of Borders to the Great War Leader.

Talk Of the Town IN 2012, two years before Arun Jaitley became the most important minister in Narendra Modi’s cabinet, the news that the ruling United Progressive Alliance’s allocation of coal blocks may have cost the government thousands of crores and unfairly benefited private interests, incapacitated the parliament’s monsoon session. Bharatiya Janata Party parliamentarians threatened to resign en masse, and Jaitley, then the BJP’s opposition leader in the Rajya Sabha, aggressively spoke out against what he called “the biggest scam in independent India.” As the stymied parliament session ground to a halt that August, Jaitley and Sushma Swaraj, his counterpart in the Lok Sabha, released a fierce joint statement.

Seymour M. Hersh · Whose sarin? · LRB 19 December 2013 Barack Obama did not tell the whole story this autumn when he tried to make the case that Bashar al-Assad was responsible for the chemical weapons attack near Damascus on 21 August. In some instances, he omitted important intelligence, and in others he presented assumptions as facts. Most significant, he failed to acknowledge something known to the US intelligence community: that the Syrian army is not the only party in the country’s civil war with access to sarin, the nerve agent that a UN study concluded – without assessing responsibility – had been used in the rocket attack. News Analysis / James M. Dorsey: US-Saudi differences over Iran widen emerging gulf between longtime allies Relations between the United States and Saudi Arabia, already frayed by US support for the wave of anti-government protests sweeping the Middle East and North Africa, are being further strained by differences over the degree to which Iran may be instigating the turmoil. US officials and a report by Chatham House, a prestigious British think tank, warn that Saudi Arabia’s efforts to maintain the regional status quo, refusal to recognize that the protests are fundamentally sparked by widespread political and economic discontent and insistence that Iran is at the root of all evil could provoke sectarian tension across the Middle East and Asia. The fears are further fuelled by Saudi efforts, disclosed by The Wall Street Journal, to rally Muslim nations across the Middle East and Asia to join an informal Arab alliance against Iran. Bahrain invited the GCC troops to help it defend itself against alleged Iranian interference. To be sure, US officials as well as the Chatham House report.

Saudi Arabia Will Grant U.S. Request for Anti-ISIS Training Program - NYTimes.com AMMAN, Jordan — Saudi Arabia has agreed to an American request to provide a base to train moderate Syrian opposition fighters, American officials said on Wednesday. “We now have the commitment from the Kingdom of Saudi Arabia to be a full partner in this effort — the train-and-equip program — to host that program,” said a senior Obama administration official, who added that discussions were underway to determine the specific site and other details. The Saudi willingness to host a training program comes as Secretary of State John Kerry is preparing to fly to Jidda, Saudi Arabia, on Thursday morning for a high-level strategy session on how to counter the Islamic State in Iraq and Syria. The meeting that is being hosted by the Saudis will also include senior officials from Arab states in the Persian Gulf region, as well as Egypt, Jordan, Lebanon, Turkey and Iraq. Continue reading the main story Video

How They Got Here – The Caravan NOT LONG AGO, I found myself in a panel discussion on television with three politicians. One was a Congress member of parliament, the second an MP from the Bharatiya Janata Party (BJP), the third the president of one of the smaller regional formations. In the course of the conversation I found reason to criticise the three netas for their sectarian stands. As the argument grew more heated, I found myself ignoring the others and turning on the Congressman in particular. Coming out of the studio and driving home, I later reflected on this partisanship of my own. Why had I been less harsh on the others? Syria's nonviolent resistance is dying to be heard But in Damascus, most of which remains under regime control, even many opponents of the regime also oppose U.S. intervention, according to Khaled Harbash. Harbash, 21, joined the uprising in April 2011 by helping to organize demonstrations as head of the Hama Civil Team. He moved to Damascus last year, where he has continued to engage in political activism with Building the Syrian State Current, a non-violent opposition group whose members organize meetings and democracy-building workshops among Syrian youth in hopes of building an inclusive foundation for a post-Assad government. The Current opposes outside intervention and armed opposition and favors a diplomatic solution to the conflict.