Cheney, Rothschild, and Fox News’ Murdoch to Drill for Oil in Syria, Violatin... While Syria is torn apart by the warring of U.S. imperialists and Islamic fundamentalists—leaving its children to die of starvation—another country plans to take advantage of the chaos by stealing resources from Syria’s southern region. 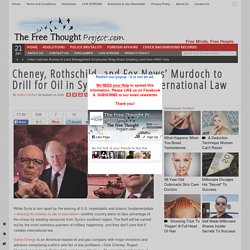 The theft will be carried out by the most notorious pushers of military hegemony, and they don’t care that it violates international law. Genie Energy is an American-based oil and gas company with major investors and advisors comprising a who’s who list of war profiteers—Dick Cheney, Rupert Murdoch, Lord Jacob Rothschild, and James Woolsey. The president of their Israeli subsidiary is Efraim “Effi” Eitam, an Israeli military commander who called for expelling the “cancer” of Arabs from Israel. Together, these warmongers and would-be ethnic cleansers will soon be drilling into a vast oil and gas reserve located in the Syrian territory occupied by Israel since 1967, known as Golan Heights.

“Covering and distributing news has been my life’s work,” said Mr. US Air Strikes Kill 36 Civilians in Syrian Village. US warplanes attacked the Syrian village of al-Khan today, according to the Syrian Observatory for Human Rights, killing at least 36 people, all of them civilians. 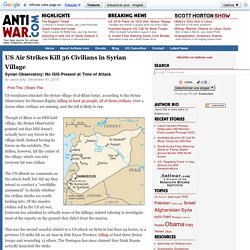 Over a dozen other civilians are missing, and the toll is likely to rise. Though al-Khan is an ISIS-held village, the Syrian Observatory pointed out that ISIS doesn’t actually have any forces in the village itself, instead having its forces on the outskirts. The strikes, however, hit the center of the village, which was why everyone hit was civilian. The US offered no comments on the attack itself, but did say they intend to conduct a “credibility assessment” to decide whether the civilian deaths are worth looking into. Syrian Rebels Destroy Russian Helicopter With US-Supplied Anti-Tank Missile. Earlier today, just hours after Turkey shot down a Russian Su-24 warplane near the border with Syria, the FSA (more specifically Alwiya al-Ashar) released footage of fighters celebrating over the body of a dead Russian pilot. 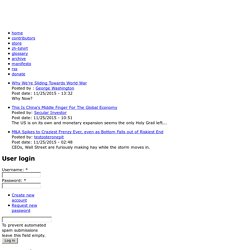 The group would later claim to have executed both pilots after they ejected from the plane and attempted to parachute to safety. In a second serious escalation, another FSA-aligned group claimed to have shot down a Russian search and rescue helicopter. Civilians and Hospitals Repeatedly Attacked as Bombing Escalates in Northern ... DUBAI/NEW YORK—Airstrikes in Syria have killed at least 35 Syrian patients and medical staff in 12 hospitals in northern Syria since an escalation in bombings began in late September, the international medical humanitarian organization Doctors Without Borders/Médecins Sans Frontières (MSF) said today. 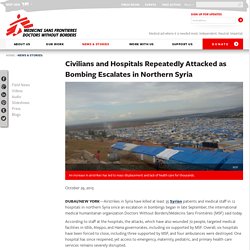 According to staff at the hospitals, the attacks, which have also wounded 72 people, targeted medical facilities in Idlib, Aleppo, and Hama governorates, including six supported by MSF. Overall, six hospitals have been forced to close, including three supported by MSF, and four ambulances were destroyed. One hospital has since reopened, yet access to emergency, maternity, pediatric, and primary health care services remains severely disrupted.

"After more than four years of war, I remain flabbergasted at how international humanitarian law can be so easily flouted by all parties to this conflict," said Sylvain Groulx, MSF head of mission for Syria. Israel Manipulating Claim to Golan Heights with U.S. Corporate Backing AnonHQ. October 27th, 2015 | by EV Politics Back in early 2013 it was reported that Israel granted a license to a Dick Cheney, Murdoch, and Rothschild-linked energy corporation known as Genie Energy Corp to drill for oil in the disputed Golan Heights. 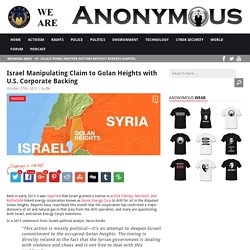 Reports have resurfaced this month that the corporation has confirmed a major discovery of oil and natural gas in that area from the drill operation, and many are questioning both Israel, and Genie Energy Corp’s intentions. WikiLeaks Reveals How the US Aggressively Pursued Regime Change in Syria, Ign... Syrian soldiers and children at a checkpoint in the besieged and devastated city of Homs, Syria, March 23, 2014. 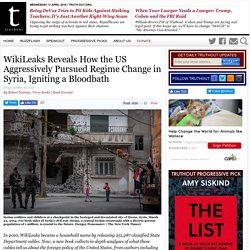 For both sides of Syria's civil war, Homs, a central Syrian crossroads with a diverse prewar population of 1 million, is crucial to the future. (Sergey Ponomarev / The New York Times) World War III - Who Will Be Blamed? Someone Finally Explains the U.S-Russian Proxy War in Syria — It’ll Leave You... With each day bringing geopolitical rivals, the United States and Russia, closer to the brink of an open military engagement in Syria and beyond, an eye-opening and accurate summary of the entire ordeal has finally come. 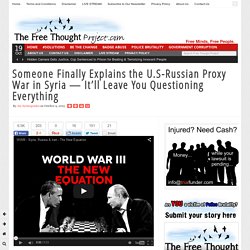 Storm Clouds Gathering has released a short video that breaks down numerous indisputable facts which the corporate mainstream media have essentially attempted to keep hidden from the American public. Russia has changed the geopolitical equation with the recent moves in Syria. They have been targeting and militarily striking the numerous factions fighting against the government of Bashar al-Assad, including CIA backed insurgent groups. The calculating and strategic moves by Putin reveal an intricate knowledge of U.S. geopolitical strategy in the region and beyond, and are are meant as a blockade against U.S. hegemony within Russia’s sphere of influence. According to the report by Storm Clouds Gathering: He refers to their fighters as brothers. Julian Assange: US & Israel Planned To Overthrow Assad In 2006. Cables reveal that before the beginning of the Syrian revolt and civil war, the United States hoped to overthrow Assad and create strife between Shiite and Sunni Muslims. 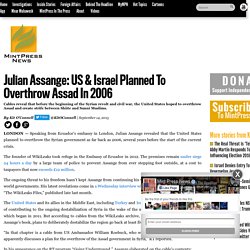 LONDON — Speaking from Ecuador’s embassy in London, Julian Assange revealed that the United States planned to overthrow the Syrian government as far back as 2006, several years before the start of the current crisis. The founder of WikiLeaks took refuge in the Embassy of Ecuador in 2012. The premises remain under siege 24 hours a day by a large team of police to prevent Assange from ever stepping foot outside, at a cost to taxpayers that now exceeds £12 million. The ongoing threat to his freedom hasn’t kept Assange from continuing his work revealing the dirty secrets of world governments.

Death in Syria. More than 200,000 people have been killed in the four-and-a-half-year Syrian civil war. 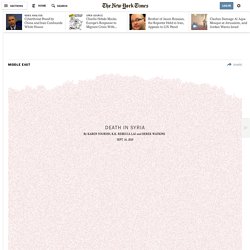 The constant violence has forced more than four million toflee the country, fueling a refugee crisis in the Middle Eastand Europe. The country is so dangerous that a definitive tallyof deaths is not possible, but several groups are trying todocument how many Syrians have died, and what killed them. Each of these dots represents oneperson who was killed during the conflict. Syria ~ Map Update dd July 1, 2015 « pietervanostaeyen. Israel's Heavy Hand In Syria's Civil War. Israeli soldiers walks near the border with Syria near the site of a Sunday Israeli airstrike, in the Israeli controlled Golan Heights, Monday, April 27, 2015 When Israel conquered the Golan in 1967, it launched a 50-year occupation of the Syrian Golan in which tens of thousands of Syrian Druze lived. 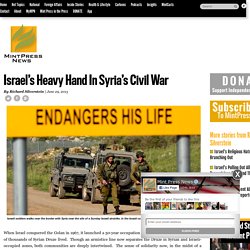 Though an armistice line now separates the Druze in Syrian and Israeli-occupied zones, both communities are deeply intertwined. The sense of solidarity now, in the midst of a raging civil war, is no different than Diaspora Jews felt in 1967 before the war broke out. Millions rallied around the world concerned about Israel’s fate. Ben Swann Truth in Media: What The Media Isn't Telling You About Syria.

While US Prepares for More War in Syria, Russia was Brokering Peace. “Kremlevskaya Naberezhnaja Moscow hires” by Dmitry Azovtsev. Moscow, Russia (nsnbc) – Recent talks with the Syrian government and opposition resulted in the first adoption of a joint agreement between the government and the opposition, prompting UN Special Envoy for Syria, Staffan de Mistura to stress that the international community should pay more attention to Moscow’s efforts. Speaking to the British The Independent, de Mistura said that it is time for the world to listen more closely to Russia with regard to Moscow’s effort to broker a peaceful resolution to the four-year-long conflict that has cost more than 210,000 lives and caused an unprecedented rise in Islamist terrorism. De Mistura stressed the long-standing ties between Damascus and Moscow and added that Russia cannot manage to bring about a peaceful resolution without the help of others.

US Officials Blow the Whistle on Secret CIA, Mossad Ops. Aaron Nelson February 2, 2015 (ANTIMEDIA) Detonating a car bomb in a civilian-populated area and denying any involvement in the attack is called terrorism when our enemies do it. But what if the terror attack is backed by Israel and the United States? Speaking only under the condition of anonymity, 5 former U.S. intelligence officials told The Washington Post that the Central Intelligence Agency tracked Imad Mughniyah for at least a year before killing him in a joint operation with the Israeli Secret Intelligence Service.

Tangled web fight for syria. Syria Becomes the 7th Predominantly Muslim Country Bombed by 2009 Nobel Peace... How the War in Syria is About Oil, not ISIS - The Anti-Media. Carl Gibson “… the Persian Gulf, the critical oil and natural gas-producing region that we fought so many wars to try and protect our economy from the adverse impact of losing that supply or having it available only at very high prices.” -John Bolton, George W.

The first was the difficulty of sustaining public support for a new years-long war against ISIS, a group that clearly posed no imminent threat to the “homeland.” A second was the lack of legal justification for launching a new bombing campaign with no viable claim of self-defense or U.N. approval. We can do it. Obama Admits Plan in Syria is to Overthrow Assad - The Anti-Media. Justin King (TheAntiMedia) September 29, 2014. Why is the World Ignoring the Revolutionary Kurds in Syria? Editor's note: Syrian Kurds with the PKK are reportedly holding back ISIS fighters at Kobani. If ISIS prevails, a massacre is almost inevitable. Demonstrations have already been held three times this week in Union Square. Arm the Syrian rebel. The McCain-ISIS Conspiracy. [Obscure blogs and their new "discoveries" about old pictures] In their efforts to expose cabals and plots around the world, conspiracy theorists often have one major obstacle to overcome: falsehood.

On the other hand, conspiracy thinkers are just as often quick to consume and disseminate the fantasy tales thrown at them. Lack of rational thought, ignorance of facts and an inclination to speculate are a few reasons for this. Cooking up conspiracy theories may therefore not be a very hard job, but it’s still a job. A too high level of ridiculousness could translate into a major fail. Refugees. “We Are Still Here” Let me be clear. How Syria’s Assad Helped Forge ISIS. A man holds a roll of pictures of Syrian President Bashar al-Assad during a rally in support of him at al-Umawiin square in Damascus June 21, 2011. Khaled al-Hariri/Reuters Mohammed Al-Saud is under no illusions. “In 2011, the majority of the current ISIS leadership was released from jail by Bashar Al Assad,” he said.