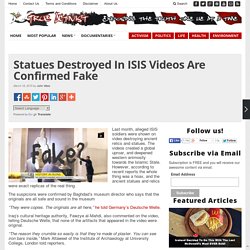 The videos created a global uproar, and deepened western animosity towards the Islamic State. However, according to recent reports the whole thing was a hoax, and the ancient statues and relics were exact replicas of the real thing. DHS Claims ISIS Terrorists Could Be Working In Mall Kiosks. By: MassPrivateI - The news had security analysts examining potential vulnerabilities in those relatively anonymous purveyors of bedazzled cellphone accessories, cheap jewelry, and names emblazoned on grains of rice. 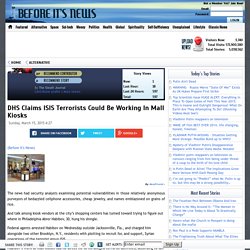 And talk among kiosk vendors at the city’s shopping centers has turned toward trying to figure out where in Philadelphia Abror Habibov, 30, hung his shingle. Federal agents arrested Habibov on Wednesday outside Jacksonville, Fla., and charged him alongside two other Brooklyn, N.Y., residents with plotting to recruit for, and support, Syrian operations of the terrorist group ISIS. Habibov’s work at mall kiosks had no direct tie to his alleged terrorist activities, according to law enforcement sources who have been briefed on the case against the men.

Boko Haram leader supports ISIS, Sudan President claims both are CIA, Mossad creations. | WTF News | An audio message reportedly from Nigeria’s Boko Haram claims the group has pledged their allegiance to the Islamic State militant group in Iraq and Syria (ISIS), according to a tweet published Saturday on the group’s suspended Twitter account. 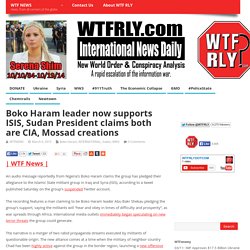 The recording features a man claiming to be Boko Haram leader Abu Bakr Shekau pledging the group’s support, saying the militants will “hear and obey in times of difficulty and prosperity”, as war spreads through Africa. International media outlets immediately began speculating on new terror threats the group could generate. The narrative is a merger of two rabid propaganda streams executed by militants of questionable origin. How Was ISIS Created? New Report Cracks Media Blackout [VIDEO] 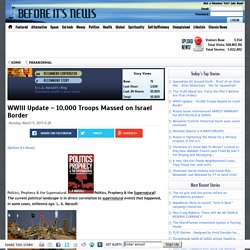 The current political landscape is in direct correlation to supernatural events that happened, in some cases, millennia ago. L. US, Israeli Military Advisors Accused of Aiding ISIL Arrested in Iraq. US, Israeli Military Advisors Arrested In Iraq, Accused Of Aiding ISIS. It has been reported that American and Israeli military advisors have been arrested while aiding Islamic State (ISIS) terrorists in Iraq. 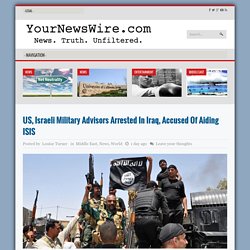 Iraqi counter-terrorism forces arrested four foreigners who were employed as military advisors to the ISIL fighters, Iraqi sources said. According to Iraq’s Sama News Agency, three of the arrested advisors had American and Israeli passports, and the fourth was a national from a Persian Gulf Arab state. Terrorists Supported by America: U.S. Helicopter Delivering Weapons to the Islamic State (ISIS), Shot Down by Iraqi “Popular Forces” 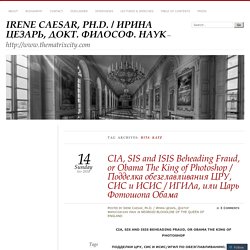 Bollywood craze of James Bond: On September 14, 2014, the Five Eyes are faking a warning of “Islamist” beheading the 47-year-old Alan Henning who is originally from the Greater Manchester area where he worked as a taxi driver and who would be the next person to die. ———- Мошенничество по обезглавливанию американцев и британцев агентами Моссада. Truth in Media: Origin of ISIS. The circus: How British intelligence primed both sides of the 'terror war' Reprinted from middleeasteye.net Every time there's a terrorist attack that makes national headlines, the same talking heads seem to pop up like an obscene game of "whack-a-mole". 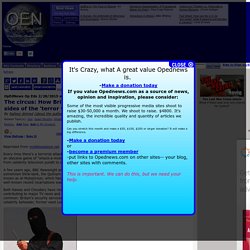 Farsnews. TEHRAN (FNA)- Iraq's army has shot down two British planes as they were carrying weapons for the ISIL terrorists in Al-Anbar province, a senior lawmaker disclosed on Monday. 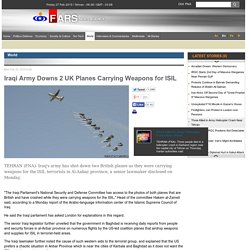 "The Iraqi Parliament's National Security and Defense Committee has access to the photos of both planes that are British and have crashed while they were carrying weapons for the ISIL," Head of the committee Hakem al-Zameli said, according to a Monday report of the Arabic-language information center of the Islamic Supreme Council of Iraq. He said the Iraqi parliament has asked London for explanations in this regard. The senior Iraqi legislator further unveiled that the government in Baghdad is receiving daily reports from people and security forces in al-Anbar province on numerous flights by the US-led coalition planes that airdrop weapons and supplies for ISIL in terrorist-held areas. Al-Zameli underlined that the coalition is the main cause of ISIL's survival in Iraq. What ISIS Really Wants.

What is the Islamic State?

But Adnani was not merely talking trash. I. Why Obama Can’t Say His Spies Underestimated ISIS. Japan’s media kept quiet about the kidnapping in Syria after being asked to show concern for the lives of the hostages. 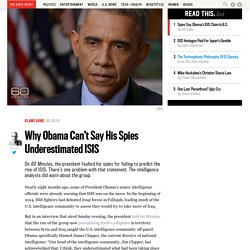 Why couldn’t their prime minister do the same? TOKYO—The Japanese government knew as early as mid-November that both Kenji Goto and Haruna Yukawa were hostages of ISIS, but its efforts to negotiate for their safe return were conducted in secret. Japan’s media were warned by the Ministry of Foreign Affairs to keep silent or risk the captives’ lives. Yet Prime Minister Shinzo Abe ignored that same explicit advice from his ministry and, in what some described as a “giddy” mood, he embarked last month on a long-planned Middle East tour.

IRENE CAESAR, PH.D. / ИРИНА ЦЕЗАРЬ, ДОКТ. ФИЛОСОФ. НАУК. Libyan jets bomb oil tanker in port. (Before It's News) The Libyan military has been battling Islamist militias, which have seized control of several cities Military jets have attacked a Greek-operated oil tanker in the Libyan port of Derna, killing two crew members, the Greek authorities have said. The attack, on Sunday, was carried out by the Libyan air force after the ship’s movements aroused suspicion, a Libyan military spokesman told the BBC. Stratfor: Ukraine Coup Plotted by US Over Russian Stance on Syria. Politics (updated 13:35 19.12.2014) It’s Not Just Conspiracy Theorists: This CIA Whistleblower Backs Up Claims ISIS (And Ebola) Were Made In The USA. Far from being an enemy, the growing terrorist army gives U.S government the green light for more endless war Stephen D Kelley is an ex CIA/NSA contractor who believes that ISIS is a “completely fabricated enemy”.

In this short radio interview with Press TV, the whistleblower points out that stopping the terror group’s funding would be the most logical and efficient way of crushing them. “For people to think this enemy is something to be attacked is a farce,” Kelley says. US Fires Nuclear Missiles As Saudi Secret Deal Backfires. World's Largest English Language News Service with Over 500 Articles Updated Daily "The News You Need Today…For The World You’ll Live In Tomorrow.

" What You Aren’t Being Told About The World You Live In. 10 Things About Gaddafi They Don’t Want You To Know. It’s almost 2015, and every single year more and more people are starting to question the information presented to them from mainstream western media outlets, and for good reason. What we are often presented with by corporate media, especially when it comes to political issues and war overseas is a twist of what’s really happening and sometimes even a fabrication of the story.

In ‘Targeted’ US Drone Strikes, Vast Majority Killed Are Those Not Targeted: Study. This mural is part of the 12 Hours Campaign in Sana’a, Yemen. Artists include Hadeel Almoafak, Hanan Alsurmi, Thi yazen Alalawi, and Murad Subay (Photograph courtesy of Murad Subay) The U.S. government’s so-called “pinpoint” drone strikes in Pakistan and Yemen are, in fact, leaving wide perimeters of death, as people on the Kill List are targeted—and even reported dead—again and again, according to a report published Monday by the UK-based charity Reprieve.

Fake News! CNN & BBC Busted! ISIS Is A Fake Threat!! 2014. U.S. wants to revive terror scare in order to keep up the terror war industry - FBI whistleblower — RT SophieCo. The University of Al-Qaeda? America's "Terrorist Academy" in Iraq Produced ISIS Leaders. 10 Myths About Obama’s Latest War in Iraq and Syria. Page 2 of Article: Neocons' Noses Into the Syrian Tent. Turn the Tables: Stopping Western Aggression in Syria. The Real Reason We Are Bombing Syria – Dennis Kucinich. A Syrian Resident Dots the 'I's on ISIS. Keeping Score on the Libya Intervention: Good Idea or Tragic Mistake? What To Do About ISIS - World Beyond War.

URGENT: ISIS leader Abu Bakr al-Baghdadi allegedly killed by US airstrikes. Red Alert: MSM Warns ISIS Sending 11 Missing Libyan Airliners To America On 9-11-2014 (Videos) Alarm over Saudi plan to remove tomb of Prophet Muhammad. America's Allies Are Funding ISIS. The Coded Message Obama Delivers When He Says ISIL Instead Of ISIS. Why Does ISIS Fit In So Perfectly With The PNAC Plan? The Covert Origins of ISIS. IAEA investigators: Audit reveals US, not Iran the problem.

Waking Up to Vladimir Putin’s Uncommon Common Sense. The “War On Terror” Is An Orwellian Lie – It Is Not Meant To Be Won, It Is Meant To Be Continuous. Obama Regime Beheading Horror Stuns Russia. U.S. Wants to Bomb ISIS In Syria ... Maybe We Should (cough) First Stop ARMING THEM? If You Haven’t Listened To It Yet Here It Is: Irish Senator Gives An Eye Opening Speech On Gaza.