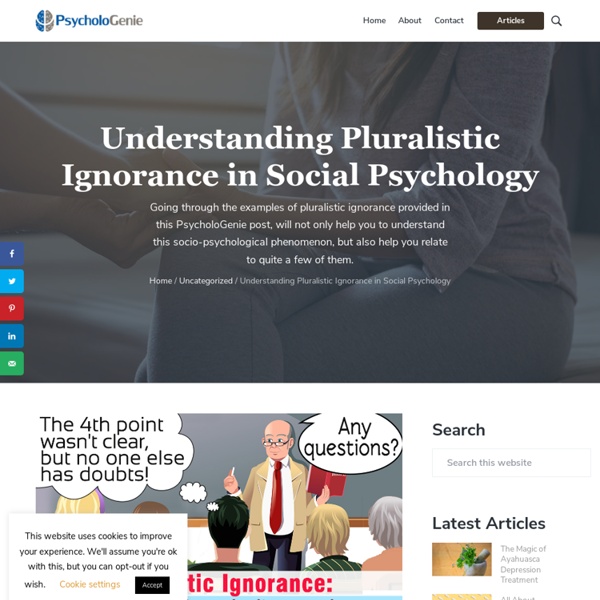 ﻿The Bystander Effect in Emergency Situations Mental Health The Bystander Effect in Emergency Situations By Karen Doll, Psy.D., L.P March 18, 2019 The term bystander effect has been described as the trap of inaction. Everyone's Confused In Meetings But No One Asks Questions - Here's What Needs to Change Picture this: You're in an important meeting with senior leadership. The CEO is sharing the firm's strategic plan, including how the company will "leverage big data to gain visibility into market opportunities producing measurable ROI". Um...what? You do a quick scan around the conference room. Heads nod in agreement as the CEO concludes.

What is Diffusion of Responsibility? Mental Health What is Diffusion of Responsibility? By Karen Doll, Psy.D., L.P September 9, 2020 Many of us have heard extreme stories of catastrophic events taking place and learning that there were people nearby who did not take action to help a victim in need. 'Bystander Effect' not exclusive to humans A rat is less likely to help a trapped companion if it is with other rats that aren't helping, according to new research from the University of Chicago that showed the social psychological theory of the "bystander effect" in humans is present in these long-tailed rodents. The study, titled "The Bystander Effect in Rats," also demonstrated that in the presence of other potential helper rats, rats are more, rather than less, likely to help. Whether helping is facilitated or suppressed depends on the circumstances rather than on personal temperament or morals, a finding with implications for human society. The research, published in the July 8 issue of Science Advances, builds off previous research on rat empathy.

A New York student was fatally stabbed while onlookers took a video of his suffering Tyler Flach is charged with second-degree murder in the death of 16-year-old Khaseen Morris, killed after a fight at a strip mall near Oceanside High School on Monday in Nassau County, New York. Flach was remanded into custody and is due back in court Monday, according to Brendan Brosh, a spokesman for the Nassau County District Attorney. Defense attorney Edward Sapone said Flach maintains his innocence. When the fight broke out Monday, a group of 50-70 teenagers looked on as Morris was assaulted and stabbed in the chest, according to Detective Lt.

The bystander effect in rats Abstract To investigate whether the classic bystander effect is unique to humans, the effect of bystanders on rat helping was studied. In the presence of rats rendered incompetent to help through pharmacological treatment, rats were less likely to help due to a reduction in reinforcement rather than to a lack of initial interest. Diffusion of Responsibility: Definition, Characteristics & Factors Diffusion of responsibility is defined as a psychological phenomenon in a social setting. Sometimes when an individual is in a group, he will hesitate to take any action as others are also present. This inaction and the inability to take responsibility is a type of attribution as he assumes that others are more liable to take action. This is called diffusion of responsibility and is often seen in the majority of people. It is also termed as a bystander effect as the people in the group stand like bystanders without offering any help to the person in need.