What is the Bystander Effect and How Can We Overcome it? - DefibsPlus 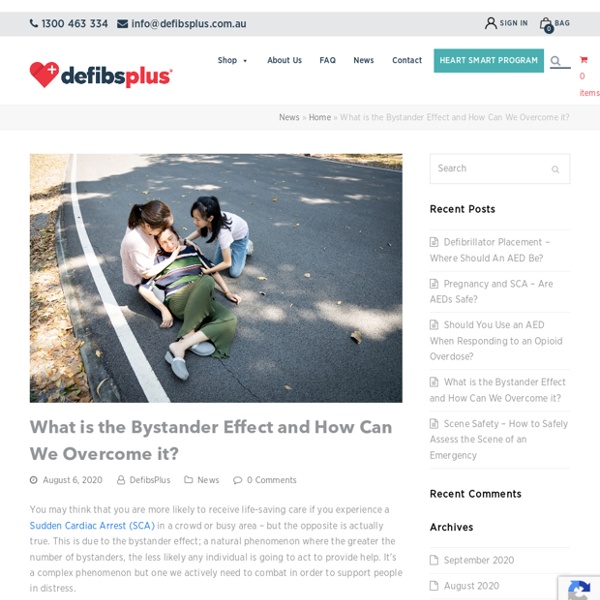 You may think that you are more likely to receive life-saving care if you experience a Sudden Cardiac Arrest (SCA) in a crowd or busy area – but the opposite is actually true. This is due to the bystander effect; a natural phenomenon where the greater the number of bystanders, the less likely any individual is going to act to provide help. It’s a complex phenomenon but one we actively need to combat in order to support people in distress. Understanding the Bystander Effect When an emergency situation occurs, people are more likely to take action if there are fewer people around. This reaction takes place for a number of reasons, including assumptions that: Someone else is already doing somethingSomeone else is more qualified to assistYou may hurt the person further rather than helping if you try assistYou may be punished (sued or held responsible) if you try to help and fail The Bystander Effect and SCA How to Counter the Bystander Effect AEDs and Defibrillator Training in Australia

Get to Know the Differences Between Infant, Child and Adult CPR Although responding to a sudden cardiac arrest (SCA) in a child or adult requires the same combination of rapid CPR and defibrillation, the differences in physiology mean you have to apply CPR a bit differently. Here are some tips from providers of CPR defibrillators and the Heart Smart Program, a leading CPR and defibrillator training program. How to Perform CPR on an Adult Place the heel of your hand with your palms down on the centre of the person’s chest. Place your other hand on top, interlocking your fingers.

Helping Kids Overcome the Bystander Effect Newscasters love to share stories of kids as young as three years old calling 911 to save a parent’s life. These stories bear out what research has shown us: Very young children have a propensity to be kind and helpful. Starting as early as 18 months, studies show, toddlers spontaneously help an adult who is unable to pick up something he dropped or finds himself in a similarly tricky situation. Being kind at a cost to themselves makes two year olds happy, and three year olds who cooperate on a task share rewards even when they don’t have to. But a recent study suggests that, like adults, kids are also subject to a major obstacle to helping: the bystander effect. That’s when being part of a group paralyzes people from coming to the aid of someone in need—a phenomenon well documented by social psychologists.

Anticipated Guilt for Not Helping and ... Introduction Imagine that you hear that the blood-supplies are running low in all hospitals in your part of the country. You know that you could help by visiting the nearby donor clinic on your way back from work and donate blood (it would take you around 30 min).

How to Stay Heart Healthy Through the Summer – Defibs Plus Blog Summer is a time for relaxing, recharging and enjoying quality time with friends and family – but to have the best summer, you need to stay heart healthy too! Here are some tips from leading suppliers of AEDs and defibrillators in Australia (we can get you the best defibrillator prices in town!) Manage the Heat For babies, seniors and those with serious medical conditions, the heat of summer can put a lot of extra strain on your body and heart, leading to heatstroke, dehydration, sunburn, heart attacks, sudden cardiac arrest (SCA) and heat stress. Please remember to:

Bystander Effect - Definition, Examples and Experiment Bystander Effect Definition The bystander effect, also called bystander apathy, is a term in psychology that refers to the tendency of people to take no action in an emergency situation when there are others present. This phenomenon is highly studied in the field of sociology. Bystander Effect Explained Psychologically, there are many causes of the bystander effect. How the Social Context Influences Helping – Principles of Social Psychology – 1st International Edition Review Bibb Latané and John Darley’s model of helping behavior and indicate the social psychological variables that influence each stage. Although emotional responses such as guilt, personal distress, and empathy are important determinants of altruism, it is the social situation itself—the people around us when we are deciding whether or not to help—that has perhaps the most important influence on whether and when we help. Consider the unusual case of the killing of 28-year-old Katherine “Kitty” Genovese in New York City at about 3:00 a.m. on March 13, 1964.

17 Exceptional Bystander Effect Statistics It’s a strange, but true fact: when there’s an emergency situation and there are a lot of bystanders there to witness it, the less likely it is that anyone from the crowd will step into help. Sometimes it is because of an assumption that somebody else is going to do it. Sometimes it is simply because people don’t looked concerned and this will then justify a decision of inaction. When there are four or more people who are bystanders to an emergency situation, the likelihood that at least one of them will help is just 31%.