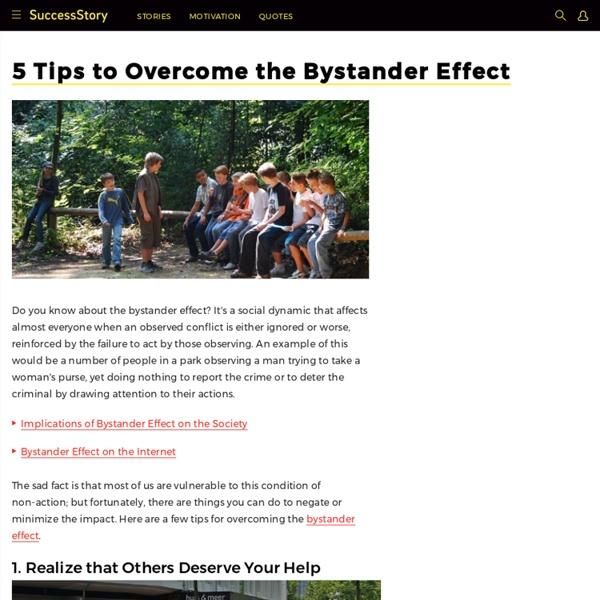 Do you know about the bystander effect? It's a social dynamic that affects almost everyone when an observed conflict is either ignored or worse, reinforced by the failure to act by those observing. An example of this would be a number of people in a park observing a man trying to take a woman's purse, yet doing nothing to report the crime or to deter the criminal by drawing attention to their actions. The sad fact is that most of us are vulnerable to this condition of non-action; but fortunately, there are things you can do to negate or minimize the impact. Here are a few tips for overcoming the bystander effect. 1. People tend to take action more often when they feel that someone is more worthy of their attention. The lesson to take from this is: when you are not taking any sort of action to be helpful, consider your reasons carefully. 2. That's right. 3. 4. Many times, people want to do something but they feign indifference in the belief that someone else will step in. 5.

How To Counteract The Bystander Effect - University of Pittsburgh Student EMS Counteracting The Bystander Effect It is a beautiful spring day in Oakland. There are just a few weeks left until summer break and everyone is ready to go home. How the Social Context Influences Helping – Principles of Social Psychology – 1st International Edition Review Bibb Latané and John Darley’s model of helping behavior and indicate the social psychological variables that influence each stage. Although emotional responses such as guilt, personal distress, and empathy are important determinants of altruism, it is the social situation itself—the people around us when we are deciding whether or not to help—that has perhaps the most important influence on whether and when we help. Consider the unusual case of the killing of 28-year-old Katherine “Kitty” Genovese in New York City at about 3:00 a.m. on March 13, 1964. Her attacker, Winston Moseley, stabbed and sexually assaulted her within a few yards of her apartment building in the borough of Queens. During the struggle with her assailant, Kitty screamed, “Oh my God!

Yue Yue dead: Chinese girl Wang Yue, 2, run over as bystanders watch, dies Yue Yue, the girl who shamed China, is dead: Two-year-old run over TWICE as dozens of people ignored her lying in the road succumbs to her injuries Announcement of her death quickly became the most talked about topic on China's version of TwitterLawmakers set to meet to discuss introduction of 'Good Samaritan' legislationCountry's economic boom and disparity between rich and poor have made changing social values a contentious topic By Richard Hartley-parkinson Updated: 09:25 EDT, 5 November 2011 The Chinese girl left bleeding in a road after being run over by two different vehicles and then ignored by 18 passersby has finally died.

What is the Bystander Effect and How Can We Overcome it? - DefibsPlus You may think that you are more likely to receive life-saving care if you experience a Sudden Cardiac Arrest (SCA) in a crowd or busy area – but the opposite is actually true. This is due to the bystander effect; a natural phenomenon where the greater the number of bystanders, the less likely any individual is going to act to provide help. It’s a complex phenomenon but one we actively need to combat in order to support people in distress.

Larry Froistad (1998) October 9, 1998 By THE ASOOCIATED PRESS ICKINSON, N.D. -- A man who confessed on the Internet to killing his daughter by setting their house on fire was sentenced to 40 years in prison Thursday by a judge who said the man broke the "most basic law of nature." "Living creatures ... protect their young," Judge Maurice Hunke of Southwest District Court told the man, Larry Froistad Jr. "You chose to cause the death of the most vulnerable victim there could be -- a child, your child."

The Bystander Effect and Altruism Learning Objectives Explain the factors that influence human altruism, including reciprocal altruism and diffusion of responsibility. Go to YouTube and search for episodes of “Primetime: What Would You Do?” The Shocking Murder of Ilan Halimi In 2006 a young Parisian Jew was kidnapped and brutally murdered because he was Jewish. French authorities initially refused to believe it was a hate crime. This article originally appeared in Ami Magazine. Little did Ilan Halimi know that day that the customer walking into the cellphone store where he worked as a salesman would be the agent of his death. The young woman looked around at the merchandise, asked questions and engaged him in friendly conversation.

Anticipated Guilt for Not Helping and ... Introduction Imagine that you hear that the blood-supplies are running low in all hospitals in your part of the country. You know that you could help by visiting the nearby donor clinic on your way back from work and donate blood (it would take you around 30 min). Now imagine a similar situation, but where the donor clinic is located far away (it would take you around 4 h to go there and donate blood). How would you feel in both these situations in case you decided to help, or in case you decided not to help?

Khaseen Morris: Teen held for killing that bystanders filmed Image copyright Nassau County Police A New York teenager has been charged with the fatal stabbing of a 16-year-old boy whom bystanders filmed bleeding to death. Tyler Flach, 18, is accused of second-degree murder in the deadly after-school brawl that broke out not far from the victim's Long Island school. Remembering Ilan Halimi The murder of four people in the Hyper Cacher kosher store in Paris in January 2015 served as a wake-up call to Europe and much of the world what French Jews had known for a long time: European antisemitism was back, and with a vengeance. This attack, coming on the heels of the Charlie Hebdo atrocity, could no longer be ignored. The vicious hatred for Jews that had been bubbling just under the surface among Europe's Islamist extremists—not to mention the far-right and far-left political fringes—had boiled over.

Online Bullying and the Bystander Effect Melania Trump will become First Lady of the United State in January. She recently said that as First Lady she will dedicate herself to fighting online bullying. “Technology has changed our universe,” she said. “Our culture has gotten too mean and too rough especially to children and to teenagers… We have to find a better way to talk to each other, to disagree with each other, to respect each other.” The irony was not lost on many. Throughout the 2016 campaign, Ms.

This article summarises a few tips we can follow to counteract the Bystander Effect: 1. Realising that others deserve our help 2. Realising that the victim could have been me one day 3. Avoiding eye contact with the victim shows we are affected by the Bystander Effect, we should learn to recognise it and break the cycle 4. Get other passerby to help out too 5. Report the incident as a witness by yqichan001 Sep 19