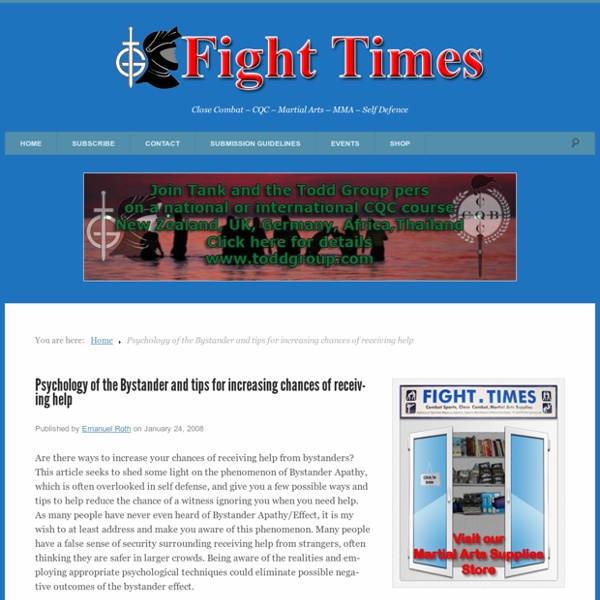 Will I intervene? Bystanders must weigh the costs or dangers of intervening. Will I be harmed? Will I be sued? People are often concerned about getting in trouble if something goes wrong while helping (liability issues). Let's start with examining each question closely and finding possible ways to maximize a positive outcome.

If You’re in Danger, Will Bystanders Help? Almost every psychology student knows about Kitty Genovese, the 28-year-old Queens woman who was stabbed to death in 1964. At the time, the New York Times reported that no one had lifted a finger to rescue her. Though that story was later debunked—some people did call the police or shout down the assailant—Genovese’s death provoked a flurry of research on what’s now called the bystander effect. According to decades of experiments, the more people who are observing someone in trouble, the less likely each person is to help. Today, however, new studies are calling the bystander effect into question—and sketching a somewhat sunnier picture of human nature.

Are You a Hero or a Bystander? We all wonder how we would react in an emergency. Would we risk our lives to help someone in danger? Laurie Ann Eldridge found out last year. Anticipated Guilt for Not Helping and ... Introduction Imagine that you hear that the blood-supplies are running low in all hospitals in your part of the country. You know that you could help by visiting the nearby donor clinic on your way back from work and donate blood (it would take you around 30 min). Now imagine a similar situation, but where the donor clinic is located far away (it would take you around 4 h to go there and donate blood).

What is the Bystander Effect and How Can We Overcome it? - DefibsPlus You may think that you are more likely to receive life-saving care if you experience a Sudden Cardiac Arrest (SCA) in a crowd or busy area – but the opposite is actually true. This is due to the bystander effect; a natural phenomenon where the greater the number of bystanders, the less likely any individual is going to act to provide help. It’s a complex phenomenon but one we actively need to combat in order to support people in distress. Understanding the Bystander Effect When an emergency situation occurs, people are more likely to take action if there are fewer people around. This reaction takes place for a number of reasons, including assumptions that:

5 Effective Tips to Overcome the Bystander Effect Do you know about the bystander effect? It's a social dynamic that affects almost everyone when an observed conflict is either ignored or worse, reinforced by the failure to act by those observing. An example of this would be a number of people in a park observing a man trying to take a woman's purse, yet doing nothing to report the crime or to deter the criminal by drawing attention to their actions. The sad fact is that most of us are vulnerable to this condition of non-action; but fortunately, there are things you can do to negate or minimize the impact. Here are a few tips for overcoming the bystander effect. 1.

17 Exceptional Bystander Effect Statistics It’s a strange, but true fact: when there’s an emergency situation and there are a lot of bystanders there to witness it, the less likely it is that anyone from the crowd will step into help. Sometimes it is because of an assumption that somebody else is going to do it. Sometimes it is simply because people don’t looked concerned and this will then justify a decision of inaction. When there are four or more people who are bystanders to an emergency situation, the likelihood that at least one of them will help is just 31%. Bystander Effect Facts The kindness of strangers: Are good Samaritans the exception or norm? Image copyright Mark Levine If you saw someone being attacked on the street, would you help? Or would you reason that it's none of your business and walk on by? Britain has been called a "bystander society" but recent events demonstrate people are prepared to go to the aid of those who need it. Babur Karamat Raja, a 41-year-old company director, has been jailed for 18 years for the attempted murder of his pregnant partner in Birmingham.

From Empathy to Apathy: The Bystander Effect Revisited - Ruud Hortensius, Beatrice de Gelder, 2018 When people are asked whether they would spontaneously assist a person in an emergency situation, almost everyone will reply positively. Although we all imagine ourselves heroes, the fact is that many people refrain from helping in real life, especially when we are aware that other people are present at the scene. In the late 1960s, John M. Darley and Bibb Latané (1968) initiated an extensive research program on this so-called “bystander effect.” In their seminal article, they found that any person who was the sole bystander helped, but only 62% of the participants intervened when they were part of a larger group of five bystanders. Following these first findings, many researchers consistently observed a reduction in helping behavior in the presence of others (Fischer et al., 2011; Latané & Nida, 1981).

10 Notorious Cases of the Bystander Effect The bystander effect is the somewhat controversial name given to a social psychological phenomenon in cases where individuals do not offer help in an emergency situation when other people are present. The probability of help has in the past been thought to be inversely proportional to the number of bystanders. In other words, the greater the number of bystanders, the less likely it is that any one of them will help. This list describes the prototype of the effect and cites nine particularly heinous examples. The Parable of The Good Samaritan What Is the Bystander Effect? If you witnessed an emergency happening right before your eyes, you would certainly take some sort of action to help the person in trouble, right? While we might all like to believe that this is true, psychologists suggest that whether or not you intervene might depend upon the number of other witnesses present. What Is the Bystander Effect? The term bystander effect refers to the phenomenon in which the greater the number of people present, the less likely people are to help a person in distress. When an emergency situation occurs, observers are more likely to take action if there are few or no other witnesses. Being part of a large crowd makes it so no single person has to take responsibility for an action (or inaction).