Bond. Warning: This fic is SLASH. 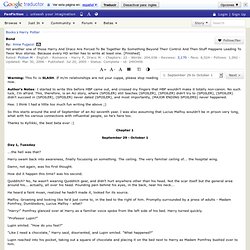 If m/m relationships are not your cuppa, please stop reading now. Author's Notes: I started to write this before HBP came out, and crossed my fingers that HBP wouldn't make it totally non-canon. No such luck, I'm afraid. Chaos Theory. Chapter Text To be great is to be misunderstood.Oscar Wilde. 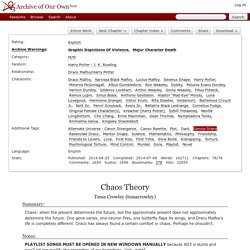 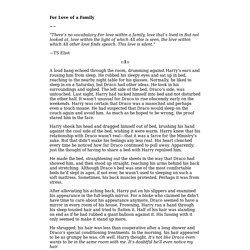 This love is silent.” —TS Eliot A loud bang echoed through the room, drumming against Harry’s ears and rousing him from sleep. He rubbed his sleepy eyes and sat up in bed, reaching to the nearby night table for his glasses. Harry shook his head and dragged himself out of bed, brushing his hand against the cool side of the bed, wishing it were warm. He made the bed, straightening out the sheets in the way that Draco had showed him, and then stood up straight, reaching his arms behind his back and stretching. Helix. Here's The Pencil, Make It Work. Here's The Pencil, Make It Work May 1999 The first time Harry Potter sees Draco Malfoy after the post-war trials, the one year anniversary of the Battle of Hogwarts is drawing to a close, and Harry is well on his way to getting thoroughly smashed. 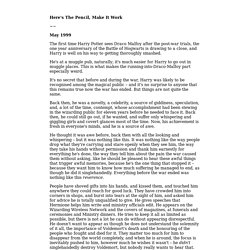 He's at a muggle pub, naturally; it's much easier for Harry to go out in muggle places. This is what makes the running-into-Draco-Malfoy part especially weird. It's no secret that before and during the war, Harry was likely to be recognised among the magical public – and it's no surprise to anyone that this remains true now the war has ended. It's Not A Love Potion. Prologue "Fuck you, Zabini! 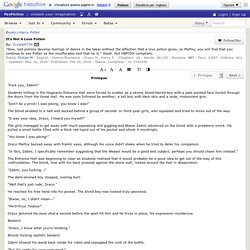 " Students milling in the Hogwarts Entrance Hall were forced to scatter as a skinny blond-haired boy with a pale pointed face hurled through the doors from the Great Hall. He was soon followed by another; a tall boy with dark skin and a wide, malevolent grin. "Don't be a prick! Let Me Be Your Voice. Let Me Be Your Voice Harry shifted uncomfortably in his seat of honour in Courtroom Ten of the Ministry of Magic. 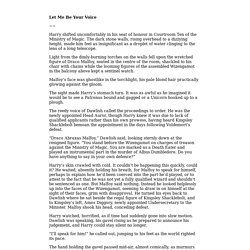 The dark stone walls, rising overhead to a dizzying height, made him feel as insignificant as a droplet of water clinging to the lens of a long telescope. Light from the dimly-burning torches on the walls fell upon the wretched figure of Draco Malfoy, seated in the centre of the room, shackled to his chair with chains while the looming figures of the assembled Wizengamot in the balcony above kept a sentinel watch. Malfoy’s face was ghostlike in the torchlight, his pale blond hair practically glowing against the gloom. The sight made Harry’s stomach turn. Living with Dragons. Living with Dragons Four figures sat bundled against the cold that even Hermione’s Warming Charms couldn’t defeat. 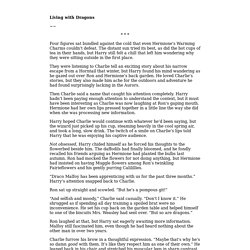 The distant sun tried its best, as did the hot cups of tea in their hands, but Harry still felt a chill that left him wondering why they were sitting outside in the first place. They were listening to Charlie tell an exciting story about his narrow escape from a Horntail that winter, but Harry found his mind wandering as he gazed out over Ron and Hermione’s back garden.

Mental. Disclaimer: I don't own any of these guys or places. 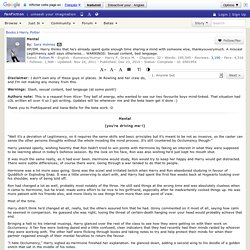 JK Rowling and her crew do, and I'm not making any money from this. Warnings: Slash, sexual content, bad langauge (at some point!) Authors note: This is a request from Alice- Tiny ball of energy, who wanted to see our two favourite boys mind-linked. That situation had LOL written all over it so I got writing. Updates will be whenever me and the beta team get it done :) Obliviation. Part One Chapter One Harry met the new and improved Draco Malfoy on a Tuesday afternoon. 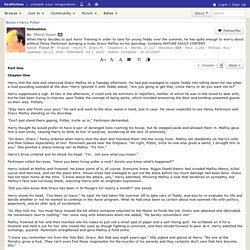 He had just managed to cajole Teddy into sitting down for tea when a loud pounding sounded at the door. Quietus. Quietus and kisses are a better fate than wisdom -E. 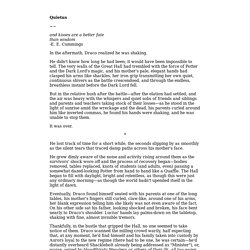 E. Cummings In the aftermath, Draco realized he was shaking. Reparations. Reparations - chapter one - by Sara's Girl Warnings: Slash. Snark. A number of original characters. Tempus Fugit. Chapter 1: Recipe For Disaster I think that God, in creating man, somewhat overestimated his ability. . ~*~ To Be Back Again in the Rest of the Room. Harry wakes up with half of his face flaming with pain. He doesn’t know if it’s the pain that woke him up or if his attacker punched him as he was awakening.

But he wishes like hell that whatever mess he’s in or whoever hit him, they’ll let him sleep a bit more. It’s only after a few more seconds that he realises there’s no bed under him, and that he’s not even lying down. ‘What the hell?’ He half-moans, half-shouts, opening his eyes to a large and empty room. Turn. Turn - chapter one – by Sara's Girl Disclaimer: I don't own Potterverse, 'The Family Man', on which this is very loosely based, or a working sense of smell. Life is hard.

Two Sides of the Same Coin. "When love is suppressed hate takes its place. " - Havelock Ellis Eleven-year-old Draco Malfoy was standing perfectly still, admiring his reflection in the mirror. A frumpy middle-aged witch pinned his new robes, and he sighed. Draco's gray eyes stared back at him from the mirror and his reflection gave a small wave, accompanied by a hesitant upturn of thin pink lips. The corporeal Draco frowned at his effeminate features: the soft white-blond hair smoothed back from his pale skin, the delicate pink lips, the thick white-blond lashes framing gray eyes.

White Lies. Disclaimer: Harry Potter does not belong to me, it belongs to J.K. Rowling, I don't make money out of this, and all characters in this fanfic are of legal age. A Young Radical’s Guide to Love.