Make Professional Looking Front Panels for Your Next DIY Project : 7 Steps. There's a lot of free software out there. 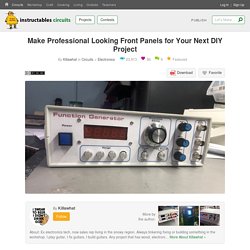 Just do a google search for free panel design software. The one I used for this project was Front Panel Express. The software is free, easy to use and lets you design front panels (ultimately to be professionally made). However you can print it as a layout (with drill holes) and/or a finished looking design. I'm not planning on showing you exactly how the software works. To start off with, draw on paper an outline of your panel. Once you've downloaded and installed the software, start it up and select a new project. Start by assigning a reference point for all your measurements. In the pictures above, there's several stages of me designing the front panel. Once you're happy with your design, save it. Front Panel Express Your Expert for Front Panels and Enclosures.

- Build the LASER SPY DEVICE - Page 1 of 18. Build the long range Laser Spy system The Laser Spy System is considered by many to be the Holy Grail of high tech spy devices because it can give the user the ability to listen in on conversations that take place in a distant building without having to install a bug or transmitter at the location. 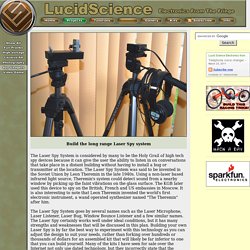 The Laser Spy System was said to be invented in the Soviet Union by Leon Theremin in the late 1940s. Using a non-laser based infrared light source, Theremin's system could detect sound from a nearby window by picking up the faint vibrations on the glass surface. The KGB later used this device to spy on the British, French and US embassies in Moscow. It is also interesting to note that Leon Theremin invented the world's first electronic instrument, a wand operated synthesizer named "The Theremin" after him. The Laser Spy System goes by several names such as the Laser Microphone, Laser Listener, Laser Bug, Window Bounce Listener and a few similar names. 10 BEST Tips & TRICKS with a sample CABLE TIES.

Info: Variable inductors used in HF antenna matching networks. Home. Using laser pointers for voice communications. Lasers versus LEDs: Readers of this, the modulatedlight.org web site, should be well-aware that it it our contention that for some applications, non-coherent light is preferred over coherent light: The atmosphere de-coheres light. 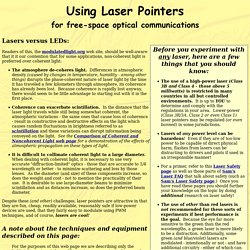 Differences in atmospheric density (caused by changes in temperature, humidity - among other things) disrupts the phase-coherent nature of laser light by the time it has traveled a few kilometers through atmosphere, its coherence has already been lost. Because coherence is rapidly lost anyway, there would seem to be little advantage to starting out with it in the first place. Coherence can exacerbate scintillation. For the purposes of this web page we are describing only the hobbyist/experimental use of lasers to convey voice or low-speed digital information. Www.diyaudiovillage.net - Index. The 10 Most Common National Electric Code Violations. To help you understand which electrical protection goes where, consider what each type of breaker was designed to do and make sure to follow the national electric code. 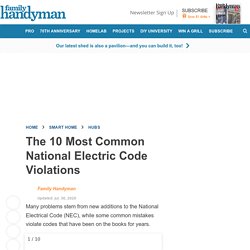 Standard Circuit Breaker Circuit breakers protect home electrical wiring and equipment like furnaces, air conditioners, dryers and stoves. Standard circuit breakers are better at protecting wiring and equipment than preventing fires and protecting people. That’s why they have largely been replaced by GFCIs and AFCIs. How to build a bluetooth speaker. A do-it-yourself adventure. Let’s be honest. 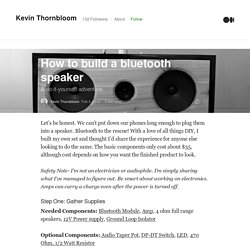 We can’t put down our phones long enough to plug them into a speaker. Bluetooth to the rescue! With a love of all things DIY, I built my own set and thought I’d share the experience for anyone else looking to do the same. The basic components only cost about $35, although cost depends on how you want the finished product to look. NASA Workmanship Standards : National Aeronautics and Space Administration : Free Download, Borrow, and Streaming. PartsBox: Take control of your parts inventory and BOM pricing. 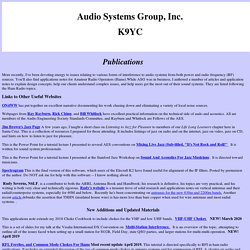 You'll also find applications notes for Amateur Radio Operators (Hams).While ASG was in business, I authored a number of articles and application notes to explain design concepts, help our clients understand complex issues, and help users get the most out of their sound systems. They are listed following the Ham Radio topics. Links to Other Useful Websites ON4WW has put together an excellent narrative documenting his work chasing down and eliminating a variety of local noise sources. Webpages from Ray Rayburn, Rick Chinn, and Bill Whitlock have excellent practical information on the technical side of audo and acoustics. N1CKX Main Page. I am just adding this section.I will be tying this to my You Tube andputting photos of projects and repairs here.For now however I need to update the travelpage as I have neglected this for a couple of years.When this section becomes filled I will add links to the You Tube Videos.NOTE! 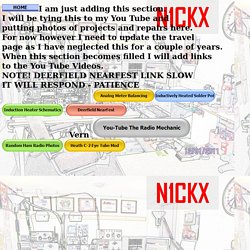 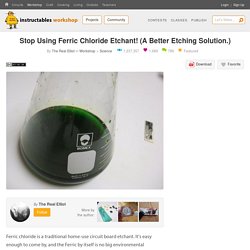 Please leave a comment if you've got any corrections and/or additions to this stuff!) I stumbled on this idea when I saw this website: Etching with Air Regenerated Acid Cupric Chloride by Adam Sechelle. Cupric chloride can be re-used indefinately by topping up the acid levels and adding oxygen (bubbled in from the atmosphere). Sounds cheap and environmentally friendly to boot. The website's got a lot of good chemistry info on cupric chloride etching. To make the cupric chloride solution, he dissolves a bunch of copper wire in hydrochloric acid, and mentions maybe using hydrogen peroxide to speed up the oxidation, but doesn't go into detail. Which got me thinking. Modification of the Pantum 2502W for Direct Laser Printing of Printer Circuit Boards : 16 Steps (with Pictures) - Instructables.

We are now going to take the printer apart a bit (actually quite a bit) and remove a bunch of parts we don't need. 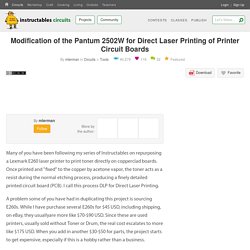 In my E260 Instructables I provided a comprehensive Service Manual that detailed the removal and replacement of most of the key components of the printer. Unfortunately, there seems to be no equivalent Service Manual for the Pantum 2502W, so I have included a lot more photos and descriptive text. If you run into trouble, look at the photos! When you remove screws, but sure to note which screw came from where so that you can replace them correctly when you reassemble the printer. Remove screw located under black and white warning label on the top right side, just in front of the yellow warning label. 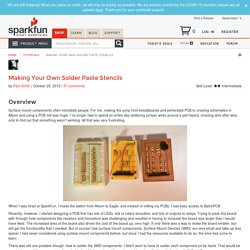 Homebrew spectrum analyser. I decided to try my hand at building a spectrum analyser after seeing the design by Roger Blackwell, G4PMK, in the Radio Communication Handbook5. I had to adapt the design because I couldn't get the Motorola MC 3356 IC he used. This is an account of what I came up with, how it performed and how it could be improved. Figure 1 is a block diagram of the analyser. Aircraft Transmission Receiver. Using an old RC transmitter to control your Arduino Projects – Brainy-Bits. We all have that old Radio Controlled helicopter, plane, drone… That we bought, played with it once or twice, crashed once, twice, three times, and now it’s just there collecting dust.

Well why not use the transmitter and receiver to control an Arduino project at great distances. The range on even the simplest of RC transmitter is around 300-500 feet, which is much better than any Bluetooth or WiFi connection. Homemade Electronics - HomemadeTools.net. Electronics Projects Circuits. Making Electric Circuits and Other Electronics Projects. Electricity is the energy that fuels machines and devices. Electricity moves through wires that can be either short or very long. Electricity is also transformable into different types of energy, making it versatile.

It may seem that electricity and electronics are synonymous, but there are slight differences in these terms. An electrical device generates or uses significant amounts of electrical power. An electronic device has semiconductor components inside it that enable it to control something. 1001+ Free Electronics Projects & Ideas for Engineers. Generate Power Using Microturbine. Presented here is the Hydropower Generation circuit that generates power from a water pipe in a building using a microturbine.

The generated electricity can be used to charge batteries, which can be used for emergency lighting or other such purposes. Overhead water tanks are placed on the terrace of the house and filled from the underground sump or borewell using an electric pump for domestic use. Hardware Archives – Particle Blog. Uni-Directional WIFI Range Extender: 5 Steps. AdWords We use AdWords to deploy digital advertising on sites supported by AdWords. Ads are based on both AdWords data and behavioral data that we collect while you’re on our sites. The data we collect may include pages you’ve visited, trials you’ve initiated, videos you’ve played, purchases you’ve made, and your IP address or device ID.

This information may be combined with data that AdWords has collected from you. We use the data that we provide to AdWords to better customize your digital advertising experience and present you with more relevant ads. Selecting a Step Motor and Driver for an Arduino Automated Shade Screen Project: 12 Steps. Have a Cordless Tool Battery Won't Recharge? You Can Fix That.The Art of Doing Stuff. Lithium ion batteries are a wondrous invention that are lightweight and long lasting. But it’s infuriating when the battery won’t recharge. Submarine Cable Map.