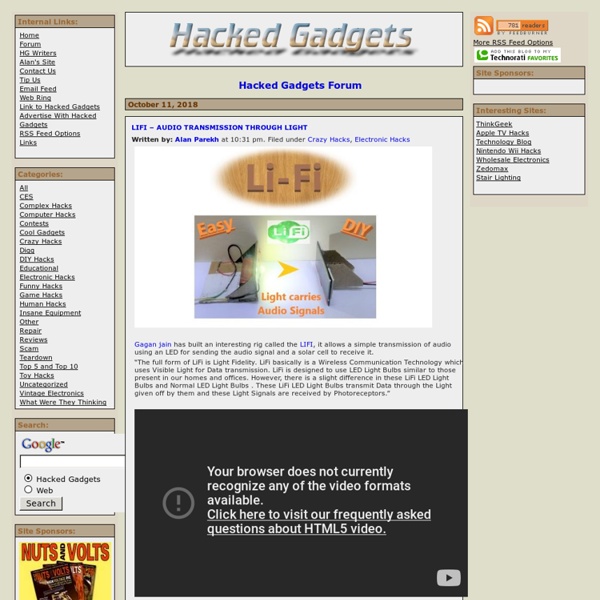 deba168 from India designed and built this Arduino Solar Charge Controller to provide electrical power in areas where the grid can’t always provide power when needed. Code and schematics are provided so you can get some inspiration from the design. ”At first the charge controller will check the solar panel voltage and compare it with battery voltage ,If it is greater then the Arduino will starts sending pulse width modulation(PWM) signals to the mosfet(Q1) in order to charge the battery .When the solar panel voltage was below the battery voltage ,this pwm signals will not send by Arduino . Then next the micro controller will check the battery voltage ,if the battery voltage was below 6.96 v volts then the battery will be charged in boost mode ,that mean the battery will be charged with maximum amperage ,this boost mode of charging will be done by sending pulse width modulation signals with 95% duty cycle .

Complex Hacks - Hacked Gadgets - DIY Tech Blog When you want to make a project small you might grab an Arduino Pro Mini instead of a full sized Arduino board but what if your project needs to fit into a blood vessel? F. Levent Degertekin, a professor in the School of Mechanical Engineering at the Georgia Institute of Technology is developing some miniature technology that will revolutionize how medical doctors will look at the heart and blood vessels. Via: Electronics Lab “The device integrates ultrasound transducers with processing electronics on a single 1.4 millimeter silicon chip. On-chip processing of signals allows data from more than a hundred elements on the device to be transmitted using just 13 tiny cables, permitting it to easily travel through circuitous blood vessels.

inaluxe Yipe! more rain, wind and sunshine, good ol' nature just doesn't stop. After some 20 plus years of neglect (aside from the most pragmatically brutal trimming) the garden we inherited with our newish property has flourished after the first decent winter-spring and summer rains in close to 15 years. My old hometown has been part of a drought affected area for that whole time, lakes that I swam in as a kid, ceased to exist. However, it seems with our arrival last year, the weather pattern has swung back to a slightly distorted, but familiar pattern. Hot hot heat in summer, and rainfall in winter.

- StumbleUpon You'll only need basic tools to build a cold frame. Since the cold frame will be pretty large, it's best to build it outside or in a garage, or you may not get it out the door... A hand-held drill (cordless or corded) A miter saw (powered is better, but you could do it with a hand saw and miter box) A jig saw, circular saw or table saw (really, anything that can cut large sheets of plywood) A screw driver A Tape Measure A marking implement of some sort A paint brush Two, Three or Four windows, with at least one dimension in common Some 2x2s (as required) Some 2x3s (as required) Some 2x4s (as required) Some inexpensive 1/8" or 1/4" plywood Exterior wood screws (deck screws) Exterior wood-sealing paint Some galvanized or brass hinges (may not be necessary if the hinges on the windows are still good) Some big, sturdy exterior-grade handles A tube of latex sealant A common heating vent (optional)

Point cloud Download Meshlab ( or use some other software to manage 3D point clouds. Import your *.asc file, simple by drag and drop method. Uncheck triangulation and hit OK. You will get see cloud points of scanned object! Success! How to Hack Microsoft Kinect Sensing Console of Xbox 360 Microsoft launched the Kinect motion sensing controller for the Xbox 360 last year, and it enroll itself into Guinness Book of World Records as the fastest selling consumer device of all time, selling over 10 million units in just two months. Kinect isn’t just a console accompaniment; it has the potential to unlock fun new ways of human machine interaction. While Nintendo and PlayStation Move require you to hold a wand or pointing device, Microsoft’s Kinect requires no such things, strongly emphasizing on its “you are the controller” in adverts.

ReadyMade Cool Copper Projects Warm metallic hues are easy to love but often pricey. When you create the look... 100+ Sites to Download All Sorts of Things These days you can find all sorts of things online, from audio books to flash files, from sound effects to CSS templates. Below we compiled a list with over 100 download sites that serve that purpose. We will also try to keep the list updated, so if your favorite download site is not here, let us know about it with a comment. Audio Books Librivox: One of the most popular audio libraries on the web.

The iPhone Inspired DIY Kitchen Touch Screen Project The Scope For years my wife has been on at me to put a computer into the kitchen where she can manage her recipes, shopping lists, to do lists and access the internet for looking up various things. After looking at a couple of pretty basic and well overpriced commercial units we decided to have a crack at doing this ourselves. Her requirements: - must be discrete and look like a digital picture frame when not being used.- must be touchscreen.- must have internet access.- must be easy to use and not crash often (she's used to windows vista) - must have barcode scanner for managing her kitchen database.- the wires and techo stuff must be hidden and out of sight.- should be able to view what's on the lounge TV in the kitchen. Touch Screen Monitor First thing on the list was to locate a reasonable priced touch screen monitor. The connections are very simple, 1 x 12vDC power feed, 1 x USB for driving the touch screen and a VGA and DVI sockets for connecting to a video feed.