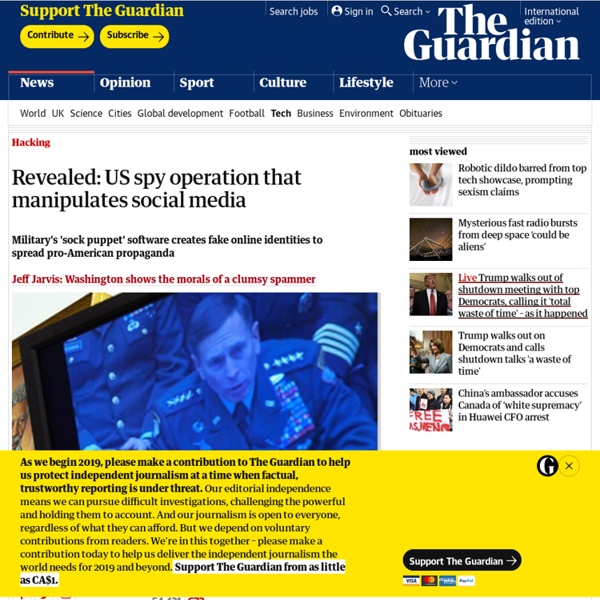 The US military is developing software that will let it secretly manipulate social media sites by using fake online personas to influence internet conversations and spread pro-American propaganda. A Californian corporation has been awarded a contract with United States Central Command (Centcom), which oversees US armed operations in the Middle East and Central Asia, to develop what is described as an "online persona management service" that will allow one US serviceman or woman to control up to 10 separate identities based all over the world. The project has been likened by web experts to China's attempts to control and restrict free speech on the internet. The discovery that the US military is developing false online personalities – known to users of social media as "sock puppets" – could also encourage other governments, private companies and non-government organisations to do the same. Nobody was available for comment at Ntrepid. … we have a small favour to ask. Related:  Covert • media • Politics

UFO DIGEST COM: UFO and Paranormal News From Around The World By William C. Treurniet Summary. Luminous orbs seen moving across the sky sometimes behave as if they are under intelligent control. This article discusses evidence that some orbs are made with covert technology which can create balls of glowing plasma in the atmosphere from a distance. The orbs appear also to be used as pixels for drawing three-dimensional objects in the sky. Introduction For many years, mysterious luminous spherical objects, or orbs, have been seen in the sky. The British Ministry of Defence (MoD) acknowledged in a summary report written in 2000, that unexplained luminous objects in the sky have occasionally been seen. It is not obvious how to create plasma balls remotely with the science and technology we have in the public domain. Some orbs are man-made plasma balls Recently, such evidence has come to light in several videos of the sky over Reading, England. Drawing with orbs A number of reports also mention luminous non-spherical shapes. Figure 1. Figure 2. Figure 3.

STATS: Migrants Committing Disproportionately High Crime In Germany, Media/Govt Focus on 'Far Right' Thought Crimes While much of this criminality concerned illegal border crossings, German authorities instead talked up a “record surge” in crimes by “right wing radicals”. Concerning statistics from the 135-page report reveal that 70 per cent of pickpocketing, one of the crime types on the rise, was committed by non-Germans. Of this figure, 34 per cent was committed by recent asylum seekers, with the rest committed by “non-Germans”. Foreign nationals are thought to account for around 11 or 12 per cent of the total population of Germany, but were over-represented in every area of crime. Illegal immigrants and asylum seekers account for around 2.5 per cent of Germany’s population, but were also massively overrepresented. Amongst total offences, non-Germans accounted for 27.6 percent while illegal immigrants and asylum seekers accounted for 5.7 percent. They accounted for 40.2 per cent of burglaries, 43.5 per cent of shoplifting, and a whopping 75.7 of pick pocketing or purse snatching.

British army creates team of Facebook warriors | UK news The British army is creating a special force of Facebook warriors, skilled in psychological operations and use of social media to engage in unconventional warfare in the information age. The 77th Brigade, to be based in Hermitage, near Newbury, in Berkshire, will be about 1,500-strong and formed of units drawn from across the army. It will formally come into being in April. The brigade will be responsible for what is described as non-lethal warfare. Both the Israeli and US army already engage heavily in psychological operations. Against a background of 24-hour news, smartphones and social media, such as Facebook and Twitter, the force will attempt to control the narrative. The 77th will include regulars and reservists and recruitment will begin in the spring. An army spokesman said: “77th Brigade is being created to draw together a host of existing and developing capabilities essential to meet the challenges of modern conflict and warfare. … we have a small favour to ask.

How Covert Agents Infiltrate the Internet to Manipulate, Deceive, and Destroy Reputations One of the many pressing stories that remains to be told from the Snowden archive is how western intelligence agencies are attempting to manipulate and control online discourse with extreme tactics of deception and reputation-destruction. It’s time to tell a chunk of that story, complete with the relevant documents. Over the last several weeks, I worked with NBC News to publish a series of articles about “dirty trick” tactics used by GCHQ’s previously secret unit, JTRIG (Joint Threat Research Intelligence Group). These were based on four classified GCHQ documents presented to the NSA and the other three partners in the English-speaking “Five Eyes” alliance. Today, we at the Intercept are publishing another new JTRIG document, in full, entitled “The Art of Deception: Training for Online Covert Operations.” Other tactics aimed at individuals are listed here, under the revealing title “discredit a target”: Then there are the tactics used to destroy companies the agency targets:

US military launches Operation Sock Puppet, pays contractor $2.76m for social media ops (UPDATED) From the Your Tax Dollars at Work file, news that the US military's Central Command (CENTCOM) has awarded a $2.7 million contract to Ntrepid, a newly-formed Los Angeles-based startup, to create fake online "personae" for the purpose of manipulating online conversations and spreading pro-American, pro-military propaganda in social media. The "online persona management service" called for in the contract would permit one US serviceman or woman to manage up to 10 separate sock puppets. The Guardian article today says the program would make it possible to "secretly manipulate social media sites such as Facebook and Twitter." CENTCOM disagrees with this characterization of the program, and their statement to Boing Boing is at the bottom of this post. Snip from Guardian: Read the whole article in the Guardian: "Revealed: US spy operation that manipulates social media" Learn to build robots (mad scientist's lab not included) Robotics: It’s a field that used to exist only as science fiction.

Technologies & History of Directed Energy Weapons - Organised Crime of Covert Electronic Assault, Stalking & Surveillance - New Zealand More on what these victims endure Read the short story below - About what victims endure Pages 1-7.Page 8 onward includes plenty of credible information with directions to the informative links page - to back/up the histories and usages of these tactics etc Re below... The True Story-The Bourne Identity(History Channel) A very informative documentary about the early days of experiments on controlling the human mind and creating assassination with no memory of their killing actions. Terrorism and Mental Health: The issue of psychological fragility(October 2009)Journal of Pakistan Medical AssociationByAmin Muhammad - Clinical professor of Psychiatry Of late, there are reports of a new and dreadful invention of weapons of violence that are called Bio-electromagnetic Weapons. See Amin Muhammad’s biography here Make up your own mind about HIDDEN Mind Altering Technologies in our communities. More on what these victims can endure here However, most of them avoided saying ... RFID Chip Procedure!

12 Fake News Stories from the Mainstream Media Walter Duranty and the Holodomor: The mother of all fake news stories must be New York Times reporter Walter Duranty helping Stalin’s Russia conceal the Holodomor from the world. Duranty helped the communists cover up one of the worst crimes against humanity ever perpetrated, the forced starvation of over 1.5 million people in Ukraine between 1932 and 1933. This was the worst of many lies Duranty told in the service of Soviet communism. The New York Times institutionally refuses to condemn Duranty or acknowledge the depths of his deception, portraying him as the victim of Stalin’s “powerful and omnipresent” propaganda machine – an excuse heard again from the mainstream media in other settings over the years, when they explain how they had to play ball with horrible dictatorships in order to gain access. Saturday Night Fever: Not many people realize that one of the most celebrated movies of the Seventies was based on a fake news story.

Hypocrisy of the west over fake news claim | Letters | Technology The defence secretary, Michael Fallon, appears ignorant of well-established UK and US military programmes designed to modify public perceptions in conflict zones (Nato must counter Russia’s ‘weaponising’ of lies – Fallon, 3 February). A prototype system was first reported in detail by Nick Fielding and Ian Cobain in the Guardian nearly six years ago – just as Nato began air attacks on Libya (Revealed: US spy operation that manipulates social media, 18 March 2011). I quote: “… it will allow the US military to create a false consensus in online conversations, crowd out unwelcome opinions and smother commentaries or reports that do not correspond with its own objectives … each fake online persona must have a convincing background, history and supporting details … up to 50 US-based controllers should be able to operate false identities from their workstations without fear of being discovered by sophisticated adversaries”. • Jimmy Wales argues (The internet gave us fake news.

Exclusive: Leftist Google Employees Conspire To Undermine Breitbart's Ad Revenue Previously, Google employees have contacted Breitbart News to reveal an atmosphere of indoctrination and intimidation, driven by leftist zealots at the company. Current and former employees at Google now tell us that those same zealots are trying to use the company’s immense power against Breitbart News. In addition to placing pressure on management to take action against the site, they are also working to undermine Breitbart’s reputation with advertisers. Breitbart News has obtained a screenshot (withheld to protect our source) that shows Google ad account manager Aidan Wilks advising another company – a client of Google’s – that advertising on Breitbart may impact their “brand safety.” In the screenshot, Wilks can be seen linking Google’s client to the website of Sleeping Giants, a far-left organization that has repeatedly targeted Breitbart and other conservative-leaning news sites with false claims of racism and bigotry. Open Letter The open letter accuses Breitbart of “hate speech”:

Operation Earnest Voice According to CENTCOM, the US-based Facebook and Twitter networks are not targeted by the program because US laws prohibit state agencies from spreading propaganda among US citizens as according to the Smith-Mundt Modernization Act of 2012.[6] However, according to the Smith-Mundt Modernization Act of 2012, dissemination of foreign propaganda to domestic audiences is expressly allowed over the internet including social media networks.[7] Isaac R. Porche, a researcher at the RAND corporation, claims it would not be easy to exclude US audiences when dealing with internet communications.[5] Details of the program[edit] The US government signed a $2.8 million contract with the Ntrepid web-security company to develop a specialized software, allowing agents of the government to post propaganda on "foreign-language websites".[2] Main characteristics of the software, as stated in the software development request, are: Statements[edit] See also[edit] References[edit] External links[edit]