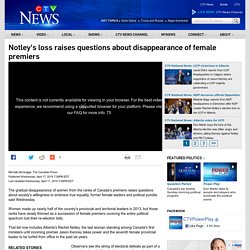 Women made up nearly half of the country's provincial and territorial leaders in 2013, but those ranks have slowly thinned as a succession of female premiers covering the entire political spectrum lost their re-election bids. Nobody Will Feel Good About Their Vote in 2019. Source images via The Canadian Press. 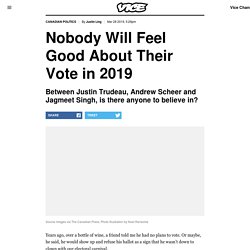 Photo Illustration by Noel Ransome Years ago, over a bottle of wine, a friend told me he had no plans to vote. Or maybe, he said, he would show up and refuse his ballot as a sign that he wasn’t down to clown with our electoral carnival. I’ll spare you the Sorkin-esque diatribe I launched into. I don’t know if I used the phrase “moral, personal, political, societal obligation” but, boy, it sure felt like I did. Homosexuality was not decriminalized in 1969: Anti-69 forum challenges “Just Society” myth - The Leveller. By Tom Hooper and Gary Kinsman he celebrations have already begun.

They say 2019 is the 50th anniversary of the 1969 decriminalization of homosexuality. The Royal Canadian Mint is set to reveal a commemorative $1 coin in April and Egale Canada Human Rights Trust, a national LGBTQ2 organization, was granted $770,000 from the federal government to produce a film celebrating this anniversary. The problem is that this is based on a myth. ‘It’s Vanier’s time’: Ottawa neighbourhood set for $50M renewal project. The owner of Bobby’s Table, a small family restaurant located on Montreal Road, always seems to be busy. 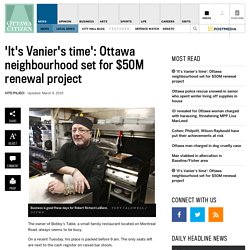 On a recent Tuesday, his place is packed before 9 am. The only seats left are next to the cash register on raised bar stools. The diner was born in 2009 from the ashes of the famed Nate’s Deli on Rideau Street, and has since become somewhat of a fixture in Vanier. It attracts customers from across the city and plays host to a group of regulars daily. When he moved in nine years ago, LeBlanc had hoped the restaurant would do well. “They closed. He said he has watched the corridor along Montreal Road change over the past decade. Victoria, Vancouver rank high for gender equality, but study says all Canadian cities need to improve. Canadian cities must do more to address gender inequality, researchers say in a new report looking at the gender gap in the country's 26 largest metro areas. 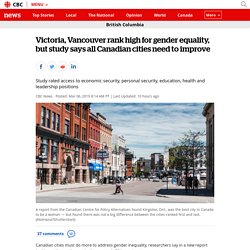 On Tuesday, the Canadian Centre for Policy Alternatives released its fifth annual study looking at which cities are the best and worst for women. It scored metro areas on access to economic security, personal security, education, health and leadership positions. This Man Bought a Far-Right Group’s Domain and Made a Furry Dating Site. Brady Grumpelt (left) and his furry creations (right). 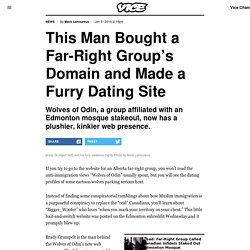 Photo by Mack Lamoureux If you try to go to the website for an Alberta far-right group, you won’t read the anti-immigration views “Wolves of Odin” usually spout, but you will see the dating profiles of some cartoon wolves packing serious heat. 1 in 5 Canadian youths not sure what happened in the Holocaust, survey suggests. One in five young people in Canada either hasn't heard of the Holocaust or isn't sure what it is. 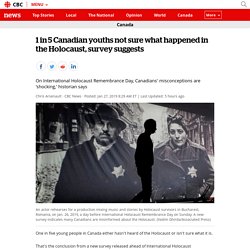 That's the conclusion from a new survey released ahead of International Holocaust Remembrance Day on Sunday. Historians believe the new data should be a wake-up call on how the systematic murder of six million Jews in Europe is taught in Canadian schools — and remembered more broadly. "One of the surprising things was the awareness gap between millennials and older respondents …it's shocking," said historian Naomi Azrieli, CEO of the Azrieli Foundation, the charity behind the survey. "I think older Canadians are more likely to have known a survivor or been around in World War Two," she told CBC News. "With each generation, it becomes less living history and more remote.

" Why incels are a 'real and present threat' for Canadians. This story contains graphic content. 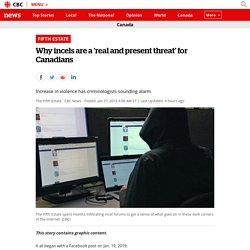 It all began with a Facebook post on Jan. 19, 2019. A Colorado man named Christopher Cleary took to social media and laid out the plan for an attack that was coming together in his mind. OC Transpo users forming one-voice alliance. About 80 people attended a workshop Saturday aimed at creating Ottawa Transit Riders, an advocacy group to push passenger interests and act as a watchdog over OC Transpo. 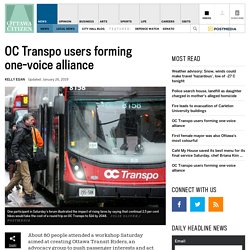 The event at the University of Ottawa was intended to funnel ambitions of several smaller volunteer organizations into one that would primarily deal with concerns of transit riders at a time of rising fares, declining ridership and the uncertain impacts of LRT. It will likely be modelled after a similar group in Toronto that charges an annual membership fee, has a board of directors, an active roster of volunteers and now one full-time staff member. Vincent Puhakka, one of the early members of Toronto’s TTCriders, said the group formed in 2009 had grown to a point where it was frequently in mainstream media coverage talking about transit issues in Canada’s largest city. “We are now part of the civic discussion.” There was a woman arguing for acceptance of all pets on all OC Transpo buses. The dark side of Canada's new food guide — many Canadians can't follow it. This is an excerpt from Second Opinion, a weekly roundup of eclectic and under-the-radar health and medical science news emailed to subscribers every Saturday morning. 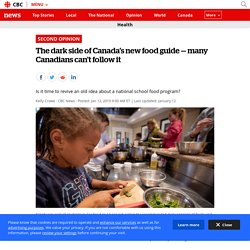 If you haven't subscribed yet, you can do that by clicking here. With headlines this week about changes coming soon to the Canada Food Guide one haunting fact remains — many Canadians don't have the time or the money to follow the national nutrition recommendations. Canadian charity used donations to fund projects linked to Israeli military. The Jewish National Fund of Canada, one of the country's long-established charities, has been the subject of a Canada Revenue Agency audit over a complaint that it used charitable donations to build infrastructure for the Israel Defence Forces (IDF), in violation of Canada's tax rules.

The JNF funds numerous projects in Israel, such as reforestation efforts in areas hit by wildfires and the construction of playgrounds for special needs children. However, it has also funded infrastructure projects on Israeli army, air and naval bases. Free-prescriptions-for-many-children-and-young-adults-in-ontario-set-to-end-in-march. Free taxpayer-funded prescriptions to children and young adults under 25 will end in March if they have private insurance coverage. The looming change in the OHIP+ pharmacare program, expected to save $250 million a year, was first announced in late June as Premier Doug Ford’s Progressive Conservatives took power but the time frame for implementation remained a mystery until now. “The government is fixing OHIP+ by focusing benefits on those who need them the most,” said a notice posted online on a government website this week putting the proposal out for public comment until the end of January.

Sources said the government hopes to have the necessary systems in place with insurers and pharmacies by late March. Under the new plan, children and young adults will continue to get free prescriptions if they or their parents do not have private health insurance coverage. At drug stores, pharmacists will ask customers if they have insurance and check their coverage online. Some parties matter. The Islamic Party of Ontario doesn't. Rogue tax workers snooping on Canadians in larger numbers. Workers at the Canada Revenue Agency continue to snoop on the confidential tax files of spouses, parents, friends, neighbours, colleagues, church members and businesses, despite a $10-million project meant to discourage them.

Ten months of internal reports obtained by CBC News show the files of at least 10,000 Canadians were compromised by the agency's employees, who used their privileged access to government databases to make unauthorized forays into taxpayers' private financial affairs. Your tax bill could change in 2019. Here's what to expect. A whole host of federal tax changes come into effect in the new year. International trade in 2019: getting worse before it gets better. No question, 2018 was a stunning and often frustrating year for everyone engaged in international trade. Now, 2019 seems to be looking at all that conflict and disruption and saying, "Hold my eggnog. " CBC News asked Canadian and American researchers, lecturers, lawyers and business advocates what they expect the new year to bring.

Here's some of what they told us. NAFTA 2.0 ratification: Will they or won't they? The trade agreement that's the most important for Canada's economy is still the one that brings the greatest uncertainty, said Meredith Lilly, the Simon Reisman chair at the Norman Paterson School of International Affairs. Canada Can't Put Proud Boys On Extremist List Because It Doesn't Have One. 731,000 Canadians Borrow Money To Cover Prescription Drug Costs: Study. OTTAWA — A gap in medication coverage forced an estimated 731,000 Canadians to borrow money to pay for out-of-pocket prescription drug costs last year, according to a new study published Tuesday. Tommy Douglas’s enthusiasm for eugenics being airbrushed by Canadians: MD. PressProgress. 'Deeply concerning': Canada pension fund invests in US immigration detention firms. Canadian politicians have expressed alarm that one of Canada’s biggest pension investment funds has increased holdings in two private US companies that run American prisons and incarcerate the majority of detained immigrants.

The Canada Pension Plan Investment Board (CPPIB), which manages $366.6bn in pension funds on behalf of some 20 million Canadian retirees, holds US$5.9m of stock in Geo Group and CoreCivic, according to its latest US Security and Exchange Commission filings. Ontario court ruling clears the way for intoxication to be used as a defence in sexual assault cases. Canada is using ancestry DNA websites to help it deport people - VICE News. Canadian police dismissing fewer sexual-assault cases. Police dismissed fewer sexual assault allegations as “unfounded” in 2017, after The Globe and Mail revealed that Canadian law enforcement disproportionately dismisses sexual offences as baseless compared with other crimes, new crime data from Statistics Canada show. At the same time, there was a 13-per-cent jump in the total number of “founded” sexual assaults reported to police – a shift partly explained by the fact that fewer cases were dismissed as invalid, unfounded complaints.

Rebecca Kong, the head of the policing services program at the Canadian Centre for Justice Statistics, noted that the broader societal reckoning around sexual violence and harassment likely played a significant role as well. Internal Server Error. Internal Server Error. St. Internal Server Error. Hundreds turned out in Ottawa Saturday to protest the detention of immigrant families in the United States who have been crossing the country's southern border — but also to bring attention to the fact Canada isn't blameless, either. Montreal Moving Day: what happens when a whole city moves house at once? Toronto, take a lesson from Montreal: Cities are for people.

Should Canada give up on NAFTA? Yes. Minister looks for signs of gender bias in federal science departments. Dear Andrea Horwath, now comes the hard part. Internal Server Error. The Life, Death, And Resurrection Of The Canadian Discount Department Store. When young men play the victim – and then take the lives of others. Dalhousie urged to let political speech 'flourish' amid Facebook post controversy - Nova Scotia.

Gender & feminisim. Environment. Indigenous. Immigration & oppression. $15 and Fairness. Wab Kinew making it official: set to announce run for leadership of beleaguered NDP - Manitoba. It’s time for Scotland to find a new home – in Canada. I'm An MP And I'm Among Those Who Struggle With Depression  The Case Against Elizabeth May As The Next NDP Leader - Loonie Politics. Farming issues getting heard on Hill, agricultural lobbying up 50 per cent from last year. Canadians Are Completely Nerding Out On The Long-Form Census - BuzzFeed News. Untitled. Canada Without Poverty charity challenges Harper govt. audits at UN in Geneva. Joshua Ostroff: How do You Like it Now, Boomers? You're to Blame for the Quebec Protests. Counter Arguments Against Motion M-312: "The Handmaid's Tale"