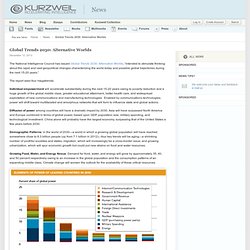 The report sees four megatrends: Individual empowerment will accelerate substantially during the next 15-20 years owing to poverty reduction and a huge growth of the global middle class, greater educational attainment, better health care, and widespread exploitation of new communications and manufacturing technologies. Enabled by communications technologies, power will shift toward multifaceted and amorphous networks that will form to influence state and global actions. Diffusion of power among countries will have a dramatic impact by 2030. Asia will have surpassed North America and Europe combined in terms of global power, based upon GDP, population size, military spending, and technological investment. Human Augmentation Game changers. Alternative Worlds.

The American Indian And The "Great Emancipator" By Michael Gaddy Published 01. 9. 03 at 21:31 Sierra Time Perhaps the veneer of lies and historical distortions that surround Abraham Lincoln are beginning to crack. 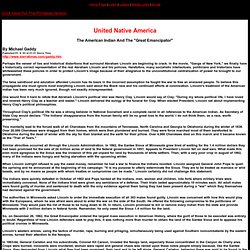 In the movie, "Gangs of New York," we finally have a historically correct representation of the real Abraham Lincoln and his policies. Heretofore, many socialistic intellectuals, politicians and historians have whitewashed these policies in order to protect Lincoln's image because of their allegiance to the unconstitutional centralization of power he brought to our government. The false sainthood and adulation afforded Lincoln has its basis in the incorrect assumption he fought the war to free an enslaved people.

To believe this propaganda one must ignore most everything Lincoln said about the Black race and his continued efforts at colonization. One would find it hard to refute that Abraham Lincoln's political idol was Henry Clay. Similar atrocities occurred all through the Lincoln Administration. Annin Flagmakers - The oldest and largest manufacturer of flags in the United States. Sorting out the truth in politics. The Class-Domination Theory of Power. By G. 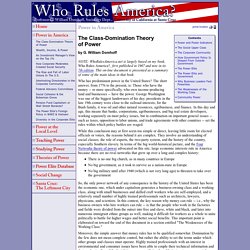 William Domhoff NOTE: WhoRulesAmerica.net is largely based on my book, Who Rules America? , first published in 1967 and now in its 7th edition. This on-line document is presented as a summary of some of the main ideas in that book. Who has predominant power in the United States? While this conclusion may at first seem too simple or direct, leaving little room for elected officials or voters, the reasons behind it are complex. There is no one big church, as in many countries in EuropeNo big government, as it took to survive as a nation-state in EuropeNo big military until after 1940 (which is not very long ago) to threaten to take over the government Moreover, the simple answer that money rules has to be qualified somewhat. Most of all, there is free speech and the right to vote. Still, the idea that a relatively fixed group of privileged people dominate the economy and government goes against the American grain and the founding principles of the country. GovTrack.us: Tracking the U.S. Congress.