The world's carbon footprint revealed: Graphic shows which countries are guilty of producing the most emissions - with the US and UK both in the top 15  A record 175 countries recently signed up to a historic agreement to limit global warming, and it stemmed from the fact not enough is being done to curb rising emissions. 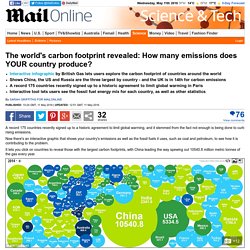 Now there's an interactive graphic that shows your country's emissions as well as the fossil fuels it uses, such as coal and petroleum, to see how it is contributing to the problem. It lets you click on countries to reveal those with the largest carbon footprints, with China leading the way spewing out 10540.8 million metric tonnes of the gas every year. A record 175 countries recently signed up to a historic agreement to limit global warming. No one ever says it, but in many ways global warming will be a good thing. Map shows half the planet's population lives on just 1% of its land. Land covers 196.9 million square miles of the planet, which is broken up into 196 countries that are home to 7.125 billion people. 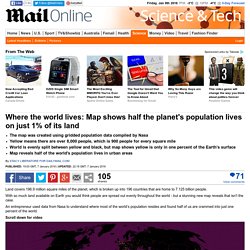 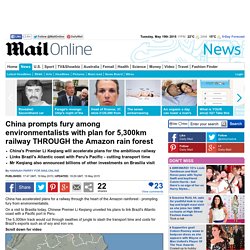 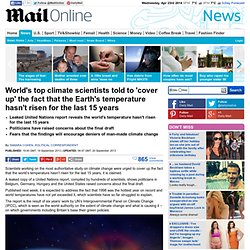 A leaked copy of a United Nations report, compiled by hundreds of scientists, shows politicians in Belgium, Germany, Hungary and the United States raised concerns about the final draft. Barry Rosenthal: “Found in Nature” makes artwork out of trash (PHOTOS). Barry Rosenthal Many people think of beach trash as an unfortunate eyesore. 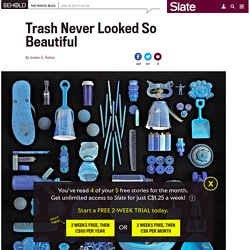 But Barry Rosenthal, who spends much of his time on beaches in gloves and knee-high boots, combing through glass, plastic, and other junk, finds artistic inspiration in what others leave behind. Rosenthal describes himself as a lifelong collector. As a child, he stocked up on baseball cards. And as an adult, he keeps collections of frying pans, clocks, and carnival horses, among others items. But his main interests as a photographer are plants and other natural subjects. War on Coal Is Being Won in U.S., but Real Battle Is Overseas. There’s a war on coal in America — or at least that’s what players in the coal industry say. 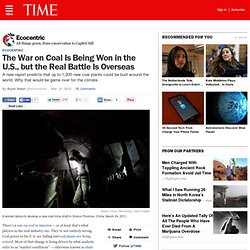 They’re not entirely wrong. Coal prices in the U.S. are falling and coal plants are being retired. Most of that change is being driven by what analysts refer to as “market conditions” — otherwise known as shale gas and fracking, which has driven prices for natural gas down, down, down. That’s encouraged utilities to phase out coal in favor of cleaner natural gas — a transition that has been accelerated by federal environmental regulations that will increasingly limit the sort of air pollution associated with old coal plants. It’s no surprise, then, that the coal industry pushed hard for Mitt Romney in the 2012 presidential election — or that coal bosses like Robert Murray, of Ohio-based Murray Energy, fired dozens of employees after the election as the industry went into survival mode. African girls’ pee-powered generator raises questions - FutureTech on NBCNews.

A new report from the Government Accountability Office says the U.S. 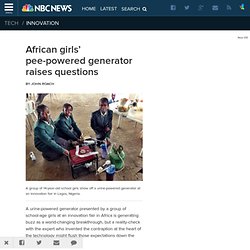 Air Force's remotely piloted aircraft program is understaffed, and the military branch isn't sufficiently supporting the officers who’ve signed up to fly the fleet of Predators and Reapers, which are used for reconnaissance and surveillance and sometimes for missile strikes. Today’s Air Force drone pilots are overworked and stressed. They guide the unmanned aircraft over places like Afghanistan from bases thousands of miles away in Nevada, New Mexico and California.

At the end of their long, pressure-filled shifts, when they drive home to their families, they may have missed a birthday or soccer practice. Some aren't sure when their deployment will end. “There’s been an explosion of the use of these particular vehicles,” said Brenda Farrell, the GAO's director of defense capabilities and management, who led the study. China refuses to recycle Britain's rubbish because it is of such poor quality. Dirty plastic dumped on landfills in the UK By Anna Edwards Published: 09:07 GMT, 12 November 2012 | Updated: 13:26 GMT, 16 November 2012 Britain's rubbish sent to China for recycling is being returned to UK landfills because the quality is so poor. 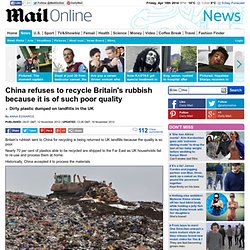 Nearly 70 per cent of plastics able to be recycled are shipped to the Far East as UK households fail to re-use and process them at home. Historically, China accepted it to process the materials. Councils resort to burning millions of tons of household rubbish as amount recycled by families stalls.