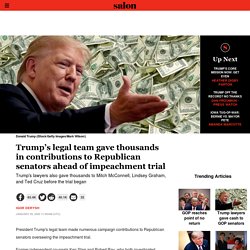 Former independent counsels Ken Starr and Robert Ray, who both investigated former President Bill Clinton ahead of his impeachment, contributed thousands of dollars to Senate Majority Leader Mitch McConnell last year before they joined the president's team, according to data from the Center for Responsive Politics (CFPR). Starr, who lamented that "we are living in … the age of impeachment" during the trial on Monday and accused Democrats of waging a "domestic war," gave $2,800 to McConnell in July 2019, according to CFPR.

Ray, who wanted to indict Clinton over the Monica Lewinsky affair but now claims Trump has been vindicated by the transcript of his July 25 phone call with Ukrainian President Volodymyr Zelensky, contributed the maximum $5,600 to McConnell in September 2019, according to the report. Starr also contributed $2,700 to Sen. Here's What A Map Of The US Looks Like If You Resize Each State By Population Density. Population density maps are always good fun. 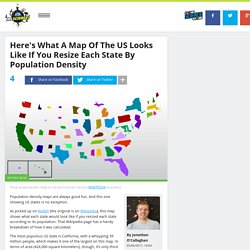 And this one showing US states is no exception. As picked up on Reddit (the original is on Wikipedia), this map shows what each state would look like if you resized each state according to its population. That Wikipedia page has a handy breakdown of how it was calculated. The most populous US state is California, with a whopping 39 million people, which makes it one of the largest on this map. In terms of area (424,000 square kilometers), though, it’s only third behind Texas (697,000 square kilometers) and Alaska (1.7 square kilometers).

Texas too does pretty good in the population density map (28 million people), as does Florida (21 million). But the biggest mover is no doubt Alaska. It’s just a bit of fun, sure, but it’s pretty interesting to look at. Trump on North Korea: “After listening for 10 minutes, I realized it’s not so easy” Top 3 Things You Need to Know About the CBO Score on the “Defund” Planned Parenthood Provision. The CBO confirms that the provision would result in patients losing access to health care. 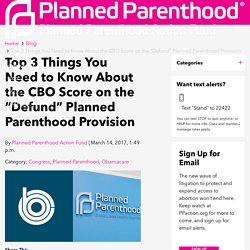 Yesterday, the Congressional Budget Office (CBO) released their score of the Affordable Care Act (ACA) repeal bill. The CBO score highlights several key points regarding the provision to “defund” Planned Parenthood — here are the top three points. The CBO score of the ACA repeal bill reaffirms what we already know: the provision to ‘defund’ Planned Parenthood would have disastrous consequences and result in women losing access to care, especially services that help women prevent unintended pregnancies. We’ve made tremendous gains in this country thanks to expanded access to reproductive health care and birth control: We are at a 30-year low in unintended pregnancies, and a historic low in teen pregnancies. Jill Stein Is a Rightwing Tool. Who uses Obamacare in WA? People from Trump country. As Congress looks at changes to the Affordable Care Act, the creators of Washington’s health insurance exchange are advocating for the state’s current system – with maps. 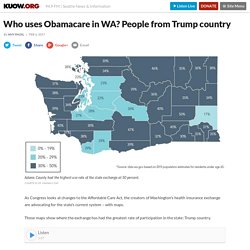 Those maps show where the exchange has had the greatest rate of participation in the state: Trump country. Supporters of the Affordable Care Act say some members of the public don’t realize the impact the legislation has already had. Now the Washington Health Benefit Exchange is trying to tell that story at a website called 1in4WA.com. Washington exchange communications director Michael Marchand said in the past five years the exchange has grown to serve 1.8 million people, a quarter of the state’s population. “In doing that, we’ve managed to lower our state’s uninsured rate by over 60 percent and now less than 6 percent of our state’s population is uninsured,” he said. Which Issues Each Party Debates, or Ignores. Meanwhile, in America… The New York Times public editor's very public utterance. 'Should the Times be a Truth Vigilante? 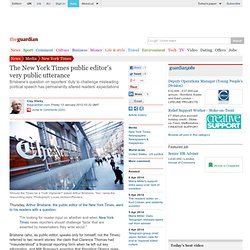 ' asked Arthur Brisbane. 'Yes,' came the resounding reply. Photograph: Lucas Jackson/Reuters Thursday, Arthur Brisbane, the public editor of the New York Times, went to his readers with a question: "I'm looking for reader input on whether and when New York Times news reporters should challenge 'facts' that are asserted by newsmakers they write about. " Brisbane (who, as public editor, speaks only for himself, not the Times) referred to two recent stories: the claim that Clarence Thomas had "misunderstood" a financial reporting form when he left out key information, and Mitt Romney's assertion that President Obama gives speeches "apologising" for America.

The reaction from readers was swift, voluminous, negative and incredulous. "Is this a joke? American Politics Unveiled. Behind the Arab Revolt Is a Word We Dare Not Speak. Shortly after the invasion of Iraq in 2003, I interviewed Ray McGovern, one of an elite group of CIA officers who prepared the President's daily intelligence brief. At that time, McGovern was at the apex of the "national security" monolith that is American power and had retired with presidential plaudits. On the eve of the invasion, he and 45 other senior officers of the CIA and other intelligence agencies wrote to Bush that the "drumbeat for war" was based not on intelligence, but lies. "It was 95 percent charade," McGovern told me. "How did they get away with it? " I asked. Education and the electorate. Purple America. I-want-you-to-disagree-and-fight-amongst-each-other.jpg (JPEG Image, 500x500 pixels)