Politics and Human Rights in China

Chinese Pollution & Environmental Problems. China in Africa. China: People in the News. China: Industry & Workers. Chinese Economy. China: Architecture & Construction. China v Japan: The Battle for the Senkaku Islands. 5 Things the Pentagon Isn't Telling Us About the Chinese Military - By Trefor Moss. Think of it like an iceberg: The top lies in plain sight, but a lot more hides beneath the surface. 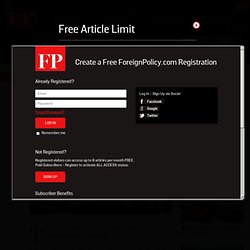 In its annual appraisal of the Chinese military published last week, the U.S. Department of Defense seems to be describing an object it finds both familiar and mysterious. The report certainly answers many of the important issues concerning China's military, including its attempts to develop an anti-ship ballistic missile and its continuing fixation on Taiwan. Xi Jinping: Can the pop star's husband brought up in a cave keep a lid on China's tinderbox? By Michael Burleigh Published: 02:09 GMT, 19 November 2012 | Updated: 16:52 GMT, 19 November 2012 Weighed down and shamed by the heavy placard hanging round his neck, the middle-aged man was paraded before a jeering crowd of thousands who had gathered in a sports stadium in Beijing. 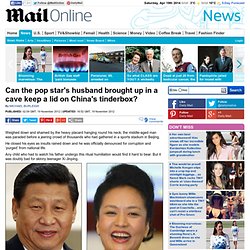 He closed his eyes as insults rained down and he was officially denounced for corruption and ‘purged’ from national life. Any child who had to watch his father undergo this ritual humiliation would find it hard to bear. But it was doubly bad for skinny teenager Xi Jinping. New dynasty: New Communist Party General Secretary Xi Jinping, left, will take charge of an increasingly divided country, but his wife singer Peng Llyuan, right, could add some pop star appeal to the leadership It is not clear what crime Xi Jinping’s father had committed, if any, but Xi Jinping was then taken into custody himself. ‘Even if you don’t understand why, you are forced to understand,’ he recalled bitterly. Crazy Things Happening In China. China lands fighter jet on its first aircraft carrier as it takes another leap towards becoming Asian naval power. China successfully landed a J-15 fighter jet on its Liaoning aircraft carrier while the ship was at seaLanding exercise marked the debut of the jet, a fighter bomber capable of carrying missiles and precision-guided bombs By Kerry Mcdermott Published: 18:00 GMT, 25 November 2012 | Updated: 08:10 GMT, 26 November 2012 China has taken a major step towards achieving its ambition of becoming a leading naval power after successfully landing a fighter jet on an aircraft carrier for the first time. 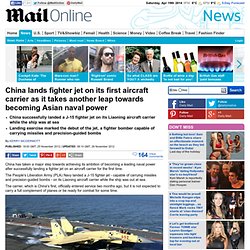 The People's Liberation Army (PLA) Navy landed a J-15 fighter jet - capable of carrying missiles and precision-guided bombs - on its Liaoning aircraft carrier while the ship was out at sea. The Chinese Holiday Inn which is 'being used as a black jail' to hold citizens who dare complain about life under Communism. Xie Jinghua and her husband were among five people who claim they were held against their will at the Holiday Inn Express in Nanhuizui, near ShanghaiThey were allegedly snatched on their way to complain after their homes were demolished to make way for Shanghai's Pudong International AirportTheir plan was to hand in a petition to the10-day annual meeting of China's legislature in MarchXie claims she was held for eight days under 24-hour guardWhen she tried to escape she was caught by seven guards and tied to bedIHG, who own Holiday Inn, says 'no indication' rooms were used as prisonsCampaigners say unofficial detentions in 'black jails' are rising in China By Matt Blake Published: 13:48 GMT, 14 November 2012 | Updated: 17:18 GMT, 14 November 2012 A Holiday Inn in China is being used as a 'black jail' for people who dare to complain about life under the Communist regime, it has been claimed. 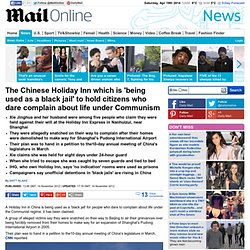 Black Jail? But Xie says she received no such classes. 'I really felt quite sick inside,' told CNN. Chinese Dissidence From Tiananmen to Today. On June 5, 1989, the day after the bloody crackdown on protesters in Tiananmen Square, Fang Lizhi, a prominent astrophysicist, and his wife, Li Shuxian, sought refuge in the U.S. embassy in Beijing. 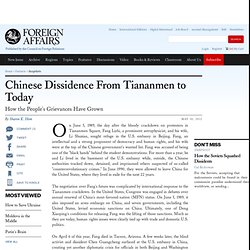 Fang, an intellectual and a strong proponent of democracy and human rights, and his wife were at the top of the Chinese government's wanted list. Fang was accused of being one of the "black hands" behind the student demonstrations. For more than a year, he and Li lived in the basement of the U.S. embassy while, outside, the Chinese authorities tracked down, detained, and imprisoned others suspected of so-called "counterrevolutionary crimes.

" In June 1990, they were allowed to leave China for the United States, where they lived in exile for the next 22 years. The negotiation over Fang's future was complicated by international response to the Tiananmen crackdown. It's not 'China bashing' if it's true! As the U.S. 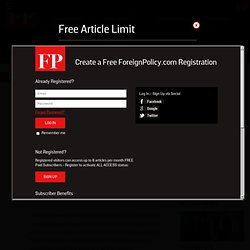 Presidential election campaign enters its final stages, both candidates are being criticized in the media for "bashing" China. This is in response to Obama administration filings of anti-subsidy complaints against China with the World Trade Organization (WTO) and to Governor Romney's strong criticism of Beijing's currency manipulation that undervalues its yuan (or RMB) as a way of subsidizing exports and acting as a tariff on imports. The best example is the Chicago Tribune. Bachelor Padding - By Roseann Lake. For more photos of Beijing's housing bubble, click here. 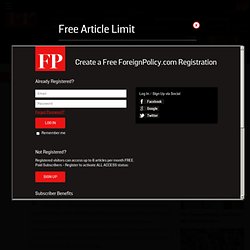 BEIJING — When Xiaobo Zhang got married in the early 1990s, he and his bride, like millions of other couples across China, were given a small room to live in by his danwei, or work unit. At the time a lecturer at Nankai University in Tianjin, Zhang's room was utilitarian and unremarkable, virtually indistinguishable from the ones inhabited by his colleagues. In a word: average. In the China of the 1990s, which was characterized by a pubescent limbo between the economic reforms of the 1980s and the last decade's explosive growth, Zhang recalls that mostly everyone was average. People were neatly packed into work units, generally laboring under the same conditions, eating in the same canteens, and sleeping in the same blocks of industrial-looking housing provided by their employers.

This is where the definition of "average" in China starts to go a little wonky. Millions of other Chinese men are not so lucky. China updates 600-year-old guide to respecting parents. A government official, meanwhile, held his nose and tasted his father's stool to check for symptoms of illness, while another woman used her breast milk to feed her toothless great grandmother. 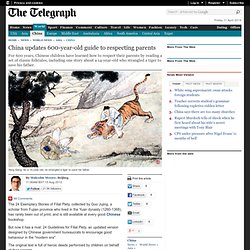 The modern version, however, is more prosaic. "Teach your mother and father how to use the internet," it offers. "Visit them as often as possible during the holidays"; "Listen carefully to their stories". Li Li, a spokesman for the My Heart With Old People project, a government-funded group which was behind the idea, said: "The new version reflects the spirit of the old text, but also reflects our new society. "We chose the bits of advice after speaking to the elderly over the past two years about what they wanted.

Filial piety remains the centre of China's moral compass, and has been incorporated into all of the country's major religions and belief systems. Guo's exemplary stories are known individually to most Chinese, and many other tales have been added over the years. 1. 2. 3. China's 'great revival' is 62 per cent finished. China arrests top security official on suspicion of spying for U.S. in 'greatest breach of state intelligence for two decades' By Daily Mail Reporter Published: 14:46 GMT, 1 June 2012 | Updated: 14:46 GMT, 1 June 2012 A top Chinese state security official has been arrested on suspicion of spying for the U.S., sources have claimed. 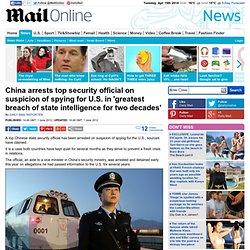 It is a case both countries have kept quiet for several months as they strive to prevent a fresh crisis in relations. The official, an aide to a vice minister in China's security ministry, was arrested and detained early this year on allegations he had passed information to the U.S. for several years. Detained: A top Chinese state security official has been arrested on suspicion of spying for the U.S., sources have claimed (file picture) 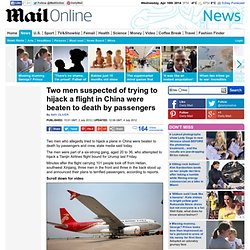 The men were part of a six-strong gang, aged 20 to 36, who attempted to hijack a Tianjin Airlines flight bound for Urumqi last Friday. Minutes after the flight carrying 101 people took off from Hetian, southwest Xinjiang, three men in the front and three in the back stood up and announced their plans to terrified passengers, according to reports. Scroll down for video.