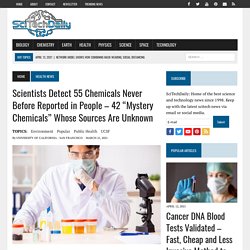 The chemicals most likely come from consumer products or other industrial sources. How three conspiracy theorists took 'Q' and sparked Qanon. In November 2017, a small-time YouTube video creator and two moderators of the 4chan website, one of the most extreme message boards on the internet, banded together and plucked out of obscurity an anonymous and cryptic post from the many conspiracy theories that populated the website's message board. Pro-Trump outlet misreads CDC report: Expert "disturbed" by scientific misrepresentation. For those who find that Fox News isn't right-leaning enough, One America News Network (OANN) has filled that gap. 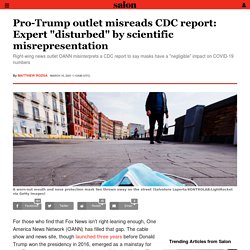 The cable show and news site, though launched three years before Donald Trump won the presidency in 2016, emerged as a mainstay for pro-Trump propaganda during the course of his presidency. The network notoriously amplified Trump's meritless claims that the 2020 election was stolen from him. Protests, Aerial Surveillance, and Police Defunding. For activists across the country who have taken to the streets to demand racial justice and police accountability, the sound of protest has been not just the sound of chants, but the sound of helicopters. 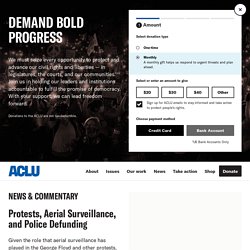 For many police departments, these protests have been an occasion to bring out all their high-tech toys, and those include surveillance aircraft, ranging from police helicopters to fixed-wing surveillance aircraft to drones. Like all expensive law enforcement practices, police aerial surveillance should be questioned and reevaluated as part of a broader divestment from police in the United States. That is doubly true considering the powerful new surveillance technologies that will increasingly be put into the skies above American cities and towns — if nothing is done to stop them. Last week, U.S. CBP’s Plan to Expand Face Surveillance at Airports is a Civil Liberties Disaster in the Making. Over the last couple years, it’s become increasingly clear that facial recognition technology doesn’t work well, and would be a civil liberties and privacy nightmare even if it did. 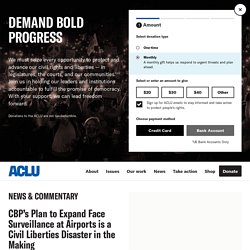 But that’s not stopping the Trump administration from moving forward with its dangerous plans to expand the technology’s use at U.S. airports and other ports of entry. U.S. Customs and Border Protection (CBP) has proposed a new rule that would massively expand the use of face surveillance at the border, further entrenching a dystopian surveillance infrastructure that threatens our rights to privacy and anonymity, and disproportionately harms people of color and immigrants. Today, we and a diverse group of rights organizations are calling on the government to withdraw its plans. According to a notice published in November, CBP plans to collect the faceprint of virtually every non-U.S. citizen who enters or exits the U.S., including children. 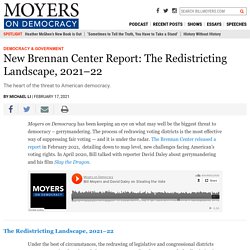 The process of redrawing voting districts is the most effective way of suppressing fair voting — and it is under the radar. The Brennan Center released a report in February 2021, detailing down to map level, new challenges facing American’s voting rights. In April 2020, Bill talked with reporter David Daley about gerrymandering and his film Slay the Dragon. Obama wanted to close Gitmo. Will Biden be able to finally do it? Michel Paradis: 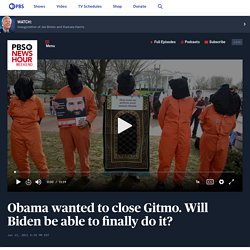 Russia: the spectre that loomed over Trump's presidency. When historians look back at Donald Trump’s presidency they are likely to pick out two defining themes. 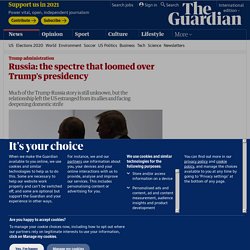 In a Republican party that had once regarded Vladimir Putin as a cold-eyed KGB killer, why was Trump’s behaviour towards Russia’s leader so ingratiating? There were Trump’s flattering public statements about Putin on the campaign trail. Donald Trump's 'Pussy' Presidency. Read: Donald Trump’s dangerous mask trap Trump modeled his aggressive caricature of maleness throughout his presidency, and throughout his adult life. 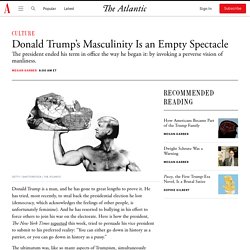 Sunday Pages: "Q-uiet Riot" - clareluxor - Gmail. ‘Stop the Steal’ Didn’t Start With Trump. Not that this was a shock. 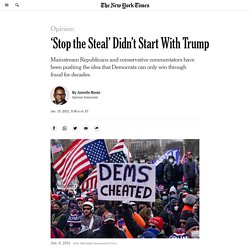 As an accusation, “voter fraud” has been used historically to disparage the participation of Black voters and immigrants — to cast their votes as illegitimate. And Obama came to office on the strength of historic turnout among Black Americans and other nonwhite groups. To the conservative grass roots, Obama’s very presence in the White House was, on its face, evidence that fraud had overtaken American elections. In 2011, Republicans in Alabama, Kansas, Mississippi, Pennsylvania, South Carolina, Tennessee, Texas, Virginia and Wisconsin capitalized on their legislative gains to pass new voter restrictions under the guise of election protection.

Other states slashed early voting and made it more difficult to run registration drives. The 2012 election saw more of the same accusations of voter fraud. US Capitol mob highlights 5 reasons not to underestimate far-right extremists. In the wake of the mob incursion that took over the U.S. 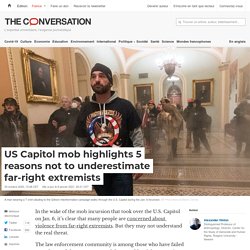 Capitol on Jan. 6, it’s clear that many people are concerned about violence from far-right extremists. But they may not understand the real threat. The law enforcement community is among those who have failed to understand the true nature and danger of far-right extremists. Over several decades, the FBI and other federal authorities have only intermittently paid attention to far-right extremists. US business leaders rue their ‘Faustian bargain’ with Trump. Trump's Wall With Mexico Follows in the Footsteps of Authoritarian Leaders Throughout History. Fox News’s post-Trump identity crisis, explained by an expert. As its main meal ticket prepares to leave office, Fox News is struggling through an identity crisis. For the better part of five years, Fox and Donald Trump have enjoyed a symbiotic relationship.

Bully, coward, victim? Inside the sinister world of Trump mentor Roy Cohn. Back in 2004, with the documentary Heir to an Execution, Ivy Meeropol began the decades-spanning project of exorcising the demon haunting her family. The Academy-shortlisted film sheds some light on the dark heritage of the Meeropol kids, descended as they are from Julius and Ethel Rosenberg, the couple executed by the United States government in 1953 having been convicted of sharing military secrets with the Soviet Union.

When not teaching as an economics professor, Ivy’s father Michael spent most of his adult life on a crusade to restore and advocate for the reputation of his late parents, after years of defamation from the sinister prosecutor in the case Roy Cohn. Ivy’s film-making brought some elusive semblance of closure to this process – until, that is, early November 2016. “That made me resistant to tackling his story, even though I was fascinated and compelled by him and I certainly had this unique perspective. Barr tries to criminalize protests. Trump AG Barr will escape impeachment thanks to 'corrupt' Republicans – Nadler. Attorney general William Barr “certainly deserves” to be impeached and removed but will escape that fate because Republicans who control the Senate are “corrupt against the interests of the country”, the chairman of the House judiciary committee said on Sunday.

The Shadow Network – BillMoyers.com. 'Downright dangerous': Democrats' alarm as Trump stacks Pentagon with loyalists. The data scientist exposing US white supremacists: 'This is how you fight Nazis' A field guide to Trump's dangerous rhetoric. All leaders are demagogues. How Gerrymandering Could Be Impacting Coronavirus Response In Wisconsin. Qanon conspiracy nonsense. At least 14 Republican candidates with links to QAnon have made their way into runoffs or onto the ballot this November. What is an antifascist. #SaveTheChildren, QAnon, and human trafficking: How Instagram and Facebook spread misinformation. Post Office documents reveal that Trump scrapped a plan to send masks to every home in April.

There was a plan in place to provide national testing. Trump had already announced the basics of that plan and the details were circulating around the White House. Asian giant hornets. What is Going on with Russia? – BillMoyers.com. US and Russian flags wave in the wind upon US Secretary of State Rex Tillerson's arrival in Moscow on April 11, 2017. (Photo by Gleb Schelkunov/Kommersant via Getty Images) July 13, 2020. Follow the Money: Covid-19 Data and Trump Campaign Edition – BillMoyers.com. (1) The secret tactics Monsanto used to protect Roundup, its star product. Climate Undermined by Lobbying. Oil and gas firms 'have had far worse climate impact than thought' If the U.S. draws down troops from around the world, private contractors could fill in the gaps.

Here are all the treaties and agreements Trump has abandoned. Amazon will pay $0 in taxes on $11,000,000,000 in profit for 2018. A Russian 'troll slayer' went undercover at a troll factory. Her son died. And then anti-vaxers attacked her. Christchurch shooting: 49 dead in terrorist attack at two mosques – live updates. Medical Device Makers Report Malfunctions And Patient Injuries In FDA Database Hidden From Public ViewKaiser Health News. ‘You Have to Pay With Your Body’: The Hidden Nightmare of Sexual Violence on the Border. UN says US force-feeding detained immigrants may violate torture convention  Tiananmen Square Massacre. Trapped in a hoax: survivors of conspiracy theories speak out. Shelter worker sentenced to 19 years in prison for sexually abusing migrant boys.