Women and girl ‘gang raped as punishment for eating beef’ Indian sisters sentenced to be raped then paraded naked through streets. Meenakshi Kumari, 23, and 15-year-old sister are from Baghpat near DelhiBrother ran away with higher caste woman now thought to be pregnantUnelected all-male village council has decreed sisters must be punished By Tim Macfarlan For Mailonline Published: 13:34 GMT, 28 August 2015 | Updated: 17:47 GMT, 28 August 2015 A pair of sisters, one of whom is only 15, are to be raped as punishment for their brother running away with a married woman in rural India. 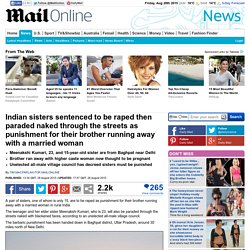 The teenager and her elder sister Meenakshi Kumari, who is 23, will also be paraded through the streets naked with blackened faces, according to an unelected all-male village council. The barbaric punishment has been handed down in Baghpat district, Uttar Pradesh, around 30 miles north of New Delhi. A pair of sisters aged 15 and 23 are to be raped and paraded through the streets naked with blackened faces as punishment for their brother running away with a married woman The Supreme Court building in New Delhi. India elections: BJP surpasses own expectations in Hindi heartland. By Piyush Srivastava Published: 22:16 GMT, 16 May 2014 | Updated: 22:16 GMT, 16 May 2014 Hindutva and the pitch for development together formed a magic formula which helped the BJP solve the complex arithmetic of caste-centric politics in Uttar Pradesh. 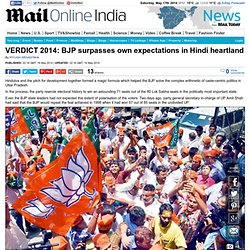 In the process, the party rewrote electoral history to win an astounding 71 seats out of the 80 Lok Sabha seats in the politically most important state. Even the BJP state leaders had not expected this extent of polarisation of the voters. Two days ago, party general secretary in-charge of UP Amit Shah had said that the BJP would repeat the feat achieved in 1998 when it had won 57 out of 85 seats in the undivided UP. India-elections. Who is Narendra Modi and why is the world afraid of him leading India? Narendra Modi, the chief minister of the Indian state of Gujarat, looks extremely likely to become India's next prime minister — his party, the BJP, has already won 280 of 545 seats, giving them an outright majority and a huge political victory — and the international community is terrified. 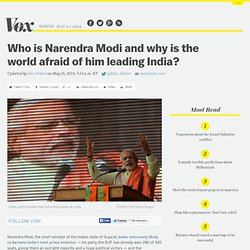 Though Modi is running as an economic fixer, or "India's CEO," The Economist went so far as to issue an anti-endorsement, urging Indians to vote for anyone but Modi. So who is Narendra Modi? And why is the world so worried? Who is Narendra Modi? Why did Modi keep his wife a secret for nearly 50 years? - Everything you need to know about Narendra Modi's rise. Gujarat is a state in northwest India of about 60 million people. 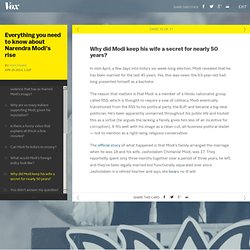 Modi became its political chief in 2001. The next year, one of the worst incidents of religious violence broke out. Accusations that Modi's rhetoric had stirred up religious tension, that his government allowed the killing, and that it may have even abetted the violence have hung over Modi ever since. The incident began when a group of Muslims set a train full of Hindus on fire, killing 59. In response, mass Hindu riots broke out against Muslim communities, killing an estimated 1,200 people, mostly Muslims, over three days of rapes and killings, often by immolation. This is not a fringe conspiracy theory: the US State Department denied Modi a visa to visit the US in 2005 over his suspected role in the incident. A few months after the riots, New York Times reporter Celia Dugger asked Modi if he wished he handled the riots any differently. Crazy Things That Only Happen In India. India Facebook arrest should act as a warning to all. India appears to be the latest nation taking liberties interpreting its own law books, after one woman was arrested for posting an inoffensive Facebook comment about Mumbai's financial sector being closed for an influential politician's funeral, and another simply for "liking" it. 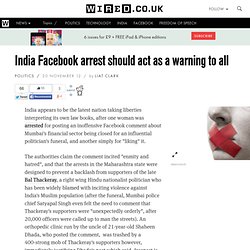 The authorities claim the comment incited "enmity and hatred", and that the arrests in the Maharashtra state were designed to prevent a backlash from supporters of the late Bal Thackeray, a right wing Hindu nationalist politician who has been widely blamed with inciting violence against India's Muslim population (after the funeral, Mumbai police chief Satyapal Singh even felt the need to comment that Thackeray's supporters were "unexpectedly orderly", after 20,000 officers were called up to man the streets).

Regardless of the reasons behind the arrest, it is still a troubling escalation of a trend we are seeing worldwide of authorities using information on social networks to prosecute or persecute. Sohanlal Chouhan 'drilled holes in wife's genitals so he could seal them with a PADLOCK when he went to work' Doctors in Indian state perform hundreds of hysterectomies on healthy women as part of national insurance scam. Doctors performed procedure on poor village womenCould claim up to £350 in return for treating familiesHealth Minister says women were deliberately being ill-advised by doctors By Andrew Levy Published: 21:01 GMT, 18 July 2012 | Updated: 21:01 GMT, 18 July 2012 Unscrupulous doctors have been profiting from a government scheme aimed at helping poor people by unnecessarily carrying out hysterectomies.

Doctors in the Indian state of Chhattisgarh performed the procedure which on poor village women without a valid medical reason in order to claim money from a national insurance scheme, the state's health minister said today. Under the programme launched in 2008, doctors are able to claim up to 30,000 rupees (£350) in return for treating poor families, providing a safety net to help pay for expensive hospital surgeries. But health minister Amar Agrawal, Chhattisgarh said the scheme had been exploited by doctors. A Failed Food System in India Prompts an Intense Review. Indian untouchable lynched by a village strongman for breaking strict caste rules by touching hand pump during heatwave.