Sanders. Recently on Facebook I saw a graphic flow by that caught my eye. 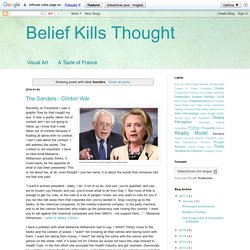 It was a quote, taken out of context and I am not going to follow up.I know that it was taken out of context because it floating all alone with no context. I don't care about the context. I will address the words. The context is not important. I have no idea what Marianne Williamson actually thinks, it could easily be the opposite of what is has been presented. "I want a woman president - really, I do. I have a problem with what Marianne Williamson had to say. This struggle between different segments of society has been going on for many thousands of generations and everyone has made substantial progress. 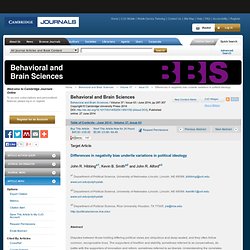 Hibbinga1, Kevin B. Smitha2 and John R. Alforda3. Map created by Joe Hammer The map shows the results of a 2013 (pre-Trump) WIN/Gallup International survey asking people which country they felt was the greatest threat to world peace. 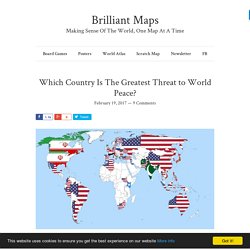 According to the survey results: The US was the overwhelming choice (24% of respondents) for the country that represents the greatest threat to peace in the world today. This was followed by Pakistan (8%), China (6%), North Korea, Israel and Iran (5%). Respondents in Russia (54%), China (49%) and Bosnia (49%) were the most fearful of the US as a threat. Interestingly, Iran was seen as the biggest threat by Americans, Canadians and Brits, but Australians viewed the US as the biggest threat.

France. Law. Violence. Health. International. The Flight 93 Election - American Greatness. Reposted with permission from the Claremont Review of Books. 2016 is the Flight 93 election: charge the cockpit or you die. 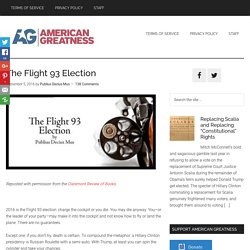 You may die anyway. You—or the leader of your party—may make it into the cockpit and not know how to fly or land the plane. There are no guarantees. Except one: if you don’t try, death is certain. To ordinary conservative ears, this sounds histrionic. Not to pick (too much) on Kesler, who is less unwarrantedly optimistic than most conservatives. But let us back up. Conservatives spend at least several hundred million dollars a year on think-tanks, magazines, conferences, fellowships, and such, complaining about this, that, the other, and everything. But it’s quite obvious that conservatives don’t believe any such thing, that they feel no such sense of urgency, of an immediate necessity to change course and avoid the cliff. Yet we may also reasonably ask: What explains the Pollyanna-ish declinism of so many others? 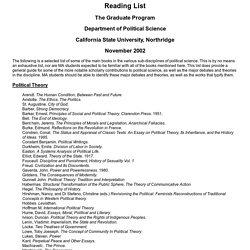 This is by no means an exhaustive list, nor are MA students expected to be familiar with all of the books mentioned here. Political Theory. Jonathan Haidt: The moral roots of liberals and conservatives. Political philosophy. Emergence. Noam Chomsky Breaks Down the Zombie Apocalypse. Last week Noam Chomsky participated in a question and answer session via Skype with a group of students. 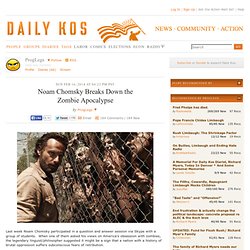 When one of them asked his views on America's obsession with zombies, the legendary linguist/philosopher suggested it might be a sign that a nation with a history of brutal oppression suffers subconscious fears of retribution. A sort of jerky-gaited, brain-eating, undead Karma. "This might sound kind of random, but I would really like to ask your opinion on why you think there's this preoccupation with the apocalypse and with zombies right now in our culture. " Chomsky responded that he felt the focus on zombies was "a reflection of fear and desperation" by "an unusually frightened country.

" The Paradox of Diverse Communities - Richard Florida. Urbanists and planners like to imagine and design for a world of diversity. 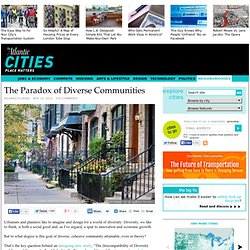 Diversity, we like to think, is both a social good and, as I’ve argued, a spur to innovation and economic growth. But to what degree is this goal of diverse, cohesive community attainable, even in theory? That’s the key question behind an intriguing new study, “The (In)compatibility of Diversity and Sense of Community,” published in the November edition of the American Journal of Community Psychology. The study, by sociologist Zachary Neal and psychologist Jennifer Watling Neal, both of Michigan State University (full disclosure: I was an external member of the former’s dissertation committee), develops a nifty agent-based computer model to test this question. Their simulations of more than 20 million virtual “neighborhoods” demonstrate a troubling paradox: that community and diversity may be fundamentally incompatible goals.