Peter Kropotkin. Murray Bookchin. Bookchin was an anti-capitalist and vocal advocate of the decentralisation of society along ecological and democratic lines. 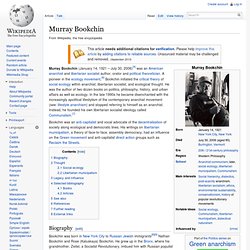 His writings on libertarian municipalism, a theory of face-to-face, assembly democracy, had an influence on the Green movement and anti-capitalist direct action groups such as Reclaim the Streets. Biography[edit] From 1947 he collaborated with a fellow lapsed Trotskyist, the German expatriate Josef Weber, in New York in the Movement for a Democracy of Content, a group of 20 or so post-Trotskyists who collectively edited the periodical Contemporary Issues – A Magazine for a Democracy of Content.

Contemporary Issues embraced utopianism. The periodical provided a forum for the belief that previous attempts to create utopia had foundered on the necessity of toil and drudgery; but now modern technology had obviated the need for human toil, a liberatory development. He continued to teach at the ISE until 2004. Joe Hill. In 1914, John G. 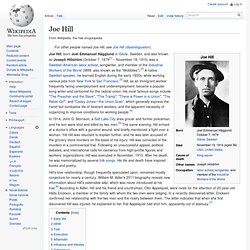 Morrison, a Salt Lake City area grocer and former policeman, and his son were shot and killed by two men.[5] The same evening, Hill arrived at a doctor's office with a gunshot wound, and briefly mentioned a fight over a woman. Yet Hill was reluctant to explain further, and he was later accused of the grocery store murders on the basis of his injury. Harry Braverman. Harry Braverman (December 9, 1920 – August 2, 1976)[1] was an American Marxist, political economist and revolutionary. 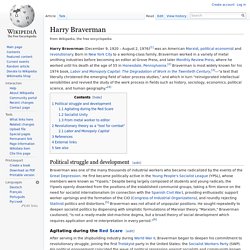 Born in New York City to a working-class family, Braverman worked in a variety of metal smithing industries before becoming an editor at Grove Press, and later Monthly Review Press, where he worked until his death at the age of 55 in Honesdale, Pennsylvania.[2] Braverman is most widely known for his 1974 book, Labor and Monopoly Capital: The Degradation of Work in the Twentieth Century,[3]—"a text that literally christened the emerging field of labor process studies," and which in turn "reinvigorated intellectual sensibilities and revived the study of the work process in fields such as history, sociology, economics, political science, and human geography. "[4] Political struggle and development[edit] Braverman was one of the many thousands of industrial workers who became radicalized by the events of the Great Depression.

Agitating during the Red Scare[edit] Stokely Carmichael. Murray Bookchin. Gene Sharp. Gene Sharp (born January 21, 1928) is the founder of the Albert Einstein Institution, a non-profit organisation dedicated to advancing the study of nonviolent action, and Professor Emeritus of political science at the University of Massachusetts Dartmouth.[3] He is known for his extensive writings on nonviolent struggle, which have influenced numerous anti-government resistance movements around the world. 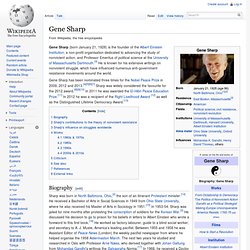 Gene Sharp has been nominated three times for the Nobel Peace Prize in 2009, 2012 and 2013.[4][5][6][7] Sharp was widely considered the favourite for the 2012 award.[8][9][10] In 2011 he was awarded the El-Hibri Peace Education Prize.[11] In 2012 he was a recipient of the Right Livelihood Award [12] as well as the Distinguished Lifetime Democracy Award.[13] Biography[edit] Sharp has been a professor of political science at the University of Massachusetts Dartmouth since 1972. Sharp's contributions to the theory of nonviolent resistance[edit] Sharp's influence on struggles worldwide[edit]

John Pilger. John Richard Pilger (born 9 October 1939)[1][2] is an Australian-British[3] journalist based in London.[4] Pilger has lived in the United Kingdom since 1962.[5][6] Since his early years as a war correspondent in Vietnam, Pilger has been a strong critic of American, Australian and British foreign policy, which he considers to be driven by an imperialist agenda. 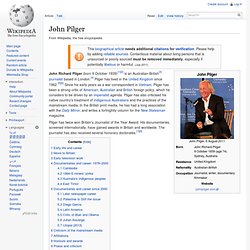 Pilger has also criticised his native country's treatment of indigenous Australians and the practices of the mainstream media. In the British print media, he has had a long association with the Daily Mirror, and writes a fortnightly column for the New Statesman magazine. Pilger has twice won Britain's Journalist of the Year Award. His documentaries, screened internationally, have gained awards in Britain and worldwide. The journalist has also received several honorary doctorates.[7][8] Louis Hartz. Mario Savio. Mario Savio (December 8, 1942 – November 6, 1996) was an American political activist and a key member in the Berkeley Free Speech Movement . 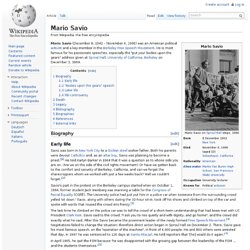 He is most famous for his passionate speeches, especially the "put your bodies upon the gears" address given at Sproul Hall , University of California, Berkeley on December 2, 1964. Ida B. Wells. Ida Bell Wells-Barnett (July 16, 1862 – March 25, 1931) was an African-American journalist, newspaper editor, suffragist, sociologist and, with her husband, newspaper owner Ferdinand L. 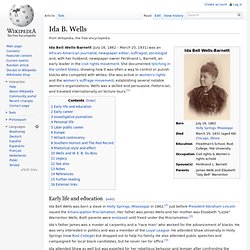 Barnett, an early leader in the civil rights movement. She documented lynching in the United States, showing how it was often a way to control or punish blacks who competed with whites. She was active in women's rights and the women's suffrage movement, establishing several notable women's organizations. Wells was a skilled and persuasive rhetorician, and traveled internationally on lecture tours.[1] Early life and education[edit] Ida Bell Wells was born a slave in Holly Springs, Mississippi in 1862,[2] just before President Abraham Lincoln issued the Emancipation Proclamation.

Ida's father James was a master at carpentry and a "race man" who worked for the advancement of blacks. Ida attended Shaw as well but was expelled for her rebellious behavior and temper after confronting the college president. Dr. Margaret Flowers: "It's Time for Medicare-for-All!" Mike Reynolds (architect) Michael Reynolds (1975) Michael E. 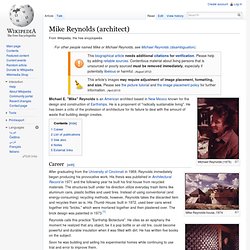 "Mike" Reynolds is an American architect based in New Mexico known for the design and construction of Earthships. He is a proponent of "radically sustainable living". He has been a critic of the profession of architecture for its failure to deal with the amount of waste that building design creates. Mike Reynolds house, 1974 Reynolds and beer can walls After graduating from the University of Cincinnati in 1969, Reynolds immediately began producing his provocative work.

Americans Who Tell The Truth. Imagine choosing pediatrics as a profession to “give children a great start, a healthy start…”, then leaving the profession because you weren´t allowed to give children the care they needed due to restrictions imposed by the health insurance industry. 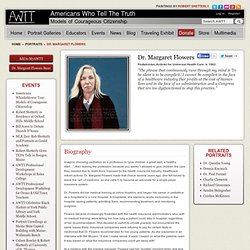 Healthcare reform activist, Dr. Margaret Flowers made that choice several years ago. She felt forced to leave the “art” of medicine, as she calls it, to become an advocate for a single-payer insurance system. Dr. Michael Parenti. Michael John Parenti (born 1933) is an American political scientist, historian, and cultural critic who writes on scholarly and popular subjects. 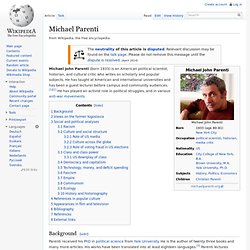 He has taught at American and international universities and has been a guest lecturer before campus and community audiences.[1][2] He has played an activist role in political struggles, and in various anti-war movements. Background[edit] Parenti received his PhD in political science from Yale University. He is the author of twenty three books and many more articles. His works have been translated into at least eighteen languages.[3] Parenti lectures frequently throughout the United States and abroad.

Michael Parenti was raised in an Italian-American working-class family and neighborhood in New York City about which he has written.[10] For many years Parenti taught political and social science at various institutions of higher learning. In 1974, Parenti ran in Vermont on the Liberty Union Party ticket for U.S. Kshama Sawant. Kshama Sawant is a Seattle City Council member.[2] A former software engineer from India, Sawant became a socialist activist and part-time economics professor in Seattle after immigrating to the United States.

She held part-time teaching positions at Seattle Central Community College and Seattle University[3] and was a visiting assistant professor at Washington and Lee University.[4] Sawant ran unsuccessfully for the Washington State House of Representatives before winning a seat on the Seattle City Council, making her the first socialist to win a city-wide election in Seattle since the radical progressive Anna Louise Strong was elected to the School Board in 1916.[2][5][6] Abbie Hoffman. Abbot Howard "Abbie" Hoffman (November 30, 1936 – April 12, 1989) was an American political and social activist who co-founded the Youth International Party ("Yippies"). Michael Parenti Political Archive.