Tim Berners-Lee's plan to save the internet: give us back control of our data. Releasing his creation for free 30 years ago, the inventor of the world wide web, Tim Berners-Lee, famously declared: “this is for everyone”. 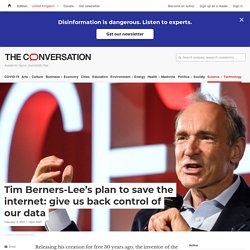 Today, his invention is used by billions – but it also hosts the authoritarian crackdowns of antidemocratic governments, and supports the infrastructure of the most wealthy and powerful companies on Earth. Now, in an effort to return the internet to the golden age that existed before its current incarnation as Web 2.0 – characterised by invasive data harvesting by governments and corporations – Berners-Lee has devised a plan to save his invention. This involves his brand of “data sovereignty” – which means giving users power over their data – and it means wrestling back control of the personal information we surrendered to big tech many years ago.

Courts in the US and the EU have filed cases against big tech as part of what’s been dubbed the “techlash” against their growing power. Net gains Building data vaults. America is a house divided against itself. A columnist must be careful what he confesses. 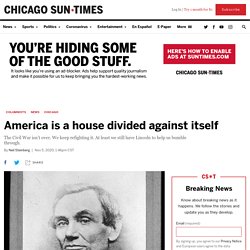 The idea is to echo common wisdom, not let slip some weird, damning personal detail. The Roots of Josh Hawley’s Rage. At the heart of Mr. 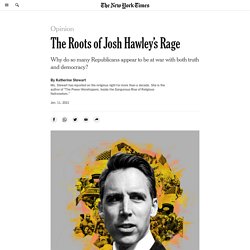 Parler CEO Says Service Dropped By “Every Vendor” Could End Business. Parler CEO John Matze said today that his social media company has been dropped by virtually all of its business alliances after Amazon, Apple and Google ended their agreements with the social media service. 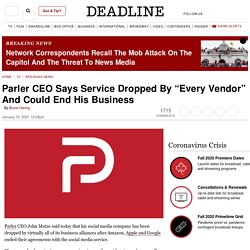 “Every vendor from text message services to email providers to our lawyers all ditched us too on the same day,” Matze said today on Fox News. Matze conceded that the bans could put the company out of business while raising free speech issues, calling it “an assault on everybody.” “They all work together to make sure at the same time we would lose access to not only our apps, but they’re actually shutting all of our servers off tonight, off the internet,” Matze said.

“They made an attempt to not only kill the app, but to actually destroy the entire company. George F. Will and the Limits of Erudition. Recently, I’ve been reading Max Boot’s The Corrosion of Conservatism: Why I Left the Right, yet another of those books from former Republicans explaining why they’ve left their former party, alienated by Donald Trump and the debasing of conservative philosophy. 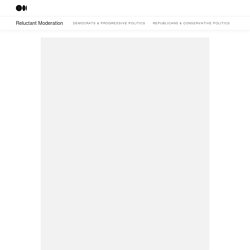 In his book, Max Boot mentions that, when he was coming of age, one of the conservatives he looked up to the most was George F. Will, whom he describes as “a bow-tied Tory delivering High Church judgments in crisp, complete sentences.” Anyone who has ever read one of Will’s columns in The Washington Post or read one of his books — his most recent work is The Conservative Sensibility — knows that this is a very accurate description, indeed. Will’s particular brand of conservative political commentary is something of an endangered species these days. SolarWinds: The more we learn, the worse it looks.

In March of 2020, Americans began to realize that the coronavirus was deadly and going to be a real problem. 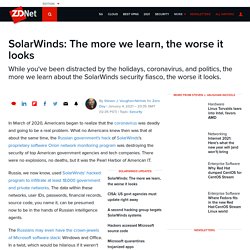 What no Americans knew then was that at about the same time, the Russian government's hack of SolarWinds's proprietary software Orion network monitoring program was destroying the security of top American government agencies and tech companies. There were no explosions, no deaths, but it was the Pearl Harbor of American IT. Russia, we now know, used SolarWinds' hacked program to infiltrate at least 18,000 government and private networks.

A Game Designer’s Analysis Of QAnon. Q is a fictional character I’m afraid this needs to be said. Q is not a real person, but a fictional character. 90 Days, 400 Years. The Multiple Organ Failure of the… Yes My Dear, All White People Are Racists. Economists Have Been Lying to Us for Decades. Economists Have Been Lying to Us for Decades. On Umair Haque. The Master of Catastrophe. Derrick Bell. Education and early career[edit] Soon afterwards, Bell took a position as an assistant counsel for the NAACP Legal Defense and Educational Fund (LDF), crafting legal strategies at the forefront of the battle to undo racist laws and segregation in schools. 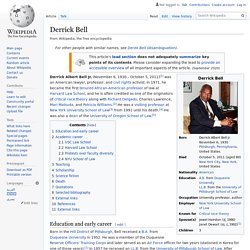 At the LDF, he worked alongside other prominent civil-rights attorneys such as Thurgood Marshall, Robert L. No, You Don’t Have the “Freedom” To Impose Your Religion On Me. Why Cancel Student Debt Is Trending On Twitter. Costco Karen and Other White Meltdowns Caught on Video. Medium. I Guess I’m the Intolerant Left But I Don’t Really Care Anymore. Douchebag: The White Racial Slur We’ve All Been Waiting For. The World Has Just Witnessed A “Pearl Harbor Moment” In Armenia.

As Climate Disasters Pile Up, a Radical Proposal Gains Traction. WASHINGTON — As the effects of climate change become more devastating, prominent research institutions and government agencies are focusing new money and attention on an idea once dismissed as science fiction: Artificially cooling the planet, in the hopes of buying humanity more time to cut greenhouse gas emissions. 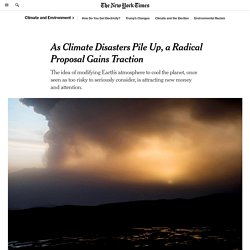 That strategy, called solar climate intervention or solar geoengineering, entails reflecting more of the sun’s energy back into space — abruptly reducing global temperatures in a way that mimics the effects of ash clouds spewed by volcanic eruptions. The idea has been derided as a dangerous and illusory fix, one that would encourage people to keep burning fossil fuels while exposing the planet to unexpected and potentially menacing side effects. On Wednesday, a nonprofit organization called SilverLining announced $3 million in research grants to Cornell University, the University of Washington, Rutgers University, the National Center for Atmospheric Research and others.

Questions From White People That Feel Racist. Racism Through the Eyes of a Rural White American. Biden's Polling Lead Over Trump Doesn't Ease My Fears. 4chan: The Skeleton Key to the Rise of Trump. An Open Letter to My New White Neighbor. How a mandate for impact in emerging markets helped the IFC outperform the S&P 500. Hidden in Plain Sight: Racism, White Supremacy, and Far-Right Militancy in Law Enforcement. In 1964, civil rights workers James Chaney, Andrew Goodman, and Michael Schwerner went missing in Mississippi during the Freedom Summer voter registration drive, shortly after being released from a Philadelphia, Mississippi, jail where they had been taken to pay a speeding fine. 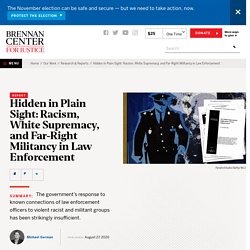 President Lyndon Johnson ordered FBI Director J. Edgar Hoover to send FBI agents to find them. Searchers found the bodies of eight black men, including two college students who were working on the voter registration drive, before an informant’s tip finally led the agents to an earthen dam where Chaney, Goodman, and Schwerner were buried. After local law enforcement refused to investigate the murders, the Justice Department charged 19 Ku Klux Klansmen with conspiring to violate Chaney, Goodman, and Schwerner’s civil rights. 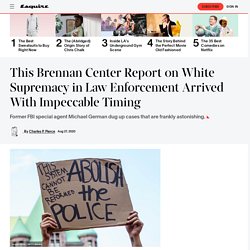 Against Economics. Money and Government: The Past and Future of Economics by Robert Skidelsky Yale University Press, 492 pp., $35.00 There is a growing feeling, among those who have the responsibility of managing large economies, that the discipline of economics is no longer fit for purpose. It is beginning to look like a science designed to solve problems that no longer exist. I Got My File From Clearview AI, and It Freaked Me Out. Have you ever had a moment of paranoia just before posting a photo of yourself (or your kid) on social media?

Maybe you felt a vague sense of unease about making the photo public. Or maybe the nebulous thought occurred to you: “What if someone used this for something?” 5 Phrases Your Black Friend Wishes You’d Stop Saying. Statistically speaking, about 75% of White people don’t even have a Black friend, but on the off chance that you are one of the White people who do, I have a message for you from your (one) Black friend: Do better. In her New York Times bestselling book White Fragility: Why It’s So Hard for White People to Talk About Racism, author Robin DiAngelo writes, “White progressives … so often — despite our conscious intentions — make life so difficult for people of color. I believe that white progressives cause the most daily damage to people of color.” I’m the Angry Brown Woman Who Called the Cops On My White Neighbor.

I felt shame when using my voice but I don’t regret what I did. My neighbor, an attractive white woman, moved in about a year ago with her two kids. Last night, I called the cops on her. I don’t trust the police as a rule; I’ve had innocent black and brown friends harassed and held at gunpoint. Explaining White Privilege to a Broke White Person. On Being White, Poor and Privileged. Nothing underlines my white privilege more than a trip to my local laundromat.