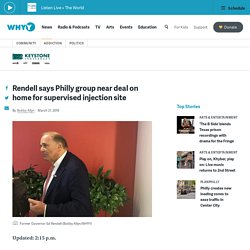 The Philadelphia nonprofit planning to open the country’s first site where opioid users can use drugs under medical supervision has been offered a building in the Kensington area for a lease of $1 a year. The offer was made by a prominent developer whose son recently died from an overdose, according to Ed Rendell, who is on the board of Safehouse, the group planning the so-called supervised injection facility. Rendell revealed the new details Thursday in Washington, D.C., at a conference on the subject of addiction and harm-reduction research organized by the Cato Institute, a libertarian think tank. 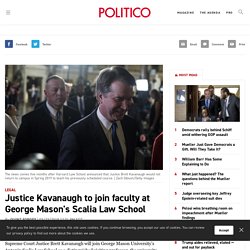 Kavanaugh will co-teach a two-credit summer course in England from July through August. The class, titled "Creation of the Constitution," focuses on "the origins and creation of the U.S. Constitution just outside of London in Runnymede, England, the location of the sealing of the Magna Carta," according to the Scalia Law School. Story Continued Below.

3/21: Trump says public should see Mueller's lame report. Trump said he was personally looking forward to reading the findings, even as he scorned the fact that Mueller was empowered to write the report in the first place. 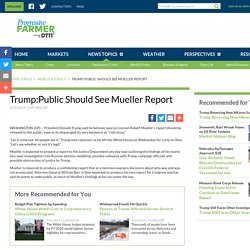 "I just won one of the greatest elections of all time in the history of this country. ... And now I have somebody writing a report that never got a vote? " Trump said.

3/21: EXCUTV ORDER: Colleges *must* keep doing what they do.

3/20: How the American Federation of Teachers Will Decide Which 2020 Democrat to Back. 3/19: 6 MI GOP disagree on renaming Lodge for the late Queen of Soul. 3/17: White Supremacy Hurts White People. 3/14/19: The Strongmen Strike Back. 3/13: The trolls are winning, says Russian troll hunter.

Slaying online trolls can be a lonely business. Just ask Russia’s Lyudmila Savchuk, who first exposed the story of Russia’s disinformation campaign back in 2014. The journalist and 33-year-old mother of two, Savchuk started noticing websites and social media accounts attacking local opposition activists in her hometown of Saint Petersburg with a frequency she hadn’t seen before. The posts were all too similar. The verbal assaults too coordinated. So, when Savchuk later heard that an organization rumored to be behind the campaign — the Internet Research Agency or IRA — was hiring writers, she went for it. “I wanted to get in there to see how it works, of course,” says Savchuk. Related: In Russia, a 'ghost empire' rises She was hired as a blogger and told to report to Savushkina 55, a nondescript four-story office building on the outskirts of town. 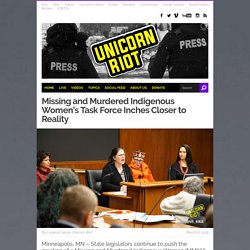 The House Bill HF 70 was approved by the Committee of Government Operations and is slated to go to the house floor as early as next week. 3/5: Lawmakers push for Medicaid managed care reform. SPRINGFIELD – Democratic state leaders said Tuesday that Illinois’ “managed care” Medicaid system is threatening the viability of hospitals and access to health care in many parts of the state, and they are pushing legislation they say would reform the system. 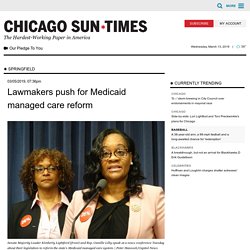 “We have a broken managed care program in Illinois, and it’s threatening the very future of our health care providers and the patients they serve all around this state,” Senate Majority Leader Kimberly Lightford said during a news conference unveiling the legislation. Under the managed care system, which Illinois launched in 2011, insurance companies are paid a flat, per-patient monthly fee to manage the care of most Medicaid recipients. These managed care organizations, or MCOs, are required to reimburse health care providers and make sure patients receive follow-up care with specialists, therapists or rehabilitation facilities following a medical procedure.

Lightford and Rep. 3/5: Some major Android apps still sending data directly to Facebook. Major Android mobile apps from companies including Yelp and Duolingo send data that could be used to personally identify you for ad tracking straight to Facebook immediately upon logging in, according to a new report from the London-based UK charity and watchdog group Privacy International (PI). This data transfer happens even if a user isn’t logged into Facebook on that device and even in the event the user doesn’t have an active Facebook account at all.

In addition to Yelp and Duolingo, PI found that two Muslim prayer apps, as well as a bible app and a job search app called Indeed, also sent similar data to Facebook that could be used to help identify users for ad targeting purposes when they browse the social network. The report builds on a similar investigation from PI last December that first revealed that big-name Android apps were sending data to Facebook without a user’s consent and without proper disclosure. 3/1: ICE must release 9 babies in TX detention facility, advocates say. Immigrant advocates are demanding the immediate release of at least nine infants under the age of 1, and their moms, from ICE custody in a South Texas detention facility lacking adequate medical care for this "vulnerable population. 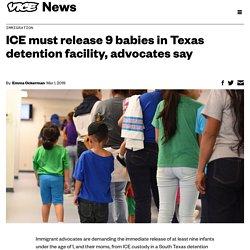 " In a letter sent to the Department of Homeland Security’s civil rights officer and inspector general Thursday, three immigration groups urged that the babies and their mothers should be released since ICE has “failed to demonstrate its ability to provide regular preventive care which could detect potentially serious complications that arise while in detention.” The South Texas Family Residential Center, in Dilley, Texas, (capacity: 2,400 detainees) is about an hour’s drive from a center that’s equipped to provide specialized medical services, the advocates said.

They started the letter saying they’ve seen an “alarming increase” in the number of infants being held in ICE custody. “U.S. Cover: In this Thursday, Aug. 9, 2018 photo provided by U.S. MAR 19: Conservatives React Differently to Disgusting Pictures. I. 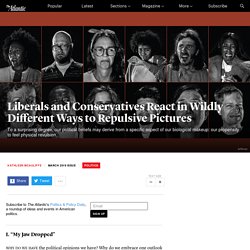 “My Jaw Dropped” Why do we have the political opinions we have? Why do we embrace one outlook toward the world and not another? How and why do our stances change? The answers to questions such as these are of course complex. To hear more feature stories, see our full list or get the Audm iPhone app. 25-year-old Kenyan invents gloves that convert sign language into audio speech - Pulse Kenya. More than 30 million people around the globe have speech impairments and must rely on sign language. 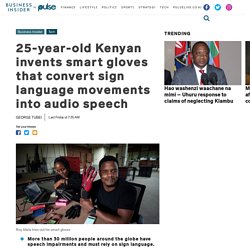