Ffi's political analysis - All the news not fit to print - Piero Scaru. Rise up against the tyranny of the safety Nazis: Persecuted people of Britain! You've had your lives ruined by petty, nonsensical 'safety' rules. Now a brilliant new book explodes the myths. Often 'health and safety' is abused by private and public organisationsNow ID is needed if someone buying Christmas crackers looks under 16Most reasons given for not using mobiles on airplanes are bogus By Michael Hanlon and Tracey Brown Published: 21:09 GMT, 14 June 2014 | Updated: 11:42 GMT, 15 June 2014 Summer 2009. 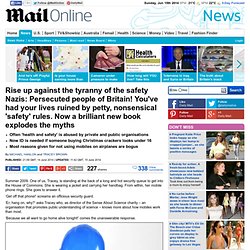 'We hear you’ is just pious codswallop. The Conservatives can play at this with the most confidence. 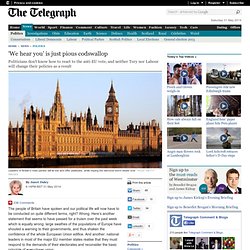 In our own modest way, we’re living in a Boko Haram world. It seems that over the weekend, the BBC forced a well-regarded 67-year-old DJ on Radio Devon to resign because he had been so careless as to play a 1932 recording of The Sun Has Got His Hat On. 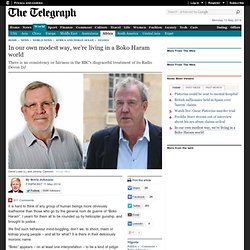 This contained a word that is now unmentionable. It is rude, offensive, and I would never use it; but this word has become so intensely haram that a miasma attaches to anyone using it, even inadvertently; and the prohibition is now enforced with a semi-religious fervour. When Jeremy Clarkson used it – or rather mumbled it, in an out-take never intended for broadcast – the drama went on for days. A clerisy of self-appointed internet witch-doctors went completely loco – or perhaps boko is the word. Benghazi nuts, anti-vaxxers, birthers: Do they really buy their own nonsense? Why do people believe ridiculous things, in despite of all reason and proofs to the contrary? 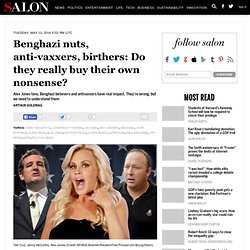 There are parents who allow their children to be vaccinated for whooping cough, diphtheria and tetanus, even though those diseases are much less harmful than their supposed cures. You sexist/racist/liberal/elitist bastard! How dare you? While he was dying of Lou Gehrig’s disease, Tony Judt found the breath to educate those who believe they could ameliorate pain with soft words and bans on ‘inappropriate’ language. 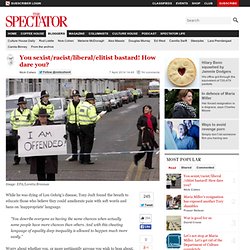 “You describe everyone as having the same chances when actually some people have more chances than others. And with this cheating language of equality deep inequality is allowed to happen much more easily.” Income segregation on the rise: Wealthy Americans with kids are isolating themselves, and poor families suffer. Since the suburban boom of the post–World War II era, parents of means have moved from cities to affluent areas with better schools. 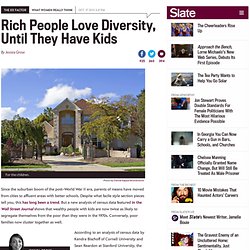 Despite what facile style section pieces tell you, this has long been a trend. But a new analysis of census data featured in the Wall Street Journal shows that wealthy people with kids are now twice as likely to segregate themselves from the poor than they were in the 1970s. Conversely, poor families now cluster together as well. According to an analysis of census data by Kendra Bischoff of Cornell University and Sean Reardon at Stanford University, the proportion of families living in affluent areas doubled from 1970 to 2009—it went from 7 to 15 percent. At the same time, the percentage of families living in poor areas also more than doubled—it went from 8-18 percent.

In Shutdown Washington, Women Are the Only Adults Left. This article appears in the October 28, 2013 issue of TIME under the title “The Last Politicians.” 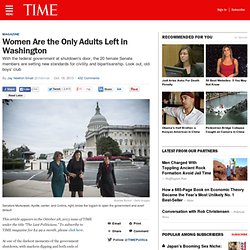 To subscribe to TIME magazine for $2.99 a month, please click here. Devils in Red Dress. The Book of Mormon: Why the world’s most capitalist religion breeds so many entrepreneurs. By Hamish McKenzie On July 31, 2013. 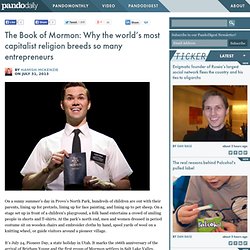 The Man at the Center of the Princess Diana Conspiracy. The anti-Kiev rebels are getting ready for battle by arresting “spies” and interrogating reporters while looking over their shoulders for support from Moscow. 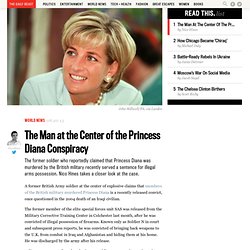 SLOVYANSK, Ukraine—When he threw his head back, shaking it in disbelief that such a question could be asked, the real menace of the former Soviet military officer came through. One of his gold teeth glinted in the light as he sneered. Ross Andersen – Humanity's deep future. Sometimes, when you dig into the Earth, past its surface and into the crustal layers, omens appear. 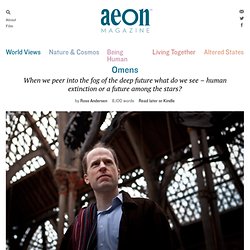 In 1676, Oxford professor Robert Plot was putting the final touches on his masterwork, The Natural History of Oxfordshire, when he received a strange gift from a friend. "Still, God Helps You" The extraordinary story of William Mawwin, sold into slavery at the age of 6. It is Monday morning in Phoenix, Arizona, and 33-year-old William Mawwin is getting dressed for school. His right arm is an old prosthetic the color of Hershey’s syrup. The prosthetic has begun to hurt him, but he cannot afford a new one. On his left hand, four fingers are missing down to the second knuckle. His naked back and chest are welted with raised, pinkish scars, some from beatings, others from burns. More scars, from knife wounds and skin grafts, map his body. The Inside Story of Russia's Fight to Keep the U.N. Corrupt - By Colum Lynch. When U.N. Secretary-General Ban Ki-moon and Russian President Vladimir Putin met in Sochi, Russia, they were supposed to discuss the civil war in Syria.

But the Russian leader -- joined by his top diplomat, Sergei Lavrov, and defense secretary, Sergei Shoigu -- suddenly changed the subject to more mundane matters. A series of U.N. reforms aimed at streamlining billions of dollars of spending on U.N. peacekeeping was posing a threat to Russia's commercial interests. Putin and his national security team politely but firmly pressed the U.N. leader to back off, according to several senior U.N. -based sources briefed on the meeting. The high-level intervention on U.N. spending marked only the latest example of Russia flexing its diplomatic muscle to protect its commercial position at the United Nations. The mad fuss over Reginald D Hunter's stand-up routine shows how divorced from reality the PC lobby has become. Memo to Iran’s apologists: President Ahmadinejad has denied the Holocaust. Has President Ahmadinejad ever denied the Holocaust?

I Am Not This Body. Anxiety: We worry. A gallery of contributors count the ways. We live not alone but chained to a creature of a different kingdom: our body. — Marcel Proust Every time I look at my face in a magnified mirror in a hotel bathroom, I jump back in surprise. Seen closely, my skin looks like the surface of a strange planet. Margaret Heffernan: An Epidemic of Wilful Blindness: Savile, Armstrong, LIBOR, HSBC... Eric Hobsbawm: He hated Britain and excused Stalin's genocide. But was he a traitor too? The west's hypocrisy over Pussy Riot is breathtaking. Mail Online - Euroseptic: Mary Ellen Synon in Brussels. What was punishment in the Bible is reality in Britain. The crumbling Coalition is being torn apart by the post-Budget Public Spending Review.