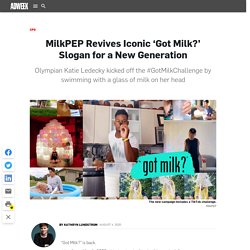 Is back. After launching in 1993 with the classic, Goodby Silverstein & Partners-created and Michael Bay-directed “Aaron Burr” spot for the California Milk Processor Board, the tagline was later adopted by the national milk processors’ organization, MilkPEP. But in 2014, MilkPEP decided to head in a new direction, leaving “Got Milk?” Behind. (Its California counterpart, however, still used the slogan.) Now, after a surge in milk sales amid the coronavirus pandemic, the slogan has been resurrected for a new generation of consumers. “The answer to the question of ‘Got Milk?’

The campaign includes a TikTok challenge that MilkPEP launched in partnership with Olympic champion Katie Ledecky, who swims the length of an Olympic pool with a glass of chocolate milk balancing on her head. It’s hard to pinpoint exactly why people are gravitating toward dairy milk during the pandemic, especially a growing trend toward plant-based alternatives to the dairy beverage. Volume 90% Seek Forward→ Snap Inc. Wants Businesses to ‘Meet the Snapchat Generation’ “Meet the Snapchat Generation,” Snap Inc.’s first-ever global business-to-business marketing campaign, is going live Monday across print, broadcast and digital media channels in the U.S., Canada and Australia. 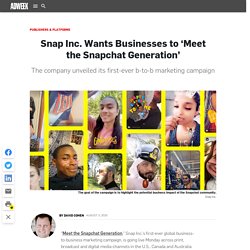 The campaign will be expanded to the U.K. on Aug. 17 and to the rest of Europe, as well as the Middle East and North Africa, on Aug. 24. Snap’s first global consumer campaign, “Real Friends,” kicked off last July highlighting the power or friendship and the platform’s communication tools. The new campaign was developed in-house by the company’s global business marketing and internal creative teams, along with external creative agency SpecialGuest. “Our first marketer-focused campaign showcases what is so special about our community, from their strongly held values to their unique behaviors,” Snap Inc. chief marketing officer Kenny Mitchell said in a statement. Is It a Video Game, or Is It New Zealand? This Fun Tourism Project Gamifies the Country. It’s not easy to get away overseas on vacation at the moment, thanks to the coronavirus pandemic. 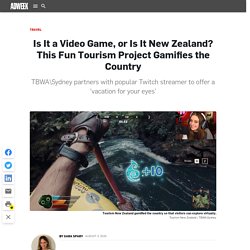 So Tourism New Zealand, with the help of TBWA\Sydney, found a way to open up the stunning country to virtual visitors. The tourism group and its agency partnered with Twitch and gaming influencer Loserfruit to gamify the country so that people can explore some of New Zealand’s greatest attractions. Primarily targeted at neighboring Australians and the gaming community, the campaign aims to present the country as the ultimate travel destination. 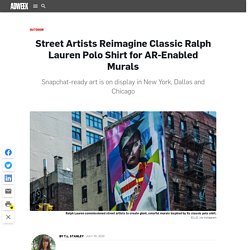 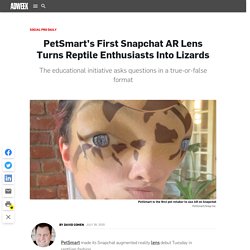 Snap Inc. said PetSmart is the first pet retailer to use AR on Snapchat, and its lens has an educational bent. Snapchatters answer questions about reptiles in a true-or-false test format, and correct answers cause their faces to morph into reptiles. PetSmart Snapchat Reptile AR Lens Volume 90% Press shift question mark to access a list of keyboard shortcuts Play/PauseSPACE Increase Volume↑ Decrease Volume↓ Canon Created a Site for Photojournalists to Tell the Real Stories Behind Their Viral Images. It’s a well known adage that an image has the power to speak 1,000 words. 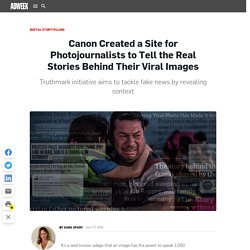 But in today’s age of fake news and trolling it also has the power to be taken out of context and manipulated for ill gain to forward an agenda. Just last week, as Adweek reported, a Trump ad on Facebook about the “chaos” of recent U.S. protests misleadingly used a 2014 image from the Ukrainian Revolution. Agency Uncle Grey Copenhagen in Denmark has created a new tool for camera brand Canon that aims to help avoid that type of image being taken out of context. In a bid to help press photographers protect and tell the real stories behind their most powerful images, the agency and Canon have developed a publicly searchable global database, called Truthmark, which allows photographers and photojournalists to upload their photos along with the real stories behind how and why the images were taken. Anyone who wants to check the authenticity of an image can search for it by uploading an image to the platform. Snapchat Launches New Shoppable AR 'Try-On' Campaign with Gucci Shoes.

Snapchat has launched the first campaign using its new 'Shoppable AR' technology, which it recently announced at its 2020 Snap Partner Summit. 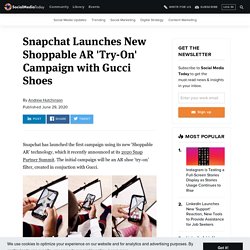 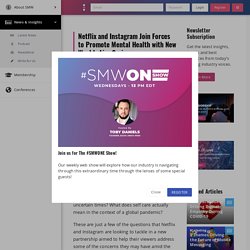 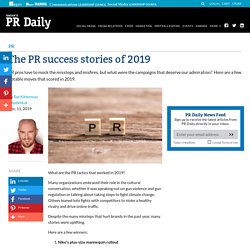 Many organizations embraced their role in the cultural conversation, whether it was speaking out on gun violence and gun regulation or talking about taking steps to fight climate change. How PayPal finds employee advocates to tell authentic stories. User Generated Content Campaigns: Best Examples From 2018 (So Far..) User generated content (UGC) campaigns are more prevalent, bigger and bolder than ever before in 2018. 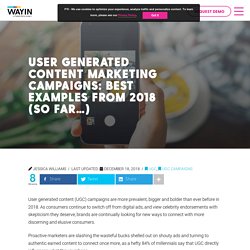 As consumers continue to switch off from digital ads, and view celebrity endorsements with skepticism they deserve, brands are continually looking for new ways to connect with more discerning and elusive consumers. Proactive marketers are slashing the wasteful bucks shelled out on shouty ads and turning to authentic earned content to connect once more, as a hefty 84% of millennials say that UGC directly influences what they purchase. Leading brands, such as National Geographic, Starbucks and Ripley’s are incorporating UGC into product pages, Social Stories and large interactive digital screens to increase sales, drive first-party data collection and boost advocacy. 4 Experiential Marketing Campaigns to Inspire Your Brand's Strategy. Ninety-five percent of marketers believe that live events give the opportunity to form an in-person connection and by 2020 it’s projected that the customer experience will overtake price and product as key brand differentiators.

In the spirit of these stats and as a guide to inspire your experiential marketing efforts, let’s take a look at four examples of brands who are leading in the space: 30 brands with excellent social media strategies – Econsultancy. Okay, it’s probably disingenuous to pretend that social media is still something nascent and unproven for brands. Even with a tricky attribution problem to solve, most brand marketers and advertisers agree it just makes sense to target these large, active and known audiences. Having said that, some brands ‘got’ social media a lot quicker than others. Here are 30 examples… 1. Blog — BrandBa.se. Source: References Adams, L., Burkholder, E. & Hamilton, K. (2015). Micro-Moments: Your Guide to Winning the Shift to Mobile, Google, Available Online: [Accessed 27 November 2016].

7 Things We Learned From Nat Geo, the No. 1 Brand on Social at SMWLA. Chipotle’s Instagram Story Featuring 100 Pictures of Queso Generated a 70% Completion Rate – Adweek. Buoyed by the Success of the Dancing Hot Dog, Snapchat Is Opening Up 3-D AR Ads for the Real World – Adweek. Ikea Just Made a 25-Minute ASMR Video, and It’s One of the Most Satisfying Ads Ever – Adweek. This Agency Proved You Don’t Have to Be a Spanish-Language Shop to Work Across Cultural Lines – Adweek. Client Stories. The 10 Best Social Media Marketing Campaigns of 2016 So Far. Marketers dream of creating and implementing the greatest buzz-building marketing campaign on social media, and the first half of 2016 has revealed no shortage of companies striving towards this ambitious goal with both traditional and new tactics to get people talking about their brands on social media. Digital marketing industry case study library - social media case studies.