The Legend Of Rahi. Surprising Cultural Differences in Schools Around the World. School children around the globe gather in classrooms to learn. 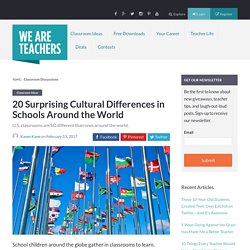 Though there are many similarities in how schools function and in their basic purpose, there are also many differences in the details of what a typical school day is like from one culture to the next. As our world becomes more interconnected, it is helpful to look carefully at our differences so we can better understand each other. Here, we have collected some surprising ways in which the customs and routines in schools around the world are different from U.S. schools. Consider sharing these intercultural facts with your students to help them become more culturally aware, curious, open minded, respectful, and tolerant of others. 1. From floating classrooms in Brazil to makeshift spots in Pakistani parks, the spaces where teaching and learning occur can differ greatly depending on where you live. 2.

Have you ever chased a ball of cheese down a hill (England) or played a game similar to football on ice (Russia)? 3. 4. 5. 6. Ki o Rahi - Push Play TV.mpg. Ki o Rahi - How to Play. Football modified games 09 aw. Gaelic Football - The Original Beautiful Game. The Rules of Gaelic Football - EXPLAINED! Handball QR code Google Docs. Building A Team Handball Unit. This post was originally sent out as an edition of The #PhysEd Newsletter. 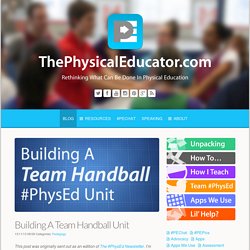 I’m posting it here, with a few extra thoughts, for those who weren’t subscribed to the newsletter when I sent this out. If you like this post, feel free to subscribe to the newsletter to make sure not to miss out in the future! Last spring, I took my grade 5-6 students to an interscholastic Team Handball tournament. The tournament was full of great plays, great teachable moments, and great fun. The lead up to the event was actually perfect because the curriculum outcomes I had already planned on introducing at that time of the year could be taught through Team Handball (you can learn more about how I mapped out this year's curriculum by checking out my Purposeful #PhysEd blog posts) The Team Handball unit went great, and my students demonstrated a great amount of learning both throughout the unit and at the tournament. 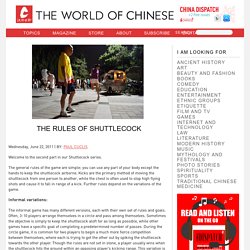 The general rules of the game are simple; you can use any part of your body except the hands to keep the shuttlecock airborne. Kicks are the primary method of moving the shuttlecock from one person to another, while the chest is often used to stop high flying shots and cause it to fall in range of a kick. Further rules depend on the variations of the game. Informal variations: The informal game has many different versions, each with their own set of rules and goals. Formal variation: The formal sport of shuttlecock has a court similar to badminton. The scoring system of the formal game is based on winning sets. Now, perfect your art, by learning the three main kicks of Shuttlecock. 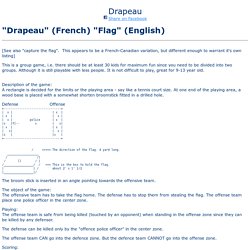 This appears to be a French-Canadian variation, but different enough to warrant it's own listing] This is a group game, i.e. there should be at least 30 kids for maximum fun since you need to be divided into two groups. Although it is still playable with less people. It is not difficult to play, great for 9-13 year old. Description of the game: A rectangle is decided for the limits or the playing area - say like a tennis court size.

Fun With Chinese Shuttlecock Kicking - How to Make a Feather Shuttlecock Toy. How to Make Your Own Shuttlecock With Feathers In the olden days, the Chinese make their own free shuttlecock toys by wrapping a coin with a piece of cloth, tied up a bunch of chicken feathers and then inserted them into the hole of the coin! 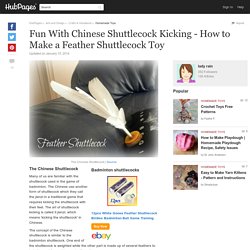 You, too, can make your own shuttlecock toy with the following materials: Craft feathers, chicken or bird feathersChinese coinCardboard, plastic sheet from an old folder or thick paperStrong bonding glue Draw about 20 circles on the cardboard and plastic sheet. The circles should be a little bigger than the Chinese coin. Set aside the first disc.