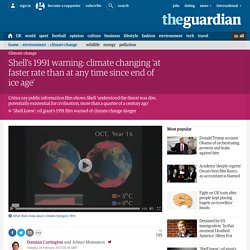 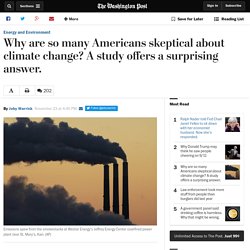 Mary’s, Kan. (AP) Climate change has long been a highly polarizing topic in the United States, with Americans lining up on opposite sides depending on their politics and worldview. Now a scientific study sheds new light on the role played by corporate money in creating that divide. The report, a systematic review of 20 years’ worth of data, highlights the connection between corporate funding and messages that raise doubts about the science of climate change and whether humans are responsible for the warming of the planet. Here's How You Buy a Professor's Academic Credibility. Cambridge University will hire a LEGO Professor to research play in education, development & learning. Prestigious Cambridge University, where brilliant minds including Stephen Hawking, Isaac Newton and Charles Darwin all studied, may soon see a heavy uptick in applications, perhaps filled out by slightly younger than average students: the university announced that it would establish a LEGO Professorship, hiring a Director of the Research Center on Play in Education Development and Learning. 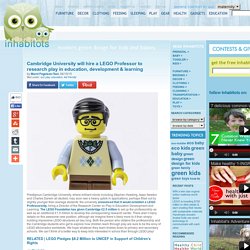 The LEGO Foundation has given Cambridge £2.5 million to set up the professorship as well as an additional £1.5 million to develop the corresponding research center. There aren’t many details on this awesome new position, although we imagine there’s likely more to it than simply building impressive LEGO structures all day long. Both the person who obtains the professorship and the Cambridge students who get to explore how children learn through play are sure to be the envy of LEGO aficionados worldwide. We hope whatever they learn trickles down to primary and secondary schools. Via Mashable. 'Everything is awesome': Cambridge University will get a Lego professor. Everything is awesome, including this hiring news from one of the UK's most prestigious institutions: Cambridge University is getting a Lego professor. 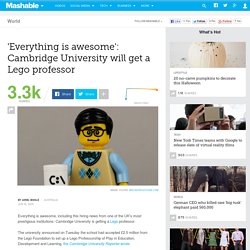 The university announced on Tuesday the school had accepted £2.5 million from the Lego Foundation to set up a Lego Professorship of Play in Education, Development and Learning, the Cambridge University Reporter wrote. The foundation also gifted the school an additional £1.5 million to set up a Research Centre on Play in Education, Development, and Learning within its Faculty of Education. One lucky professor will start the new role on October 1, 2015. No word yet on whether Cambridge students can spend their days building the Lego Starship Enterprise, rather than slaving over books. The Danish Lego Foundation, which owns 25% of the Lego Group, aims to reimagine and redefine learning and play for children aged 0 to 12, according to its website. Wp15105.pdf. Stephan Okhuijsen sur Twitter : "$5.000.000.000.000 (5 biljoen) subsidie op energie in 2015 wereldwijd. 95% direct op Fossiel.

How Large Are Global Energy Subsidies? Warwick for Free Education. This is the text of a speech given by Sophie Monk at Fossil Free Warwick’s demo on Thursday 12th. 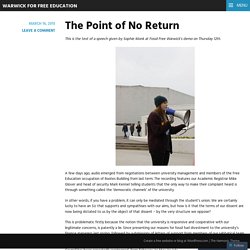 A few days ago, audio emerged from negotiations between university management and members of the Free Education occupation of Rootes Building from last term. BP dropped green energy projects worth billions to focus on fossil fuels. BP pumped billions of pounds into low-carbon technology and green energy over a number of decades but gradually retired the programme to focus almost exclusively on its fossil fuel business, the Guardian has established. 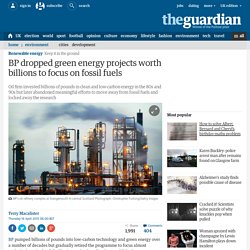 New Internationalist. European oil companies made headlines in June 2015 when they came out in favour of a global climate deal. 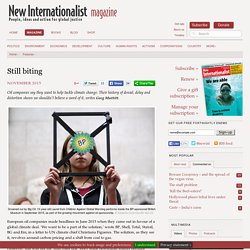 ‘We want to be a part of the solution,’ wrote BP, Shell, Total, Statoil, BG and Eni, in a letter to UN climate chief Christiana Figueres. Conflict of interest. The presence of a conflict of interest is independent of the occurrence of impropriety.

Therefore, a conflict of interest can be discovered and voluntarily defused before any corruption occurs. The Story of Shell FAIL. UT samen met BP in olieonderzoek. BP investeert 2 miljoen in UT-onderzoek. The scientists agree. The climate is changing, it’s caused by human behavior, and the risks ahead are real. Learn about the consensus. Hit the Fossil Fuel Industry Where it Hurts: Science. Time for climate scientists to go on strike. Late last night Yokohama time, the world’s scientists did once more what they’ve done so many times in the past: issued a thumping big report demonstrating that climate change poses the greatest danger our civilization has ever faced. 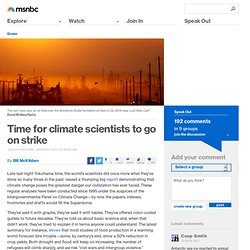 These regular analyses have been conducted since 1995 under the auspices of the Intergovernmental Panel on Climate Change – by now the papers, indexes, footnotes and drafts would fill the Superdome. They’ve said it with graphs, they’ve said it with tables. They’ve offered color-coded guides to future decades. They’ve told us about basic science and, when that didn’t work, they’ve tried to explain it in terms anyone could understand. We need an apartheid-style boycott to save the planet. 'The negative impacts of Keystone XL will affect the whole world, our shared world, the only world we have.' 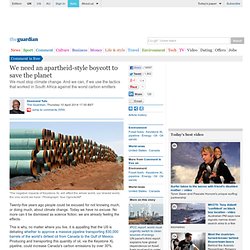 OccupyCalCampus : #OccupyCal #CalOpenU teach-in... Peerderijk : In 2012 is wereldwijd 544 miljard... Fossil-fuel subsidies worldwide $544 billion in 2012. The IEA, within the framework of the World Energy Outlook, has been measuring fossil-fuel subsidies in a systematic and regular fashion for more than a decade. Its analysis is aimed at demonstrating the impact of fossil-fuel subsidy removal for energy markets, climate change and government budgets. The IEA’s latest estimates indicate that fossil-fuel consumption subsidies worldwide amounted to $544 billion in 2012, slightly up from 2011 as moderately higher international prices and increased consumption offset some notable progress that is being made to rein in subsidies. Subsidies to oil products represented over half of the total. Since 2009 the IEA has provided ongoing input to the G-20 in support of their commitment to “rationalize and phase out over the medium term inefficient fossil fuel subsidies that encourage wasteful consumption”.