Statements by colleges, universities and organizations

Council for Christian Colleges & Universities - Statement About Orlando Shooting. Presbyterian Church (U.S.A.) - News & Announcements - PC(USA) leaders mourn victims of Orlando nightclub tragedy, recommit to advocating for a just society. We join our heavy hearts with the great multitude of those who mourn the killing and maiming of so many of our brothers and sisters at the Pulse club in Orlando, Florida. 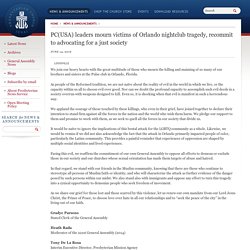 As people of the Reformed tradition, we are not naïve about the reality of evil in the world in which we live, or the capacity within us all to choose evil over good. Nor can we doubt the profound capacity to accomplish such evil deeds in a society overrun with weapons designed to kill. Even so, it is shocking when that evil is manifest in such a horrendous way. We applaud the courage of those touched by these killings, who even in their grief, have joined together to declare their intention to stand firm against all the forces in the nation and the world who wish them harm.

We pledge our support to them and promise to work with them, as we seek to quell all the forces in our society that divide us. Title IX Exemption and I'm Proud of It - Oklahoma Wesleyan University. Dr. 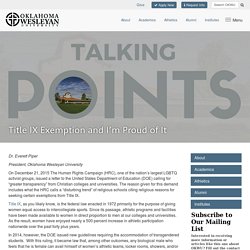 Everett Piper President, Oklahoma Wesleyan University On December 21, 2015 The Human Rights Campaign (HRC), one of the nation’s largest LGBTQ activist groups, issued a letter to the United States Department of Education (DOE) calling for “greater transparency” from Christian colleges and universities. The reason given for this demand includes what the HRC calls a “disturbing trend” of religious schools citing religious reasons for seeking certain exemptions from Title IX. Title IX, as you likely know, is the federal law enacted in 1972 primarily for the purpose of giving women equal access to intercollegiate sports. Sexuality Series - Programs - Student Life - Offices and Services - Calvin. Non-Discrimination Statement Update – President's Office – Eastern Mennonite University. On July 16, 2015, Eastern Mennonite University Board of Trustees met to review the non-discrimination statement that has been under review. 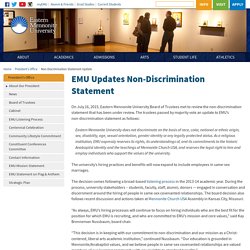 The trustees passed by majority vote an update to EMU’s non-discrimination statement as follows: Goshen College and EMU announce withdrawal from CCCU. This is a joint release of Goshen College and Eastern Mennonite University, Harrisonburg, Virginia. 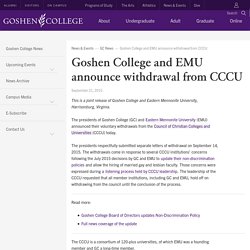 The presidents of Goshen College (GC) and Eastern Mennonite University (EMU) announced their voluntary withdrawals from the Council of Christian Colleges and Universities (CCCU) today. The presidents respectfully submitted separate letters of withdrawal on September 14, 2015. The withdrawals come in response to several CCCU institutions’ concerns following the July 2015 decisions by GC and EMU to update their non-discrimination policies and allow the hiring of married gay and lesbian faculty. 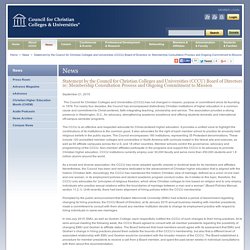 For nearly four decades, the Council has encompassed distinctively Christian institutions of higher education in a common cause and commitment to Christ-centered, faith-integrating teaching, scholarship and service. The association provides a strong presence in Washington, D.C., for advocacy, strengthening academic excellence and offering students domestic and international off-campus semester programs. The CCCU is an effective and respected advocate for Christ-centered higher education. Statement on Sexual Ethics - Gordon College. Covenant Love, Sexuality, and Community: Sexual Ethics in Biblical and Theological Perspective A note from Board Chairman: “This statement, which places sexual ethics in a biblical and theological perspective and is grounded in our evangelical identity, is simply intended as a fuller statement that expands on the basis for principles found in the College’s Life and Conduct Statement.”

Introduction Gordon College seeks to ground our understanding of human sexuality firmly in the Scriptures. We share a common commitment to the authority and truth of God’s Word as it unites us in the Body of Christ. Creation in the Image of God God’s nature is uniquely transcendent as well as personal and relational. When God chose to create adam male and female, God designed sexual human beings who would be capable of procreation (Gen 1:26–28). Gordon College maintains ban on 'homosexual practice,' creates human sexuality task force. After facing nearly a year of intense scrutiny, Gordon College announced Monday that its policy barring student or faculty sex out of heterosexual marriage will remain as is.

The college will, however, also roll out a series of initiatives meant to prevent bullying of gay, lesbian, bisexual and transgender students, and to remind others that Gordon’s adherence to “historic Christian teaching” does not provide them with license to judge those who do not meet the institution’s behavioral standards. “We remain as committed as ever to historic Christian teaching on this topic,” D. 11/2/15: Gay Issues Enter the World of Philanthropy. Photo When a donor made a $100,000 gift to the ’ Western Washington Council last March, it was time to break out the hand-shaped clappers. 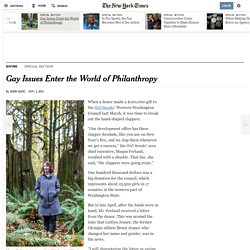 “Our development office has these clapper doodads, like you use on New Year’s Eve, and we clap them whenever we get a success,” the Girl Scouts’ area chief executive, Megan Ferland, recalled with a chuckle. That day, she said, “the clappers were going crazy.” One hundred thousand dollars was a big donation for the council, which represents about 25,500 girls in 17 counties in the western part of Washington State. But in late April, after the funds were in hand, Ms.

“I will characterize the letter as saying essentially that they had seen news coverage of the Girl Scouts allowing transgender girls to participate in their programs,” says Ms. Since its founding in 1912 by the philanthropist Juliette Gordon Low, the Girl Scouts organization has had a firm policy of inclusion. After the money was returned, Ms.

In a little over five hours, Ms.