New Genetic Study Seriously Challenges Darwin’s ‘Theory Of Evolution’ The Facts:Neuroplasticity shows us the ability to change our own brains by altering our perception of our environment through changing our thoughts, feelings, emotions, and actions.Reflect On:It's amazing how aspects associated with consciousness can literally change our biology. 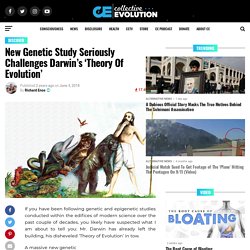 The brain is a very complex organ. It has nearly 100 billion neurons that send signals across tiny spaces referred to as synapses, of which you have nearly 40 trillion. This happens at a rate anywhere from 0.1-2 times per second, which means that between 18 and 640 trillion signals are sliding around in your brain every single second. It’s a mind altering thought, isn’t it? Well, the good news is that you can literally alter your mind, meaning that you can change the structure of your brain and rewire it. This is called the science of neuroplasticity.

Below is a great little video by Sentis explaining the basics of neuroplasticity. Does Neuroplasticity Originate In Your Brain, Or In Our Heart? I hope this helps. Frozen Remains of Extinct Lion Found in Russia. The frozen remains of a cave lion cub likely dating back to the last Ice Age were recently unveiled in Russia. 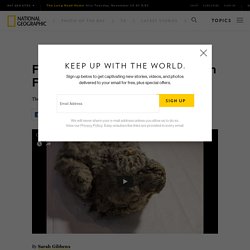 Local outlets reported that the remains of the roughly one-year-old cub were found in Russia's far northeastern Yukatia region this past September by a local resident. It's not the first time the frozen Siberian region has yielded prehistoric finds. The area's permafrost, or permanently frozen ground, is capable of preserving animals like cave lions and woolly mammoths, even tens of thousands of years after their species went extinct. The new cub comes just two years after two similarly frozen and intact lion cubs, named Uyan and Dina, were found. Dated to around 12,000 years old, Uyan and Dina were the first prehistoric cave lions found in such a well-preserved state. According to Interfax, Russia's main independent newswire, the new cub—who has yet to be named—has been given to the country's Republic Academy of Sciences.

Cave lions went extinct roughly 10,000 years ago. They Set Up A Camera In The Forest And Captured The Most Incredible Scene Ever. Guy Hides Camera In Bucket Of Water To See Who Comes To Drink, And Result Doesn’t Disappoint. A video showing desert critters secretly filmed approaching a water bucket to quench their thirst is going viral. 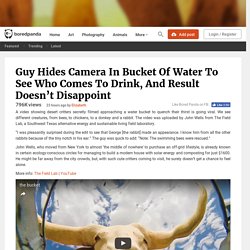 We see different creatures, from bees, to chickens, to a donkey and a rabbit. The video was uploaded by John Wells from The Field Lab, a Southwest Texas alternative energy and sustainable living field laboratory. Show Full Text “I was pleasantly surprised during the edit to see that George [the rabbit] made an appearance. I know him from all the other rabbits because of the tiny notch in his ear.” John Wells, who moved from New York to almost ‘the middle of nowhere’ to purchase an off-grid lifestyle, is already known in certain ecology-conscious circles for managing to build a modern house with solar energy and composting for just $1600. Beth Moon Photographs The World’s Oldest Trees Illuminated By Starlight. Ancient trees affected by cosmic rays are the subject of The “Diamond Nights” project by San Francisco-based photographer Beth Moon. 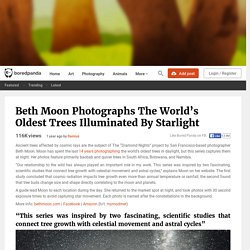 Moon has spent the last 14 years photographing the world’s oldest trees in daylight, but this series captures them at night. Her photos feature primarily baobab and quiver trees in South Africa, Botswana, and Namibia. “Our relationship to the wild has always played an important role in my work. This series was inspired by two fascinating, scientific studies that connect tree growth with celestial movement and astral cycles,” explains Moon on her website. The first study concluded that cosmic radiation impacts tree growth even more than annual temperature or rainfall; the second found that tree buds change size and shape directly correlating to the moon and planets. A guide lead Moon to each location during the day. More info: bethmoon.com | Facebook | Amazon (h/t: mymodmet) Thanks for sharing! 3x per week 30,000,000+ monthly readers Error sending email. EWAO Continued Research Supports The ‘Water Has Memory’ Theory.

These amazing discoveries about the properties of water could revolutionize our world! 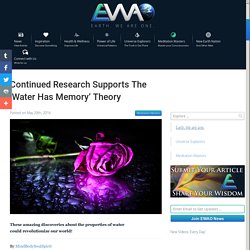 By MindBodySoulSpirit Filmmaker and mystic ecologist David Sereda discussed some of the amazing properties of water– it may actually have memory and consciousness, he said. Human beings are mostly made up of water and he suggested that restructured water could have healing properties on their bodies. An example that Serada gives is how restructured water can transform polluted water into clean, fresh, and palatable drinking water! Following up on the groundbreaking work of Masaru Emoto, Sereda exposed water to the sounds of the sun, and the water crystals changed to a beatific shape. Could water itself be a kind of memory system, actually containing the Akashic Records? Nature Is Speaking – Robert Redford is The Redwood. Nature Is Speaking: Reese Witherspoon is Home.