The Terrifying Future of The United States 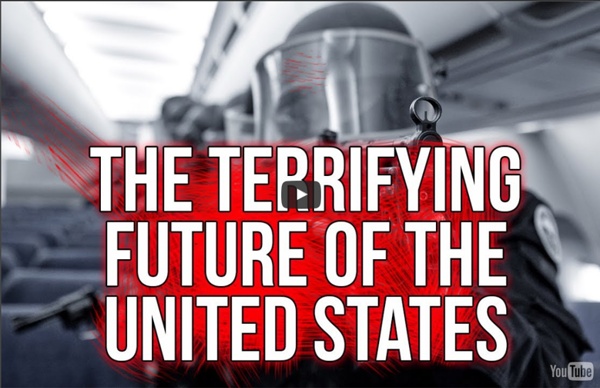 Fed seizures of private wealth begin: Grocery store owner has all his accounts seized by government for no reason (NaturalNews) In yet another example of how the federal bureaucracy was not established to aid and assist American liberty and entrepreneurship, a small-time grocer, who has his life savings wrapped up in his business, is now in danger of losing everything, compliments of Uncle Sam's Administrative State. According to the Institute for Justice, a non-profit libertarian civil rights legal group, the Feds appear to have seized more than $35,000 from Terry Dehko and his family, through "civil forfeiture" laws, without justification or good cause. From the institute, per a web release: Can the government use civil forfeiture to take your money when you have done nothing wrong - and then pocket the proceeds? They can seize it all - without ever charging you with a crime "Federal forfeiture law allows the government to take your entire bank account just because it doesn't like the way you deposit or withdraw your money," said IJ Senior Attorney Clark Neily. How does that happen in America?

Alternative Treatment for Chronic Lyme Disease - Dr. Franco, Sunridge Medical Obama Executive Order would seize US infrastructure, citizens for nat'l defense - Spokane Conservative On Friday, President Obama signed a sweeping Executive Order that would effectively nationalize everything - including food, water and U.S. citizens - in order to prepare for national defense. Worse yet, the order would also allow for a civilian draft - the conscription of “persons of outstanding experience or ability” without compensation. A post at Current.com adds: The EO also states that the President and his Secretaries have the authority to seize all transportation, energy, and infrastructure inside the United States as well as forcibly induct/draft American citizens into the military. "The National Defense Resources Preparedness Executive Order exploits the “authority” granted to the President in the Defense Production Act of 1950 in order to assert that virtually every means of human survival is now available for confiscation and control by the President via his and his Secretaries’ whim," Current notes. Under the section dealing with labor, the order says: Sec. 601. Sec. 502.

New greenhouse gas dwarfs CO2 impact China's smog is an example of pollution that contributes to global warming. Image Credit: CC BY-SA 2.0 Ilya Haykinson A recently discovered gas appears to be 7,000 times more impactful on climate change than CO2. Perfluorotributylamine (PFTBA) is a non-naturally occurring gas that has been produced primarily by the electrical industry since the mid 20th century. "We claim that PFTBA has the highest radiative efficiency of any molecule detected in the atmosphere to date," said study co-author Angela Hong. Fortunately PFTBA is relatively scarce at the moment with concentrations in the atmosphere measuring approximately 0.18 parts per trillion in comparison to carbon dioxide's 400 parts per million. "This is a warning to us that this gas could have a very very large impact on climate change - if there were a lot of it," said NASA climatologist Drew Shindell. Source: University Herald | Comments (18) Tags: Climate Change, Global Warming

Bayer and US Government Knowingly Gave HIV to Thousands of Children What if a company that you thought you could trust, knowingly sold you a medicine for your child that they knew had the potential to give your child HIV? How would you react? What if a government agency that claims the responsibility for protecting you from such treachery, not only looked the other way, but was complicit in this exchange? Everyone has heard of Bayer aspirin, it is a household name. In 1984 Bayer became aware that several batches of this Factor 8 contained HIV. Unable to sell their Factor 8 in the US, Bayer, with the FDA’s permission, (yes that’s right, the FDA allowed Bayer to potentially kill thousands) sold this HIV infected medicine to Argentina, Indonesia, Japan, Malaysia, and Singapore after February 1984, according to the documents obtained by the NY Times. The result of this sale of HIV tainted medication ended up infecting tens of thousands and killing thousands. No one in the government nor Bayer have been charged with anything in regards to this matter.

The International Plot to Steal All Retirement Accounts Dave HodgesActivist Post Almost three months ago, the Saturday night host of Coast to Coast AM, John B. Wells and I were co-guests on the same show in which he expressed the view that Putin and Obama were playing for the same team and that the apparent Russian/American conflict over Syria and Iran was merely an exercise in theater. I had actually thought Putin was standing up to America’s imperialism and stood in opposition to Obama’s incremental plan to insert America into Syria and then Iran. One week ago, while appearing on my show, The Common Sense Show, John B. The only plausible explanation on why Putin and Obama would be pursuing the same strategy, with regard to absconding with their nation’s retirement funds, is because both leaders are actively pursuing the same strategy as I write these words. Grand Larceny, Russian Style Russian authorities claim that they will only hold the retirement money for one year while they check to see that banking institutions are sound. Analysis

7 Future Methods of Mind Control Nicholas WestActivist Post The mission of a small "elite" group to control the masses is nothing new. It has always been a tool implemented in the form of propaganda used to alter perception and thus steer the direction of large populations. The modern methods of mind control are in many ways merely higher-tech extensions of what always has been predictably successful: religion, sports, politics, education, etc. With the advent of television, a whole new world was opened up for would-be controllers, as news media was easily corporatized and made uniform enough to translate core messages, while encouraging passivity, and also presenting the illusion of choice. Nevertheless, despite the above assaults, people are rebelling -- globally. The mind control of the future forgoes all pretense at indirectly altering perception through media and politics, as that continues to be exposed for what it truly is. Surveillance and Gadgets -- Surveillance alone can change the way we think and act. Why?

Salt Sugar Fat: How the Food Giants Hooked Us on Deadly Junk July 17, 2013 | Like this article? Join our email list: Stay up to date with the latest headlines via email. Bet you can’t read just one page of Salt Sugar Fat: How the Food Giants Hooked Us, the unapologetically unsugarcoated exposé of the processed food industry’s tricks to spur addiction. But that story is only part of the larger one that Moss has to tell us about the corporate competition for our taste buds and our resulting ever-expanding tummies. Moss opens his chronicle in 1999, at a top-secret meeting of the CEOs of some of the food industry’s largest companies: Nestlé, Kraft, Nabisco, General Mills, Procter & Gamble, Coca-Cola, and Mars. To be sure, self-interest drove the proposal put forth at this meeting for an industrywide code to tone down advertising, especially to children, and lead a campaign to promote exercise.