Tax avoidance may be legal but it’s bankrupting our social order. In the coming days, you will hear this response from the defenders of our rotten status quo. 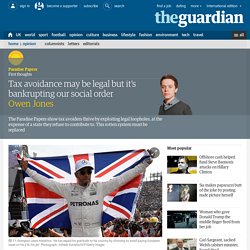 “What the Paradise Papers has exposed is legal, so what is the problem?” They have an agenda, of course. They want to demonise the very concept of taxation because they want to roll back the state and construct a free-market “utopia” which, in practical terms, would be dystopian for the vast majority. Let’s unpick this argument.

Using sophisticated loopholes to avoid tax on an industrial scale is a choice, a conscious decision, that an individual or business has to take. Those who crow about the “legality” of tax avoidance are, of course, being disingenuous. Most workers are on PAYE, and cannot deviously exploit loopholes to slash their tax deductions. As it so happens, two law professors have reportedly described Hamilton’s scheme as potentially “abusive”, with one suggesting that existing laws are not being enforced. . • Owen Jones is a Guardian columnist. IMF Says Higher Taxes for Wealthy Good Idea. And These Billionaires Agree.

As President Donald Trump and the Republican Party move ahead with their attempt to deliver massive tax cuts to the wealthiest Americans, an analysis by the International Monetary Fund published Wednesday finds that the U.S. economy would be much better off if they did precisely the opposite. 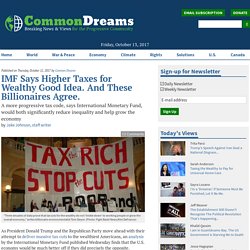 "Three decades of data prove that tax cuts for the wealthy do not 'trickle down' to working people or grow the overall economy. " —Tom Steyer, NextGen AmericaContrary to GOP talking points, the new report notes that "empirical evidence does not support" the argument that higher taxes for those in a nation's top income brackets would hinder economic growth. The IMF's analysis comes as a growing number of wealthy Americans are joining the opposition to Trump's regressive tax plan—which would slash the top individual tax rate from 39.6 percent to 35 percent—and calling for higher taxes on those at the very top.

Our Enormous Retirement Subsidies for the Rich. In the State of the Union address, Obama revealed that he will be implementing a myRA plan, which is basically an Individual Retirement Account administered by the government. 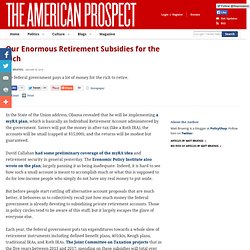 Savers will put the money in after-tax (like a Roth IRA), the accounts will be small (capped at $15,000), and the returns will be modest but guaranteed. David Callahan had some preliminary coverage of the myRA idea and retirement security in general yesterday. The Economic Policy Institute also wrote on the plan, largely panning it as being inadequate. Indeed, it is hard to see how such a small account is meant to accomplish much or what this is supposed to do for low-income people who simply do not have any real money to put aside. But before people start rattling off alternative account proposals that are much better, it behooves us to collectively recall just how much money the federal government is already devoting to subsidizing private retirement accounts. Advertisement Who captures these subsidies? Comments. Georgism (geolibratarian)

I think we can use our tax system to create a better... Emmanuel Saez and Thomas Piketty. In the United States, the share of total pre-tax income accruing to the top 1% has more than doubled, from less than 10% in the 1970s to over 20% today (pdf). 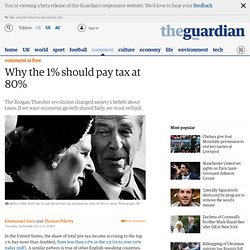 A similar pattern is true of other English-speaking countries. Contrary to the widely-held view, however, globalisation and new technologies are not to blame. Other OECD countries, such as those in continental Europe, or Japan have seen far less concentration of income among the mega rich. At the same time, top income tax rates on upper income earners have declined significantly since the 1970s in many OECD countries – again, particularly in English-speaking ones.

For example, top marginal income tax rates in the United States or the United Kingdom were above 70% in the 1970s, before the Reagan and Thatcher revolutions drastically cut them by 40 percentage points within a decade. So, the evolution of top tax rates is a good predictor of changes in pre-tax income concentration. Income & Wealth Inequality.

Related:  Thomas Piketty   -  What means neoliberalism   -  No war of conquest, nothing to reconquer. Really?   -  ...can not be enforced without conquest of the power   -  Economics   -  Social Sciences   -  Education   -  Enterprise