Instructables. The sheets of plastic were initially attached with handclamps. Each patch is up to 12' x10', but the center point and interior cut have to be positioned to within 1/2" vertically, horizontally, and rotationally to place the end of the cut right in the middle of the hub and running straight up the strut. I didn't actually cut out the small wedge in the patch diagram; I slit the wedge down the middle so that the two edges would overlap when the piece was wrapped around the (non-flat) hexagon at the center. When the positioning was right I stapled the plastic lathing onto the center seam by overlapping the cut from above, to allow it to shed water. Our Geodesic Dome Connector - How it Works! Danish dome-sheltered community center is built with wood. Behance. Smartdome – Smartdome Constructions.

How one construction company is thinking. These revolutionary Eco Domes use air to construct the worlds greenest habitat so far. Domes represent a way of constructing buildings that inherit a lot of things long forgotten. 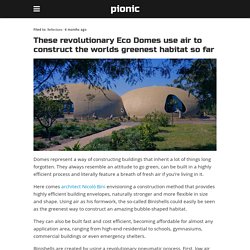 They always resemble an attitude to go green, can be built in a highly efficient process and literally feature a breath of fresh air if you’re living in it. Here comes architect Nicoló Bini envisioning a construction method that provides highly efficient building envelopes, naturally stronger and more flexible in size and shape. Using air as his formwork, the so-called Binishells could easily be seen as the greenest way to construct an amazing bubble-shaped habitat.

They can also be built fast and cost efficient, becoming affordable for almost any application area, ranging from high-end residential to schools, gymnasiums, commercial buildings or even emergency shelters. Home - Postech screw piles - Thermal Screw Piles - Experts. Off-grid Autonomous Tents are made for luxurious camping. DomUp Treehouse. Eternal Earth Technologies Incorporated. This prefab eco-home in the forest spins around at the push of a button to let in optimal sunlight. Eighty miles from New York City’s bustling core is a rotating wooden structure, resembling an alien spacecraft and designed to withstand nearly any disaster. 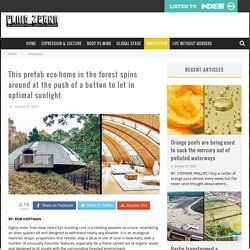 It is an ecological mansion of epic proportions that resides atop a 28-acre slot of land in New Paltz, with a number of unusually futuristic features, especially for a home carved out of organic wood and designed to fit snugly with the surrounding forested environment. Designed by Patrick Marsilli, the home known as Domespace, is one of two major concepts from Solaleya, an ecologically inspired architecture company with a mission to provide stunning, functional homes that preserve environmental integrity. Fforest Dome. Fforest’s most famous feature is the dome. 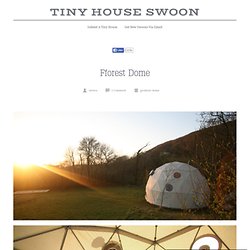 We were the first in the UK to have them and continous improvement means ours are still the best. Each dome is sited to offer privacy and take advantage of the wonderful views on offer. More than 16000 Photos, articles. New ideas for home design. April 12, 2011 7:50 AM Gaby Lingke shared with us a short documentary about architect Fritz Eisenhofer , who designed and built a futuristic earth-sheltered dome in Peka Peka , Aotearoa, New Zealand . 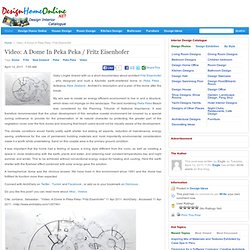 Architect’s description and a plan of the dome after the break. My aim was to create an energy efficient environment to live in and a structure, which does not impinge on the landscape. The land bordering Peka Peka Beach was considered by the Planning Tribunal of National Importance. Build Your Own Dome Structure or a DIY Dome Survival Shelter. Using Bamboo Mesh and Render – Learn How to Build a Really Strong Dome Structure, Dome Shelter or Even Survival Bunker using a cheap and efficient System A Comprehensive DIY Guide A Graphical Story of Two Dome Projects Lombok Indonesia – 7.0m Diameter Tourist Resort Byron Bay Australia – Free Form Earth Covered Storm and Fire Shelter. 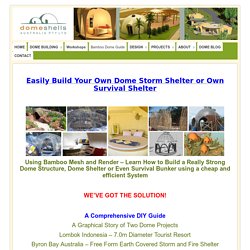 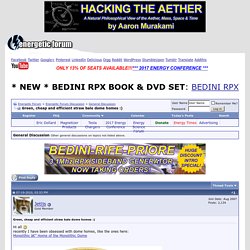 The dome structure is very solid, it now supports around 3-4 tons of weight with all the clay and straw bales. The work is rather hard and weather dependent, if it is raining, you need to cover the dome with something to prevent water damage, if it is sunny, you need to remove the rain protecting plastic or whatever so that clay can dry better. You need to do all the inside and outside clay works before you can proceed to waterproofing the inner and outer surface. Constructing Our Geodesic Dome — ByExample.com. After a year of living and camping in the desert, Patrick and I decided to build a geodesic dome structure to provide us with shade and shelter from the elements. 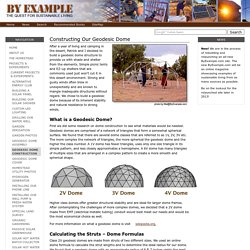 Simple picnic tents and EZ-up shelters that are commonly used just won't cut it in this desert environment. Strong and gusty winds often blow in unexpectedly and are known to mangle inadequate structures without regard. We chose to build a geodesic dome because of its inherent stability and natural resistance to strong winds. 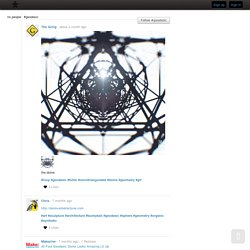 Fforest Dome. Round House Design Offers a Unique Architectural Experience. This beautiful Round House is a unique home design concept where soft curves replace the dusty corners of a typical four-sided home. 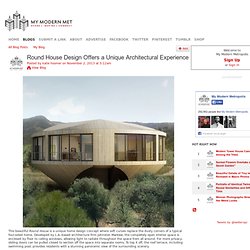 Developed by L.A. -based architecture firm Johnston Marklee, the completely open interior space is enclosed by floor to ceiling windows, allowing light to radiate throughout the space from all around. For more privacy, sliding doors can be pulled closed to section off the space into separate rooms. To top it off, the roof terrace, including swimming pool, provides residents with a stunning panoramic view of the surrounding scenery.

The project is part of Solo Houses, a program developed in 2010 to revolutionize the world of architecture. Johnston Marklee websiteSolo Houses website via [MoCo Loco] Word Pro - Formula.lwp - formulas.pdf. Domebuilder's Blues. Buckminster Fuller didn’t invent the geodesic dome. The first guy who stitched together a soccer ball did. Soccer balls are made up of the same configuration of hexagons and pentagons. Just take a soccer ball and cut it in half — in your mind’s eye, anyway — and you’ve got the basic design. As a matter of fact, the plutonium core of a nuclear weapon is put together exactly the same way. Timberline Geodesics. Geodesic Structures Pre-Planning Architectural Options Construction. 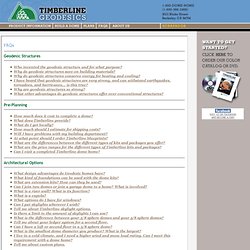 Eco_shell. New construction technique allows concrete domes to be "popped up" There probably aren't many domed concrete structures where you live, and there's a reason for that – they're difficult to build. Doing so usually requires the construction of a supporting wooden structure, that holds the concrete in place while it hardens. Now, however, a team at the Vienna University of Technology has devised a system that allows concrete shell structures to simply be "inflated" and cinched together with a steel cable. View all Called the pneumatic wedge method, the technique has been likened to peeling an orange and lying its skin flat on a table – except in reverse. Here's how it works ... First, a number of flat rebar forms are laid out side-by-side on the ground at the building site, on top of a deflated plastic air cushion (see the photo below).