The Treehouse Guide - Seven stage tree house design workflow. There is a lot to learn about treehouses before you start building if you want a safe, long lasting and economical structure. 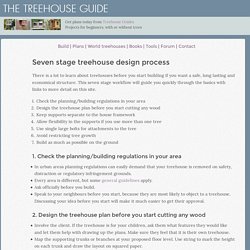 This seven stage workflow will guide you quickly through the basics with links to more detail on this site. Check the planning/building regulations in your area Design the treehouse plan before you start cutting any wood Keep supports separate to the house framework Allow flexibility in the supports if you use more than one tree Use single large bolts for attachments to the tree Avoid restricting tree growth Build as much as possible on the ground 1. Check the planning/building regulations in your area In urban areas planning regulations can easily demand that your treehouse is removed on safety, distraction or regulatory infringement grounds. 2. Involve the client. 3. Aim for a level floor capable of taking the entire weight of the house. 4. If more than one tree is used they must be allowed to move in the wind or the treehouse can be easily damaged. 5. 6. 7.

So you want to install a Garnier limb? Author’s note: This post was originally published in late 2008, and for those of you about to try your hand at treehouse construction and setting Garnier limbs, I hope this gives you a good start. 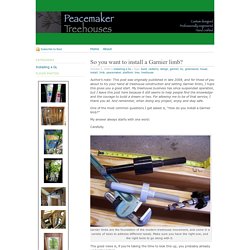 My treehouse business has since suspended operation, but I leave this post here because it still seems to help people find the knowledge and the courage to build a dream or two. For allowing me to be of that service, I thank you all. And remember, when doing any project, enjoy and stay safe. One of the most common questions I get asked is, “How do you install a Garnier limb?” My answer always starts with one word: Terenobu Fujimori. Les Galants. Treehouses by takashi kobayashi, japan. Takashi kobayashi is a self-taught designer that has brought treehouse vernacular to the japanese landscape. the carpenter and architect of 120 houses throughout japan, his prolificness is borne of a deep-seated investment in the creation of a new architectural tradition in his country added to the hefty, overall aim of each project- to erode the boundary between man and nature. using reclaimed wood, the designer and his collective treehouse people have developed methods since the first building in 1993 for the arboreal structures balanced on living boughs and limbs that avoid stunting the growth of the tree. 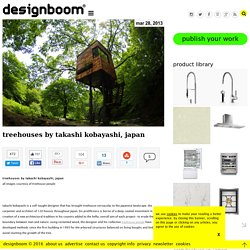 Visite Privée : Une cabane perchée dans les arbres en Écosse. Tree tents by luminair. Nov 26, 2012 tree tents by luminair ‘tree tents’ by luminairall images courtesy of luminair the culmination of three years worth of research, these ‘tree tents’ by luminair are coming to forests near you. bringing awareness to the timber harvest and lifecycle, these suspended capsules bring comfortable and low impact retreats up in the canopies. the living spaces are contained by a sustainable structural frame enclosed with high density cotton canvas fabric. a combination of green ash wood and strong, lightweight hybrid aluminum sub-frame components are easily transported and assembled. steam-bent into a spherical shape, the form spreads loads across the structure to absorb movements of inhabitants. its 100% waterproof exterior is insulated with sheep wool, making the shelters perfect for year-round use and semi-permanent camps. it comes in olive green, red and natural. spherical tent suspended amidst tree trunks ladder leads into front door side window door entry fabric door rolled up bedroom. 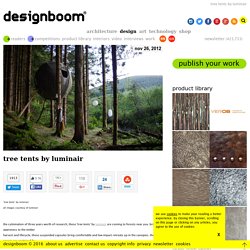 Carpenter builds incredible egg-shaped treehouse hidden from view on Crown land just yards from multi-million homes. By Leon Watson Published: 15:40 GMT, 23 April 2012 | Updated: 10:24 GMT, 25 April 2012 It took months to find the right tree to build on, and when he did the spot was on public land looking down on a row of multi-million dollar homes. 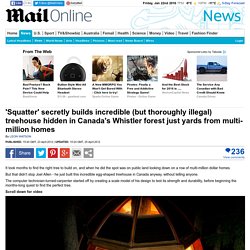 But that didn't stop Joel Allen - he just built this incredible egg-shaped treehouse in Canada anyway, without telling anyone. The computer technician-turned-carpenter started off by creating a scale model of his design to test its strength and durability, before beginning the months-long quest to find the perfect tree. Scroll down for video Joel Allen stepping into the amazing treehouse he built on public land in Canada at night Joel Allen has built this incredible treehouse in Hemlocks, Whistler, western Canada Joel took years to construct the treehouse.

Without the money to buy property, he decided to do it on Crown land in the forests of Whistler. 'Finding that perfect spot on Crown land wasn't so easy,' he said. Finally, he created the HemLoft. Loaded: 0% (5) Construire une cabane dans les arbres: suspendue - Atelier brico Hornbach. TreehouseSupplies. Série 36 Vidéos / How to build a treehouse. Upload More Wranglerstar Wranglerstar Loading... 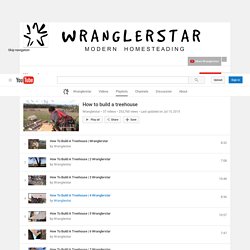