I Dream Of A Rocket Mass Heater This Winter.....41 Fantastic Views 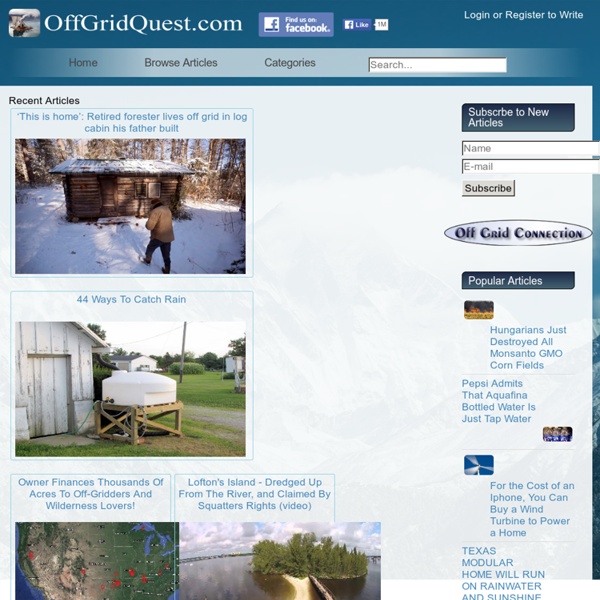 Rocket Mass Heaters: The coolest sustainable heater The rocket mass heaters work on the same basic principles as a masonry heater. A fast, high heat and oxygen rich fire burn up the volatile gases and particulates, leading to a very clean combustion and turn a large portion of the fuel into usable heat. In a well designed system smoke is released only during the first minutes of a burn, until the temperature in the burning chamber is high enough to burn all gases. The major difference in the design of a rocket mass heater in comparison with a masonry heater is that the rocket heater has an insulated J or L shaped combustion chamber which forces the fire to burn horizontally.

Greece Could Seize Personal Assets; Portuguese banks gamble with government debt - ValueWalk Greeks have to declare all their wealth From January 2017, 8.5 million Greek citizens have to file a declaration of their belongings. The government is on the hunt for real estate, jewellery, art and even cash – outside the banking system. Before government implements new tax, a directory of the soon-taxed wealth has to be prepared. Today Greece is required to auction public riches to service their debt. The debt which is impossible to be repaid even if all priceless monuments are sold.

Cordwood Log Cabins Wooden cabins are really great, especially for spending your holiday. If you would like to build yourself such a cabin in order to have your own island of relaxation, then you should consider making some small changes in the basic wooden cabin structure. We are thinking about building the walls of the cabin out of stone. You can of course create just one stone wall, but 4 such walls should offer you a much stable structure.

Dome of Visions: Mobile Greenhouse Studio Boasts a Facade of CNC-Cut "Fish Scales" in Copenhagen Kristoffer Tejlgaard and Benny Jespen designed an amazing new geodesic bubble building that recently popped up at Copenhagen harbor. Called Dome of Visions, this mobile greenhouse studio boasts an innovative facade of overlapping CNC-cut polycarbonate "fish scales" and all kinds of flora, including a 100-year-old olive tree. In addition to hosting artists, musicians, and other cultural events in Copenhagen and other cities, the dome will also provide a platform for serious discussion about the future of sustainable housing in a changing world.

The Basics on Rocket Mass Heaters If you think curling up next to a roaring fire during the cold winter months is pleasant, wait until you grab a book and settle on the warm bed of a rocket mass heater. The heated thermal mass remains warm for hours, offering an immensely comfortable and practical living space. Rocket mass heaters are a contemporary adaptation to the long-standing technology of masonry stoves where the goal is to heat a thermal battery that slowly releases its warmth rather than attempting to continually heat the air in the room. One of the primary differences is a rocket mass heater has an extended horizontal “bed” that can be utilized as a functional area. While it has a larger footprint than the vertically built masonry stoves, the simple design and fairly inexpensive materials of a rocket mass heater make it a task practically any thoughtful do-it-yourselfer can tackle.

ZNet About 1,600 people have so far signed up on the We Stand Site. We need a great many more for this effort to sustain positive activity.Please Sign. Please take the statement to relatives, friends, schoolmates, and workmates. Please comment anywhere online, or in social media, or by blogging, or perhaps writing an article, or prodding alternative media to relate to the effort.Will you Sign? Cordwood Sheds and Cabins - Rustic Fabulous Cordwood Sheds and Cabins also known as Stackwall, Stovewood, Firewood or Cordwood Masonry. On the final page, be sure to watch the great video on how to build a cordwood cabin! cordwood shed Short lengths of debarked trees (cordwood) are laid with a mixture of mortar and insulating materials - such as sawdust or spray foam - in between the mortar. The longer the length of the logs, the better the insulation qualities. 12 inches to 18 inches is most common and wood species will also determine insulating value. On average, a 12 inch wide wall will have a 20-25 R value. Cabin by Rob Roy.

Rocket Mass Heaters and Rocket Stoves at Wheaton Labs (with pics!) Here is a list of all the rocket mass heaters and rocket stoves at wheaton labs. A rocket mass heater is a space heating system developed from the rocket stove, an efficient cooking stove invented for and introduced in developing nations in the late 80's and early 90's to decrease fuel usage and smoke emission. The Rocket mass heater is a hybrid with elements of this efficient wood burning stove and a masonry heater. In contrast to the masonry heater, which requires advanced masonry skills, the rocket mass heater can be built by any enthusiast with basic masonry and engineering skills. A rocket mass heater can usually be put together using recycled and natural materials such as cob, bricks, rocks and a metal barrel or cylinder. The thermal storage is large enough to retain heat for many hours or even days and typically forms part of the structure of a building.