MEMS mike draws almost no power. 25 May 2017 Acoustic sensor developer Vesper has launched the VM1010, said to be the first MEMS microphone to enable voice activation while drawing almost no power. 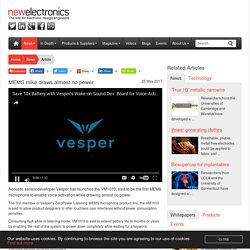 The first member of Vesper’s ZeroPower Listening MEMS microphone product line, the VM1010 is said to allow product designers to offer touchless user interfaces without power consumption penalties. Consuming 6µA while in listening mode, VM1010 is said to extend battery life to months or years by enabling the rest of the system to power down completely while waiting for a keyword. “We are seeing a ‘Cambrian Explosion’ of voice-enabled consumer electronics, including smart speakers, smart earbuds and diverse IoT products,” said Matt Crowley, Vesper’s CEO. “The problem is that speech recognition can consume 1mW or more and that is why most voice-activated devices must be plugged in. The VM1010 is a low-noise, high dynamic range, single-ended analogue output piezoelectric MEMS microphone.

Author Graham Pitcher. Playing Chess on a Beautiful, Magnetized Globe. “I think I can do it better.” 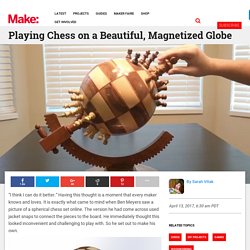 Having this thought is a moment that every maker knows and loves. It is exactly what came to mind when Ben Meyers saw a picture of a spherical chess set online. The version he had come across used jacket snaps to connect the pieces to the board. He immediately thought this looked inconvenient and challenging to play with. So he set out to make his own. Photography and media by Ben Meyers The board took about five weeks to complete from start to finish.

It is obvious when looking at the beautiful final product that each piece was artfully crafted with exceptional attention to detail. From here, the base was turned on the lathe and a router was used to make the curved arm. Finally, the spacer and knob used to turn the board were made on the lathe. Meyers has had some difficulty getting people to play with him as the spherical chessboard can be a little bit intimidating. Support de téléphone portable PUSHMAN par Cre8tive3D. ESP8266 Successor – ESP32 released with CAN support  &#x200b;o, the interesting little ESP8266 WiFi SoC finally has a younger brother which appears to be even more capable. 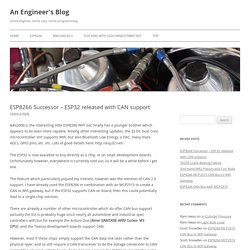 Among other interesting updates, the 32 bit Dual Core microcontroller still supports WiFi, but also Bluetooth Low Energy, a DAC, many more ADCs, GPIO pins, etc. etc. Lots of good details here: The ESP32 is now avaialble to buy directly as a chip, or on small development boards. Touch Screen coffee table DIY with 32" TV and low cost CCD sensor. This solution implies the use of light triangulation to read a very precise coordinate. 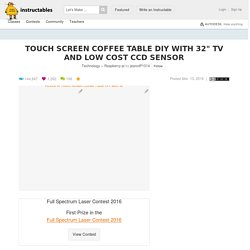 Basically, it's like having a huge number of IR receptors with some IR LED. You turn on every LED one by one and read the sensors. When one receptor can't see any light, it means that an object is blocking the light. With enough LED and sensors you can get a much more precise solution. MichMich/MagicMirror: MagicMirror² 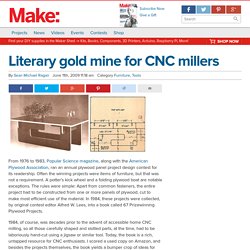 Often the winning projects were items of furniture, but that was not a requirement. A potter’s kick wheel and a folding plywood boat are notable exceptions. The rules were simple: Apart from common fasteners, the entire project had to be constructed from one or more panels of plywood, cut to make most efficient use of the material. In 1984, these projects were collected, by original contest editor Alfred W. Lees, into a book called 67 Prizewinning Plywood Projects. 1984, of course, was decades prior to the advent of accessible home CNC milling, so all those carefully shaped and slotted parts, at the time, had to be laboriously hand-cut using a jigsaw or similar tool. Fanciest Camping Tent Trailer Ever! 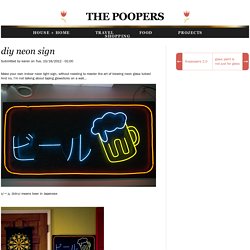 And no, I'm not talking about taping glowsticks on a wall... ビール (biiru) means beer in Japanese Cocktails, anyone? Since I had been planning to help Mr. Pooper redecorate his office, I wondered what I could do to add some more personal elements to his man space (no, that's not his office above with the barcart...).

Not surprisingly, I ended up on various web stores that sell something called EL Wire (electroluminescent wire). Level of difficulty This how-to is going to be fairly extensive, and dedicated to the intermediate crafter (whatever that means). But...if you're not to the task and want to play around with EL wire anyway, coolneon.com sells pre-assembled kits that have one color of wire already hooked up. About EL Wire EL Wire is similar to your standard electrical wire. The light coming from EL Wire has varying intensities depending on the type and thickness you buy.