Portrait of an Introvert 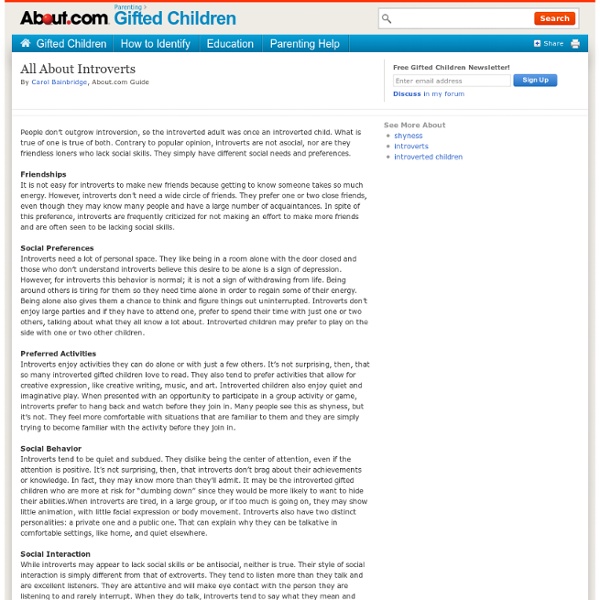 People don’t outgrow introversion, so the introverted adult was once an introverted child. What is true of one is true of both. Contrary to popular opinion, introverts are not asocial, nor are they friendless loners who lack social skills. Friendships Sebastian Pfuetze/Taxi/Getty Images It is not easy for introverts to make new friends because getting to know someone takes so much energy. Social Preferences Introverts need a lot of personal space. Preferred Activities Introverts enjoy activities they can do alone or with just a few others. Social Behavior Introverts tend to be quiet and subdued. Social Interaction While introverts may appear to lack social skills or be antisocial, neither is true. Verbal Expression If given a choice, introverts would rather express their ideas in writing than in speech. Emotions and Emotional Responses Introverts become emotionally drained after spending time with others, particularly strangers. Other Traits and Preferences Related:  Holistic Living

Calm Down Mind The Pirate Bay The Pirate Bay is the largest torrent website in the world. According to the RIAA, it rates somewhere between Nazi Dinosaurs and The League of Extraordinary Evil on the Global Threat Scale. &&(navigato Just The Facts No matter how you cut it, The Pirate Bay is ultimately just a collection of thieves. However, its chief rival is the RIAA: An even larger and more vicious collection of thieves. Cracked on the Pirate Bay Pirate Bay, huh? Wait, that's not The Pirate Bay; this is the Pirate Bay: So overall, it's less swashbuckling anti-hero than it is Swedish metal fans who are good with computers. So if you don't truly grasp the concept of intellectual property or only read up to the seventh commandment, you can use these things to download tons of music for free. The continuing operation of The Pirate Bay is chiefly a triumph for enemies of the RIAA, which, by our last count, is everyone who isn't the RIAA. Legal Issues

Type-Coach.com The Science of Stress, Orgasm and Creativity: How the Brain and the Vagina Conspire in Consciousness “The more closely we analyze what we consider ‘sexy,’” philosopher Alain de Botton argued in his meditation on sex, “the more clearly we will understand that eroticism is the feeling of excitement we experience at finding another human being who shares our values and our sense of the meaning of existence.” But in his attempt to counter the reductionism that frames human sexuality as a mere physiological phenomenon driven solely by our evolutionary biology, de Botton overcompensates by reducing in the opposite direction, negating the complex interplay of brain and biology, psychology and physiology, that propels the human sexual experience. That’s precisely what Naomi Wolf, author of the 1991 cultural classic The Beauty Myth, examines in Vagina: A New Biography (public library) — a fascinating exploration of the science behind the vastly misunderstood mind-body connection between brain and genitalia, consciousness and sexuality, the poetic and the scientific. Wolf writes:

Be True To Yourself To be true to yourself means to act in accordance with who you are and what you believe. If you know and love yourself you will find it effortless to be true to yourself. Just as you cannot love anyone else until you love yours elf, you cannot be true to anyone else until you are true to yourself. Be who you are! Many young people believe that when they do things to please their peers, such as drink when they shouldn't, or behave and party in inappropriate ways, they will be popular and liked. When you do things that are not genuine or a reflection of the real you, you will not be happy with yourself and will end up confused. Self-respect comes from being true to who you really are and from acting in accordance with your fundamental nature. When you respect yourself, others will respect you. When you are true to yourself, you allow your individuality and uniqueness to shine through. To be true to yourself takes courage. Related articles: <div class="statcounter"> &nbsp; </div>

30 Questions to Ask Yourself Before You Die {Via studioflowerpower on etsy} “Rather than money, than fame, than love…give me truth.” ~ Thoreau I woke up this morning and my life clock marked 30. My first sleep-deprived idea was to pack a small suitcase, get on the first train, move to another country, change my name, change my hair color (or get plastic surgery if needed), and start from scratch. By now, I’m good at both: fighting and disappearing. A true warrior doesn’t feel forced to do either, but moves through and with and for life, like water. So after I washed my face and considered the costs of running and those of fighting, I decided to do neither and have some juice instead. {Alkaline Espresso / Click for recipe.} We are a constant process, an event, we’re change. Our life is the house, the rest are just projections, shadows of the greater structure: even our deepest thoughts, beliefs, you, me and everything and everyone we’ve ever known, are subject to interpretation. Loving the questions means to love yourself. You. Comments

The Cube Game - Find Out The True Nature Of People In this video I am going to play with you The Cube game. This psychological game is from the book “Secrets of the Cube” . Watch the video, remember your answers and check the meanings of your imagined objects below. I forgot to ask one question about the cube. The Cube game answers: The Cube The first object in the desert, the cube, represents you. The bigger the cube, the bigger your ego. If the cube is made out of something solid and strong, it means that you are a strong person. How you think about the cube represents how you think about yourself. If the cube is in the centre it means that you like the attention and you like to be praised. The color of the cube represents your personality. Here is a general guide to the cube colors: Black is the color of authority, elegance, sophistication. White symbolizes innocence, non-judgemental personality, objectivity, lack of strong opinions. Red is the color of dominance, power, love and sexual energy. Brown shows stability. The Ladder The Horse

Internal Time: The Science of Chronotypes, Social Jet Lag, and Why You’re So Tired by Maria Popova Debunking the social stigma around late risers, or what Einstein has to do with teens’ risk for smoking. “Six hours’ sleep for a man, seven for a woman, and eight for a fool,” Napoleon famously prescribed. (He would have scoffed at Einstein, then, who was known to require ten hours of sleep for optimal performance.) This perceived superiority of those who can get by on less sleep isn’t just something Napoleon shared with dictators like Hitler and Stalin, it’s an enduring attitude woven into our social norms and expectations, from proverbs about early birds to the basic scheduling structure of education and the workplace. The distribution of midsleep in Central Europe. This myth that early risers are good people and that late risers are lazy has its reasons and merits in rural societies but becomes questionable in a modern 24/7 society. The scissors of sleep. Chronotypes vary with age: [T]he less stress smokers have, the easier it is for them to quit. (Thanks, Jalees.)

The Magic Formula for Expressing Hurt Feelings If we could all just be more emotionally honest with ourselves and others, the world would be a much different place. Sounds easy, right? Then why is it so hard?!? Well, being straightforward about your feelings is a challenge when you grow up in a culture that polarizes emotions as out to get you and paints them as the take-down of your logical, rational mind (which is an irrational fear). But no matter how dysfunctional your cultural programming is, you can still reprogram your beliefs about emotions and their role in your life. This formula is good for you You’ve probably already learned from elementary school about the easy way to express your feelings without putting anyone else on the defensive in a mean way. It’s a magic formula helps you put your feelings back into perspective by reminding you that: The formula is: I feel this when you do that. Or, for when you need to try extra hard to get the other person’s attention: When you do that, I feel this. Change the world with magic ShareThis

Top 10 Things That Determine Happiness photo: meddygarnet Happiness is, by nature, a subjective quality with a definition like a moving target. There is scant evidence — qualitative or quantitative — to lend convincing support to those life variables most critical in determining individual happiness, which is likely why past researchers committed to the scientific method rarely tried to tackle the subject. This is changing. Take, for example, the World Database of Happiness in Rotterdam, self-described as a, “continuous register of scientific research on subjective appreciation of life.” While we’re not entirely convinced of this marriage between science and subjectivity, we can still offer up a top 10 of things that determine human happiness, as supported by this growing body of research. No.10 – Having a short memory Are you one to hold grudges? No.9 – Exacting fairness No.8 – Having lots of friendships No.7 – Being spiritual No.6 – Thinking ahead No.5 – Developing a skill According to psychology professor Dr. No.2 – Good genes