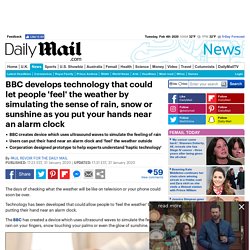 When prosthetics meet aesthetics. The future is now: how exoskeletons are changing Canada's construction industry. Encased in a metal exoskeleton, a construction worker looking like a robot wields a motorized chipper to remove tiles from a wall. 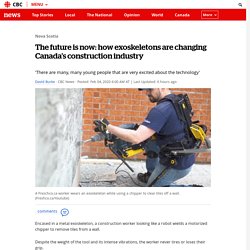 Despite the weight of the tool and its intense vibrations, the worker never tires or loses their grip. They are a new breed of construction worker in Canada, using wearable machinery to do work faster and with less fatigue. The hope is this technology will attract younger workers and allow older employees to stay on the job longer, which would benefit an industry facing a labour shortage. Like It or Not, “Smart Drugs” Are Coming to the Office. You’ve managed the same team for the past five years — then one day you find out that your most successful employee uses cognitive-enhancing drugs on the job. 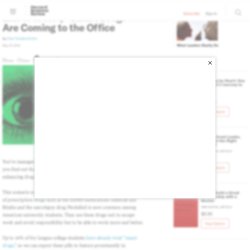 This scenario may not be hypothetical for long. The unauthorized use of prescription drugs such as the ADHD medications Adderall and Ritalin and the narcolepsy drug Modafinil is now common among American university students. They use these drugs not to escape work and avoid responsibility but to be able to work more and better.

Up to 20% of Ivy League college students have already tried “smart drugs,” so we can expect these pills to feature prominently in organizations (if they don’t already). The BBC's Haptic Weather Forecast Machine Lets You Feel the Weather. The BBC has cooked up a new way to deliver the weather forecast using haptic technology - although it's only an internal prototype right now, so don't get too excited. 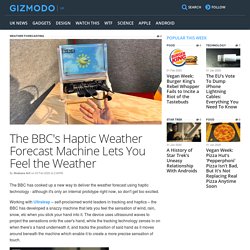 Working with Ultraleap – self-proclaimed world leaders in tracking and haptics – the BBC has developed a snazzy machine that lets you feel the sensation of wind, rain, snow, etc when you stick your hand into it. The device uses ultrasound waves to project the sensations onto the user's hand, while the tracking technology zeroes in on when there's a hand underneath it, and tracks the position of said hand as it moves around beneath the machine which enable it to create a more precise sensation of touch.

The device contains 256 small ultrasound speakers on its underside as well as hand tracker to pull off this feat, and is paired with "3D holographic type animated images" of weather forecast symbols to create a more immersive experience. Feature image credit: BBC. Magazine Strøm - Édition Automne / Hiver 2019-2020 by Strom spa nordique. 'I am going to say quiet words in your face just like I did with Trump': a conversation with the Zuckerbot. Mark Zuckerberg is press shy. 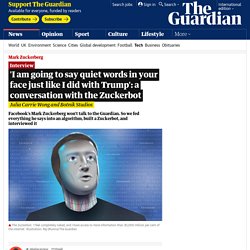 The 35-year-old billionaire’s innate sense of swagger (“I’m CEO … bitch”) has failed to translate into confident public speaking. YouTube’s Top Earner Is an 8-Year-Old Who Reviews Toys. Still scrambling to find gifts for your younger loved ones this holiday season? 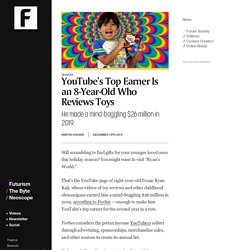 A guide to fighting lies, fake news, and chaos online. AA few months ago, I got angry about something on Twitter. 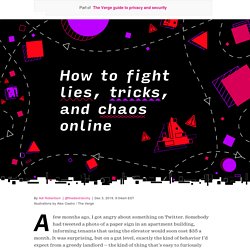 Somebody had tweeted a photo of a paper sign in an apartment building, informing tenants that using the elevator would soon cost $35 a month. It was surprising, but on a gut level, exactly the kind of behavior I’d expect from a greedy landlord — the kind of thing that’s easy to furiously retweet without thinking. Now the Machines Are Learning How to Smell. Dead North wants to make sure filmmakers respect Indigenous stories, cultures. Are you the right person to tell this story? 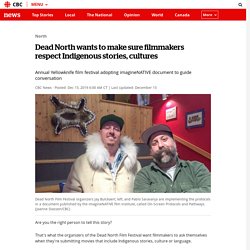 That's what the organizers of the Dead North Film Festival want filmmakers to ask themselves when they're submitting movies that include Indigenous stories, culture or language. The annual Yellowknife festival showcases short horror films from across the circumpolar North. The Perfect User. The Perfect User Digital wellness movements insist there is a single way to “stay human” Cherie Lacey; Catherine Caudwell; Alex Beattie September 05, 2019 share Image: Conversations by Siddhant Jaokar. 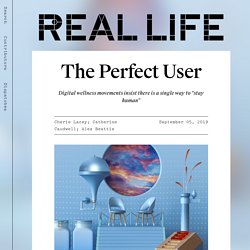 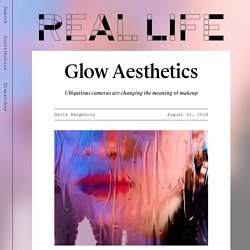 Opinion: the ‘power of where’ – realising the potential of geospatial data – Government & civil service news. Americans and their smart speakers: 5 findings about their views and habits. Smart speakers such as Amazon Echo or Google Home have gained popularity over the last several years, and consumer experts found that these devices were especially popular with holiday season gift buyers last year.

But even as some Americans are integrating these devices into their homes, many owners express concerns over data collection and personalization, according to a Pew Research Center survey conducted June 3-17, 2019. Here are five findings about Americans and smart speakers: 1Smart speaker ownership varies across demographic groups. Should you be polite to your smart speakers? Why many people say 'please' to Alexa. The five corrupt pillars of climate change denial.

The fossil fuel industry, political lobbyists, media moguls and individuals have spent the past 30 years sowing doubt about the reality of climate change - where none exists. The latest estimate is that the world’s five largest publicly-owned oil and gas companies spend about US$200 million a year on lobbying to control, delay or block binding climate policy.

Former Content Moderators Sue Facebook for Giving Them PTSD. As a content moderator for Facebook, it was literally Dublin resident Chris Gray’s job to watch child abuse, animal torture, and executions — disturbing imagery that left his mental health in shambles. I tried to glitch the simulation and all I got was a bottle of pee. Brownstein: You probably won’t see this doc streaming on Amazon. To build back trust, healthcare industry relies on micro-influencers. AI is moving too fast, and that's a good thing. The More We See Fake News, The Less Fake It Becomes. Freedom of religion widely valued in Canada, but the role of faith in modern society still a source of debate. Why the power of cute is colonising our world. New psychology research indicates that subtle exposure to religious words can increase benevolent sexism.

Monetizing reality: Tokyo firm paying people to be filmed at home in 'experiment' Is ‘devouring’ books a sign of superficiality in a reader? How science has shifted our sense of identity. Metaphors grow the mind and feed the soul. Don’t lose them. Can algorithms really teach kids to write better? AI grading student essays is trying. A New, More Rigorous Study Confirms: The More You Use Facebook, the Worse You Feel. L’humain agirait différemment dans la réalité virtuelle.

Fake news grabs our attention, produces false memories and appeals to our emotions. Thunder Bay: Local news is important for conversations on reconciliation. A little humour may help with climate change gloom. New study finds journalists score far lower in moral reasoning than they did 13 years ago. Facebook bows to Singapore's 'fake news' law with post 'correction' How Dreams Change Under Authoritarianism: Charlotte Beradt’s “The Third Reich of Dreams”

How Airbnb Is Silently Changing Himalayan Villages – Veridici. What do the terms ‘life’, ‘love’, ‘art’ and ‘god’ look like to an algorithm? How Hmong Americans turned a conference call line into a radio of their own. Let Juries Review Facebook Ads. Imagining both utopian and dystopian climate futures is crucial – which is why cli-fi is so important. This Is What Climate Change Sounds Like.

People Are Posting Their Genitals on Reddit to Get STI Diagnoses. Zmy012. ZME Science stance on communicating the climate crisis. 19 – Labels. Freedom of thought is under attack – here's how to save your mind. Many Americans Say Made-Up News Is a Critical Problem That Needs To Be Fixed. Fake news game confers psychological resistance against online misinformation.

Tech platforms are where public life is increasingly constructed, and their motivations are far from neutral. This game makes players better at spotting disinformation after just 15 minutes, study finds. #Fakenews is being used to discredit mainstream media coverage of the Canadian election. Facebook isn’t free speech, it’s algorithmic amplification optimized for outrage.