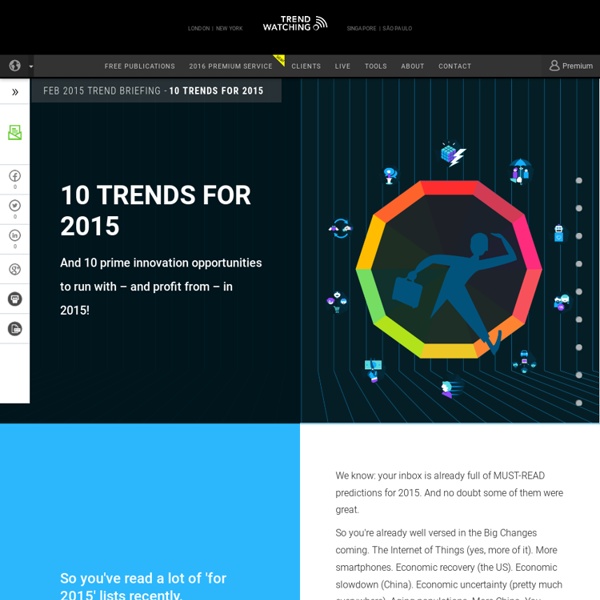 Jeff Bezos recently told shareholders that Amazon would have 10,000 Kiva robots by the end of 2014 (from just 1,400 in 2013), and that this could cut fulfillment costs for an average order by 20-40% (BCG, August 2014). And while lower costs will be central to the robot narrative told in boardrooms during 2015, smart business will be planning not just how robots might decrease their costs, but how they can also increase customer satisfaction, too. Draw inspiration from the examples below around how to use robots to initiate better customer service: more reliable, faster, richer, more personal, more convenient … the list goes on. Remember, this isn't about Man vs. Related:  Strategic Foresight: Learning from the Future

‘Situational Futuring’ and 44 Mind-Stretching Scenarios to Learn How to Use It Last week I got into a discussion with a friend about the concept of self-contained water. If you think in terms of picking up a bottle of water, only without the bottle, you get the picture. Rocks are self-contained, baseballs are self-contained, so why can’t we devise some way to make water self-contained? Yes, we have ice, but I’m referring to a more usable form of water. As an example, if water itself could be used to form a somewhat hardened skin around a small quantity of water, we could create 100% consumable water with zero waste. An industrial design team in London has come the closest with something called “Ooho,” a blob-like water container made out of an edible algae membrane. As we imagine our way through this design problem, many more questions come to light. Even a container made of water will get dirty, so how do we clean the dirt from the side of a solid water container? More importantly, what is the optimal size for a self-contained water container? Situational Futuring

Futures and Frame Games … 2 | neil houghton The future holds meaning for us. Some meanings are derived from the power the future has to affect us. The experience of this power may take many forms … from a feeling of pull or attraction; to a feeling of push or repulsion. Some meanings seem easy to grasp. Their familiarity is due to our background knowledge that is readily imported and accessed to make sense of the context and contents of situation arising. Other meanings can seem surprising, strange and very unfamiliar. We have a repertoire of practices that allow us to handle repetitions and differences. These two types of games are frame-games. The inner game is a game of uncovering, unlocking and unleashing rich inner meanings. Futures coaching enages in different frame-games involving the practice of non-meaning and the performance of meaning. The more … the more … pattern The more you are … reaching beyond the known to bring the future into the present, the more you are … bringing futures to life. Let the games begin! Neil.

New business models Report Summary Despite continued uncertain economic conditions, most companies remain persuaded that there is a strong causal link between their financial performance over a 5-10 year time horizon and their current commitment to improving their environmental, social and governance performance. Against this background, a number of business leaders are reviewing their approach to sustainability, weighing new corporate strategies and new business models in efforts to ensure their long-term sustainability. New business models for the 21st century is an Economist Intelligence Unit report, commissioned by Enel Foundation that discusses companies’ views on sustainability measures, the challenge of measuring and reporting sustainability outcomes, and the prospects of business models focussing on long-term sustainability. Why read this report Ernst Ligteringen, CEO, Global Reporting Initiative Contributors Published:October 13th 2014 Interviewed for this report:

How to see into the future Billions of dollars are spent on experts who claim they can forecast what’s around the corner, in business, finance and economics. Most of them get it wrong. Now a groundbreaking study has unlocked the secret: it IS possible to predict the future – and a new breed of ‘superforecasters’ knows how to do it ©Laurie Rollitt Irving Fisher was once the most famous economist in the world. In the 1920s, Fisher had two great rivals. Fisher’s rivals fared better than he did. If Fisher and Babson could see the modern forecasting industry, it would have astonished them in its scale, range and hyperactivity. It is true that forecasting now seems ubiquitous. Irving Fisher. Real breakthroughs have been achieved in certain areas, especially where rich datasets have become available – for example, weather forecasting, online retailing and supply-chain management. So why is forecasting so difficult – and is there hope for improvement? Tetlock’s response was patient, painstaking and quietly brilliant.

The Learning Myth: Why I'll Never Tell My Son He's Smart | Salman Khan My 5-year-­old son has just started reading. Every night, we lay on his bed and he reads a short book to me. Inevitably, he'll hit a word that he has trouble with: last night the word was "gratefully." Researchers have known for some time that the brain is like a muscle; that the more you use it the more it grows. However, not everyone realizes this. The good news is that mindsets can be taught; they're malleable. I really want to start a national conversation that examines how we as a society can help people develop a growth mindset. And now here's a surprise for you.

How the Internet of Things Changes Business Models - Gordon Hui by Gordon Hui | 12:00 PM July 29, 2014 As the Internet of Things (IoT) spreads, the implications for business model innovation are huge. Filling out well-known frameworks and streamlining established business models won’t be enough. To take advantage of new, cloud-based opportunities, today’s companies will need to fundamentally rethink their orthodoxies about value creation and value capture. Value creation, which involves performing activities that increase the value of a company’s offering and encourage customer willingness to pay, is the heart of any business model. In traditional product companies, creating value meant identifying enduring customer needs and manufacturing well-engineered solutions. But in a connected world, products are no longer one-and-done. Albert Shum, Partner Director of UX Design at Microsoft, notes: “Business models are about creating experiences of value. Options for control points also expand through the IoT.

Bubble Finance At Work: How The Share Repurchase Mania Is Gutting Growth And Leaving Financial Wrecks Like Radio Shack | David Stockman's Contra Corner Janet Yellen is a chatterbox of numbers, but most of them are “noise”. And that’s her term. Yet here is a profoundly important set of numbers that you haven’t heard boo about from Yellen and her mad money printers. To wit, during the “difficult” economic times since the financial crisis began gathering force in Q1 2008, the S&P 500 companies have distributed $3.8 trillion in stock buybacks and dividends out of just $4 trillion in cumulative net income. Self-evidently, the corporate form of business organization is designed such that some considerable portion of net earnings should be returned to their owners each year. Needless to say, that is the opposite of the “growth” and “escape velocity” story that currently excites stock market punters, and is wildly inconsistent with present capitalization rates in the stock market. But now we are off the races once again. Today it is in a liquidity crisis, with barely $60 million of available cash. By Eric Englund

Association of Professional Futurists - Nine Metaphors for a Futurist Initially this post was to be called 'Dress Code for Futurists'. After spending five years with futurists from over the world, I wanted to find out whether there was a particular way to dress for futurists. Doctors, plumbers, history teachers, clowns and other professions have their own dress code, whether it's prescribed or not. We futurists are privileged (or at least some are) to work with diverse groups of people. In my foresight master's program, we were often advised to "meet the system where it's at", i.e. to adapt ourselves to the context, organisation and people for which we do foresight work. Instead of exploring outer appearance such as clothes, I realised that I've actually been exploring this idea of general appearance in metaphors over the past year in my APF blog posts... So, in which forms and shapes can we futurists appear? 1. My interest in metaphors for futurists started with the Trickster - a character found in many myths. 2. The Clown is related to the Trickster.