Welcome to 2035...the Age of Surprise. From anticipation to action: an essential foresight path for businesses and organisations. Namur, February 1st, 2014. 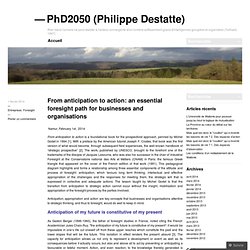 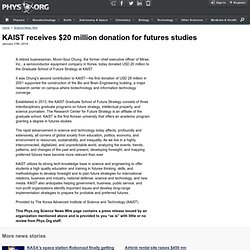 It was Chung's second contribution to KAIST—his first donation of USD 28 million in 2001 supported the construction of the Bio and Brain Engineering building, a major research center on campus where biotechnology and information technology converge. Established in 2013, the KAIST Graduate School of Future Strategy consists of three interdisciplinary graduate programs on future strategy, intellectual property, and science journalism. The Research Center for Future Strategy is an affiliate of the graduate school. KAIST is the first Korean university that offers an academic program granting a degree in futures studies.

Provided by The Korea Advanced Institute of Science and Technology (KAIST) Simple Answers. Stuart Candy Imagines Christchurch of the. What if Christchurch became NZ's capital? 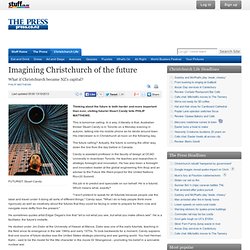 Last updated 05:00 13/10/2013 FUTURIST: Stuart Candy Thinking about the future is both harder and more important than ever, visiting futurist Stuart Candy tells PHILIP MATTHEWS. This is tomorrow calling. In a way, it literally is that. The future calling? Candy is assistant professor in the faculty of design at OCAD University in downtown Toronto.

Rising to the challenge of the 21st century: the role of futures research and practice. This short essay is adapted from a short piece I wrote during my time as Visiting Senior Research Fellow at the Lee Kuan Yew School of Public Policy at the National University of Singapore, for their publication Global-is-Asian. 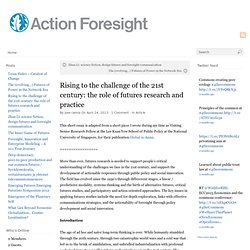 More than ever, futures research is needed to support people’s critical understanding of the challenges we face in the 21st century, and support the development of actionable responses through public policy and social innovation. The field has evolved since the 1950’s through differerent stages, a linear / predicticive modality, systems thinking and the birth of alternative futures, critical futures studies, and participatory and action oriented approaches. The key issues in applying futures studies include the need for depth exploration, links with effective communications strategies, and the actionability of foresight through policy development and social innovation. Introduction The age of ad hoc and naïve long-term thinking is over.

The Nine Kinds of Bad Futurists (NOT an exhaustive list) — Idea Sushi. “If you want a vision of the future, imagine a boot stamping on a human face – forever”. 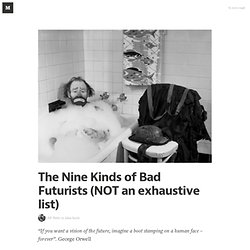 George Orwell I’m not that taken with futurists. 5 Unexpected Factors That Change How We Forecast The Future. When we think of "The Future," we have a tendency to think in terms of technologies. 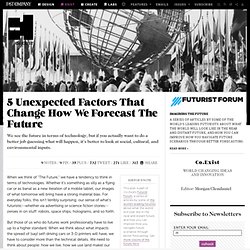 Whether it’s something as silly as a flying car or as banal as a new iteration of a mobile tablet, our images of what tomorrow will bring have a strong material bias. For everyday folks, this isn’t terribly surprising; our sense of what’s futuristic--whether via advertising or science fiction stories--zeroes in on stuff: robots, space ships, holograms, and so forth.

But those of us who do futures work professionally have to live up to a higher standard. How To Win At Forecasting. One thing that became very clear, especially after Gorbachev came to power and confounded the predictions of both liberals and conservatives, was that even though nobody predicted the direction that Gorbachev was taking the Soviet Union, virtually everybody after the fact had a compelling explanation for it. 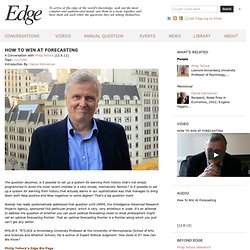 We seemed to be working in what one psychologist called an "outcome irrelevant learning situation. " People drew whatever lessons they wanted from history. There is quite a bit of skepticism about political punditry, but there's also a huge appetite for it. I was struck 30 years ago and I'm struck now by how little interest there is in holding political pundits who wield great influence accountable for predictions they make on important matters of public policy. Of Flying Cars and the Declining Rate of Profit. David Graeber [from The Baffler No. 19, 2012] A secret question hovers over us, a sense of disappointment, a broken promise we were given as children about what our adult world was supposed to be like. 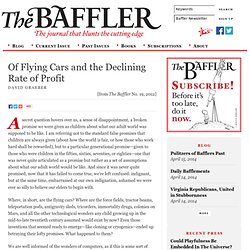 I am referring not to the standard false promises that children are always given (about how the world is fair, or how those who work hard shall be rewarded), but to a particular generational promise—given to those who were children in the fifties, sixties, seventies, or eighties—one that was never quite articulated as a promise but rather as a set of assumptions about what our adult world would be like. We might be living in the least disruptive age in history.

This is a guest post by Brian Millar, Strategy Director at strategy agency Sense Worldwide. 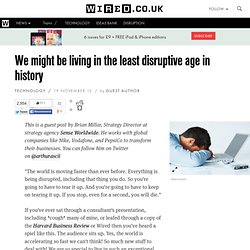 He works with global companies like Nike, Vodafone, and PepsiCo to transform their businesses. You can follow him on Twitter on @arthurascii. THE COUNT-UP TO 2052: AN OVERARCHING FRAMEWORK FOR ACTION. After the publication of the Korean, Chinese and Japanese language editions of “2052 – A Global Forecast for the Next Forty Years”, the author, Club of Rome Member Jorgen Randers, gave talks in China, Korea and Japan in June 2013. 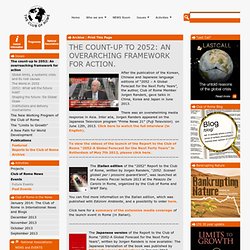 There was an overwhelming media response in Asia. Inter alia, Jorgen Randers appeared on the Japanese Television program “Prime News 21″ (Fuji Television) on June 12th, 2013. Click here to watch the full interview (in English). Explorers Journal - William Saturno: Maya Mural Find. At first glance the mound is nothing remarkable—just a pile of dirt and stone covered in trees and vegetation. It’s in the Guatemalan forest on the outskirts of the Classic Maya site of Xultún, near another site I’ve been studying for the past decade. Retro future News, Videos, Reviews and Gossip - io9. Why Change Happens: Ten Theories. Thinking About Futurism. William Gibson on aging futurism. You're So Predictable. Daniel Kahneman and the Science of Human Fallibility. I will never know if my vocation as a psychologist was a result of my early exposure to interesting gossip, or whether my interest in gossip was an indication of a budding vocation.

Like many other Jews, I suppose, I grew up in a world that consisted exclusively of people and words, and most of the words were about people. . . . the people my mother liked to talk about with her friends and with my father were fascinating in their complexity. Some people were better than others, but the best were far from perfect and no one was simply bad. – Daniel Kahneman, Autobiography Upon Winning the Nobel Prize In 2002, Psychologist Daniel Kahneman won the Nobel Prize for his work in Behavioral Economics.