How to Seize the Opportunities When Megatrends Collide 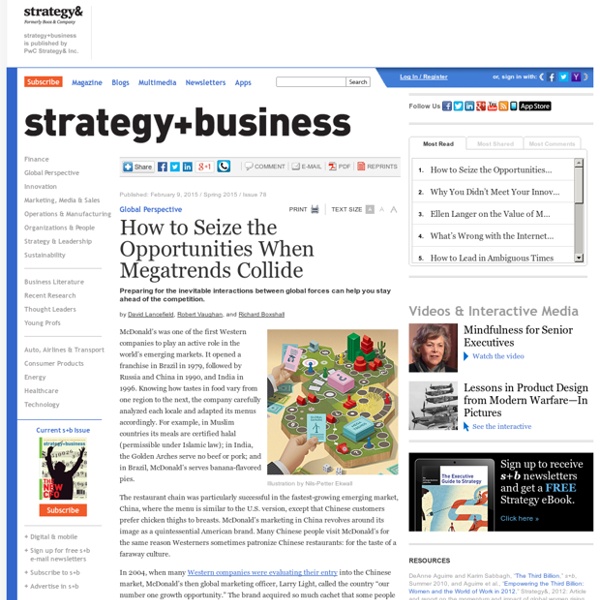 McDonald’s was one of the first Western companies to play an active role in the world’s emerging markets. It opened a franchise in Brazil in 1979, followed by Russia and China in 1990, and India in 1996. Knowing how tastes in food vary from one region to the next, the company carefully analyzed each locale and adapted its menus accordingly. For example, in Muslim countries its meals are certified halal (permissible under Islamic law); in India, the Golden Arches serve no beef or pork; and in Brazil, McDonald’s serves banana-flavored pies. The restaurant chain was particularly successful in the fastest-growing emerging market, China, where the menu is similar to the U.S. version, except that Chinese customers prefer chicken thighs to breasts. McDonald’s marketing in China revolves around its image as a quintessential American brand. What made McDonald’s persevere in China, and why did its U.S. The second megatrend involved cultural transformation stemming from demographic change. Related:  Water Scarcity • foresight

titled 20 February 2014 – The United Nations Food and Agriculture Organization (FAO) today warned that water scarcity is one of the most urgent food security issues facing countries of the Near East and North Africa, with fresh water availability in the region expected to drop by 50 per cent by 2050. FAO’s warning comes as ministers of agriculture and national officials prepare to tackle the issue at a meeting of the organization’s highest regional governing body beginning next Monday. Among the issues on the agenda for the 32nd FAO Regional Conference for the Near East and North Africa is a new Regional Water Scarcity Initiative, launched by FAO to support member countries in identifying strategies, policies and practices that promote sustainable solutions to water scarcity and related food security problems. Demographic trends are adding urgency to the issue, the agency stated.

Why Your Company Needs a Resident Futurist Being far-sighted about your strategy can help you prepare for the big global changes already unfolding. I’ve spent quite some time trying to understand the world of tomorrow – as far away as 2035. I’ll then be 66 years old and ready for retirement, which puts things into perspective - at least for me. This actually started during my university days more than 20 years ago, when I decided to attend a seminar about the aging population. It was this course which sparked my interest in forces larger than the industry-level trends normally captured by the traditional strategic tools used today (e.g. “Futuring” as a strategy tool One tool that I find useful in handling this is ‘futuring’, a systematic process for thinking about, imagining, and planning for the future. One technique Futurists apply is identifying mega-trends. While short-term trends may be important for certain companies, mega-trends are what will ultimately shape consumers’ future behaviour and needs. Five global mega-trends 1.

Water Scarcity: CDP Report Argues for Broad, Locally Relevant Strategies Increasingly dire news about the California drought prompts another look at the plea for broad water stewardship in CDP’s 2013 Global Water Report Moving beyond business as usual. The tactic commonly used by many companies, a blanket water use reduction goal, won’t prepare us for a water-stressed future. Instead, companies need water policies that are locally relevant, risk-sensitive, and far-reaching enough to address their business impacts, risks, and the very real threat that water scarcity can mean to business continuity. If there is a good side to the third consecutive year of drought in California, it is that many business leaders are finally taking water seriously. Local Solutions to a global issue As problematic as a severe drought affecting one of our nation’s agricultural centers is, we should also take the long view. Against a constant supply of water on our planet, experts predict global demand will increase by 55 percent between 2000 and 2050. How should companies proceed?

2015-SOF-ExecutiveSummary-English.pdf Limits to Growth was right. New research shows we're nearing collapse | Cathy Alexander and Graham Turner The 1972 book Limits to Growth, which predicted our civilisation would probably collapse some time this century, has been criticised as doomsday fantasy since it was published. Back in 2002, self-styled environmental expert Bjorn Lomborg consigned it to the “dustbin of history”. It doesn’t belong there. Limits to Growth was commissioned by a think tank called the Club of Rome. The task was very ambitious. The book’s central point, much criticised since, is that “the earth is finite” and the quest for unlimited growth in population, material goods etc would eventually lead to a crash. So were they right? The results show that the world is tracking pretty closely to the Limits to Growth “business-as-usual” scenario. These graphs show real-world data (first from the MIT work, then from our research), plotted in a solid line. As the MIT researchers explained in 1972, under the scenario, growing population and demands for material wealth would lead to more industrial output and pollution.

'Thirsty' Global Fracking Industry Puts Water, Environment, Communities at Risk Multinational oil and gas companies are moving into increasingly vulnerable countries in Latin America, Africa, and Asia where the ecosystems, communities, and authorities are even less able to cope with the impacts of fracking and shale gas extraction, according to a new report from Friends of the Earth Europe. The report, Fracking Frenzy: How the Fracking Industry is Threatening the Planet (pdf), shows how the pursuit of fracking in countries such as Mexico, China, Argentina, and South Africa is likely to exacerbate the climate, environment, social, and human rights problems those countries already face. While much has been written about fracking in the United States and the European Union, this study "seeks to provide a global overview of shale gas development in the rest of the world," its authors note, focusing specifically on 11 countries that are leaders in shale development on their respective continents.

125 Top Women Futurists & the End of Business as Usual Last week, we published a blog post on the Top 20 Future of Work thinkers and the companies that most connect to them. It included this quote: “What we think will take ten years will likely take two or less,” says Frank Diana, Principal in Business Evolution at the $80B IT services firm Tata Consultancy Services, in a recent blog post. “Therefore, our view of the future in the context of strategy and planning has to change. "Why Aren't There More Women Futurists?” Here at Little Bird, we believe that there’s fundamental business value in listening to and learning from the very best thinkers on any topic you’re considering. So we used our technology to build a list of 125 important women futurists online. One clear theme was consistent across each of the replies we received: thinking about the future cannot be limited to thinking about technology. How important is it that women futurists get their due in the public eye? Maree Conway’s not so sure. "What it is not: prediction.

Looking Ahead: The Best of 2015 Trends January 2015: The only constant in the 21st century is change.Geopolitical turbulence and technological advances will be just some of the factors shaping the year ahead. Creating a point of view about ongoing and future trends is increasingly important to thrive in an ever more complex and competitive world. In 2011, when we typed Trends for 2011 into Google on January 1st 2011 it gave us around 46 million results. As we typed Trends for 2015 in January 1st 2015 it gave us 579 million results. Looking ahead to the next year, and even further, here’s our annual round-up of where you can find some of the more interesting and useful trend forecasts and ideas for 2015. So let’s take a look. Global Trends/Macro Trends 10 Trends to Watch for 2015! Consumer Trends Trendwatching’s 10 Trends shaping consumerism for 2015: Another round-up of the key consumer trends to watch during the year ahead and beyond, with useful examples to generate inspiration and innovation. Economic Trends Retail Trends

South Asia running out of groundwater - SciDev.Net South Asia [NEW DELHI] India, Nepal, Bangladesh and Pakistan along with China account for nearly half of the world’s total groundwater use and these regions are expected to experience serious deficits, says the UN World Water Development Report (WWDR 2015), Water for a Sustainable World 2015 released ahead of World Water Day on 22 March. WWDR 2015 explains the complex relationship between access to water and economic development using India as an example. Between 1960 and 2000 India’s mechanised tube wells increased from one million to 19 million. India has 26 million groundwater structures; Bangladesh and Pakistan each have around 5 million. Food grain yields have more than tripled since 1950 alleviating poverty, but 54 per cent of India’s landmass in 2015 faces high to extremely high water stress due to unregulated water withdrawal and intensified farming, according to the World Resources Institute. Per capita water availability in South Asian countries has been falling between 1962—2012.

The 10 Best Sci-Fi Fantasy Novels of 2015 So Far | Flavorwire | Page 10 Generation ships, sentient forests, exploding moons — there has been no shortage of action, speculation, and mystery in the year’s best sci-fi and fantasy novels. These books are remarkable, too, for the way they brazenly combine tropes from many different genres. In several of these novels, for example, mythological, intellectual, and literary history combine in unfamiliar and enlightening ways. In others, the uncanny reigns and the human is decentered — whether we’re talking about a disturbing imaginary friend or a weaponized cat. Here are the best sci-fi and fantasy novels of the year so far. Aurora, Kim Stanley Robinson Call it an ark, a generation ship — whatever.