Mars settlement in California desert may train astronauts for Mars - Business Insider. Finland is making its online AI crash course free to the world. Last year, Finland launched a free online crash course in artificial intelligence with the aim of educating its citizens about the new technology. 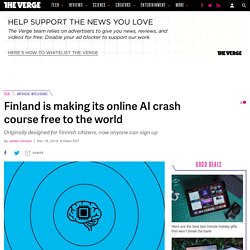 Now, as a Christmas present to the world, the European nation is making the six week program available for anyone to take. Strictly speaking, it’s a present for the European Union. The Age of Instagram Face. Within a few seconds, my face was shaped to match the Snapchat photo. 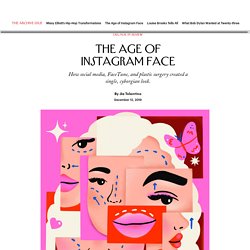 He took another picture of me, in profile, and FaceTuned the chin again. I had a heart-shaped face, and visible cheekbones. All of this was achievable, he said, with chin filler, cheek filler, and perhaps an ultrasound procedure that would dissolve the fat in the lower half of my cheeks—or we could use Botox to paralyze and shrink my masseter muscles. I asked the doctor what he told people who came to see him wanting to look like his best-known patients. A little humour may help with climate change gloom. This year, three studies showed that humour is useful for engaging the public about climate change. 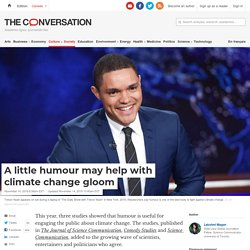 The studies, published in The Journal of Science Communication, Comedy Studies and Science Communication, added to the growing wave of scientists, entertainers and politicians who agree. In March 2017, the American Psychological Association published a report defining ecoanxiety as “chronic fear of environmental doom.” The report referred to literature that described an increase in depression and anxiety caused by peoples’ “inability to feel like they are making a difference in stopping climate change.” With psychological stakes this high, humour may seem inappropriate. But Phil McCordic — a Canadian actor, writer and producer of children’s programming and the host of TVOntario’s Science Max educational series — thinks it could be a way to access “the attention of a lot of people you wouldn’t have otherwise.”

Climate comedy has wide-ranging applications “Science should be serious! Esports need new protocols in sports medicine, say researchers. Across the U.S. the esports athlete is a rising class of competitor in the highest collegiate and professional arenas. 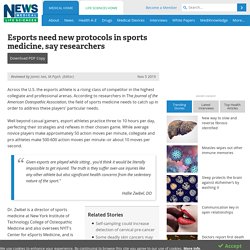 According to researchers in The Journal of the American Osteopathic Association, the field of sports medicine needs to catch up in order to address these players' particular needs. Well beyond casual gamers, esport athletes practice three to 10 hours per day, perfecting their strategies and reflexes in their chosen game. While average novice players make approximately 50 action moves per minute, collegiate and pro athletes make 500-600 action moves per minute--or about 10 moves per second. Given esports are played while sitting , you'd think it would be literally impossible to get injured. The truth is they suffer over-use injuries like any other athlete but also significant health concerns from the sedentary nature of the sport. " Dr. Esports is the future of all sports – here's why. The future of all sports is esports. 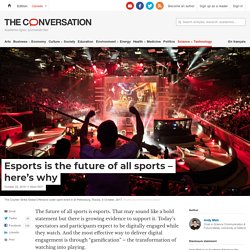 This Biological Battery Inspired By Electric Eels Could Soon Power Your Pacemaker. Sometimes used by aquariums and zoos to light Christmas trees, electric eels are teaching scientists how to create bio-batteries that can keep your implantable medical devices functioning forever (well, almost) Did you know there is an animal out there that can generate enough electricity to light up a Christmas tree? 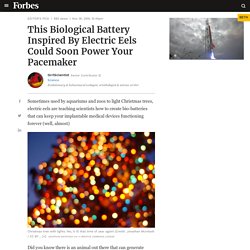 This amazing animal is a South American knifefish, popularly known as the electric eel. This Company Is Paying People $1,830 to Film Them Constantly. If automation takes off the way some predict it will, a whole lot of people are going to find themselves unemployed in the future. 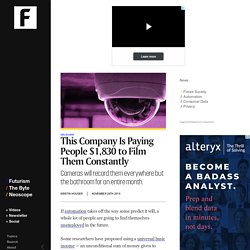 Some researchers have proposed using a universal basic income — an unconditional sum of money given to every member of a society — to ensure those folks can still afford to buy the things they need to live. Sac State embraces 'maker movement' with upcoming program. A new certificate program in maker education at Sacramento State will utilize a maker space planned for the University Library. 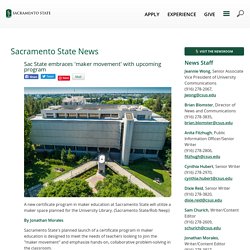 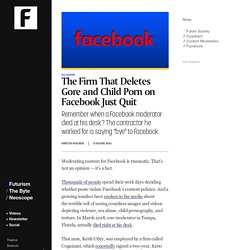 That’s not an opinion — it’s a fact. Thousands of people spend their work days deciding whether posts violate Facebook’s content policies. And a growing number have spoken to the media about the terrible toll of seeing countless images and videos depicting violence, sex abuse, child pornography, and torture. In March 2018, one moderator in Tampa, Florida, actually died right at his desk. FINAL Camylle Lanteigne Social Robots and Empathy The Harmful Effects of Always Getting What We Want. Emerging technology prompts debate in Canadian funeral industry. A 142-kilogram pig has been thrust into the middle of a contentious debate in the funeral industry, and the unusual development could end up reshaping how the sector is regulated in Ontario, and across the country. 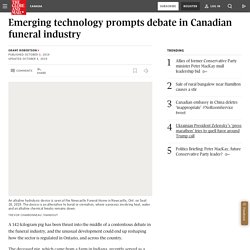 The deceased pig, which came from a farm in Indiana, recently served as a surrogate for a human corpse in a lab experiment designed to determine if an emerging technology known as low-temperature alkaline hydrolysis is a threat to public health. The procedure, which is offered as an alternative to cremation, and uses heat, water, pressure and potassium hydroxide to accelerate natural decomposition. The result, which proponents argue is less costly and more environmentally friendly because it dissolves a body rather than burning it, leaves an end product similar to ashes.

Mr. Charbonneau turned to the Indiana University Department of Pathology and Laboratory Medicine to conduct a peer-reviewed study. Why Mattel Is Releasing the First Gender-Neutral Doll. How one startup is using AI and VR to help drug addicts. You are in a black sedan parked in a dimly-lit alley at night. In the passenger seat a female, dressed in white top and jeans, asks if you want to share some meth.

She lights up and smoke fills the interior. Shame Plane. Future - Why ‘flight shame’ is making people swap planes for trains. Last month I stepped into an aeroplane for the first time in five years. I was leaving my home in London and taking a flight across the Atlantic to join my partner in Costa Rica. How Family Breakfasts Became the New Family Dinner. New Law Lets Students Miss School For “Mental Health Days” Youth suicides are currently the highest on record in the United States, a devastating indication that the nation isn’t doing enough to identify and address mental illness in its young people.

The situation is particularly bleak in Oregon, where youth suicide rates are higher than the national average — and where 16 percent of eighth grade students say they’ve seriously contemplated killing themselves in the past year. To help, a group of teen activists successfully lobbied Oregon’s government to pass a law expanding the reasons a student can be excused from school to include “mental health days” — a move that could simultaneously help struggling students while also serving to destigmatize mental illness. Prior to the passage of the new law, Oregon only granted students an excused absence if they missed class because they were physically ill — coping with a cold or a broken bone, for example.

“Why should we encourage lying to our parents and teachers?” Hardcastle asked the AP. Code of Conscience. How Blockchain Will Change Construction. Executive Summary Blockchain’s power to record, enable, and secure huge numbers and varieties of transactions raises an intriguing question: Can it enable the better execution of strategic projects in a conservative sector like construction, which involves large teams of contractors and subcontractors and an abundance of building codes, safety regulations, and standards? Engrained practices in the sector will likely prolong widespread blockchain adoption. But over time, blockchain will have breakthrough applications for project management. The authors encourage organizations to explore and capitalize on this potential.

Blockchain technology is among the most disruptive forces of the past decade. “Increasingly, we are thinking more carefully about when and where we need to compete and what can we share and collaborate on,” said David Bowcott, global director of growth, innovation, and insight in Aon’s global construction and infrastructure group. Overcoming Cultural Obstacles. Why We Should Teach Kids to Call the Robot ‘It’ If you want your preschooler to grow up with a healthy attitude toward artificial intelligence, here’s a tip: Don’t call that cute talking robot “he” or “she.” Today’s small children, aka Generation Alpha, are the first to grow up with robots as peers.

Those winsome talking devices spawned by a booming education-tech industry can speed children’s learning, but they also can be confusing to them, research shows. Many children think robots are smarter than humans or imbue them with magical powers. The long-term consequences of growing up surrounded by AI-driven devices won’t be clear for a while. But an expanding body of research is lending new impetus to efforts to expand technology education beyond learning to code, to understanding how AI works.