» Listen to the Radio Show Archive Alex Jones. Simon Peter versus Simon the Sorcerer. Lindsey Williams. The Difference between Aliens, Demons and Fallen Angels. A Different Take on the Ridesharing Rules. Wikimedia I can certainly understand the rage that the Seattle Council inspired by threatening to severely restrict, if not strangle altogether, a ridesharing option that many people find valuable. 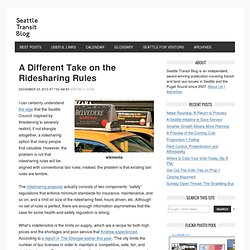 However, the problem is not that ridesharing rules will be aligned with conventional taxi rules; instead, the problem is that existing taxi rules are terrible. The ridesharing proposal actually consists of two components: “safety” regulations that enforce minimum standards for insurance, maintenance, and so on; and a limit on size of the ridesharing fleet, hours driven, etc. Although no set of rules is perfect, there are enough information asymmetries that the case for some health-and-safety regulation is strong. SmartTaxi – mobile and internet services for taxi and private hire companies. Claim Forms. » States Move to Tax Miles Driven With Black Boxes In Cars Alex Jones. Former U.S. 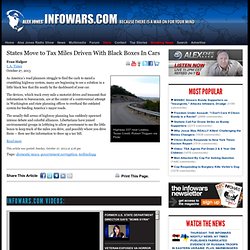 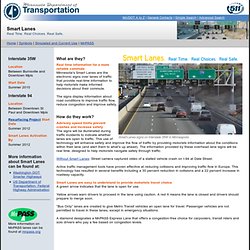 The signs display information about road conditions to improve traffic flow, reduce congestion and improve safety. HOV Smart Pass. History of the bus bike rack. DOT - Bike Smart. A Closer Look at Smart's Award-Winning Electric Bike. © Mairi Beautyman It's big news when a leader in the sustainable transportation market goes all out on an electric bike: Meet the Smart ebike, which Mike brought to our attention last month in the article Smart's Award-Winning Electric Bike is Coming to the United States. 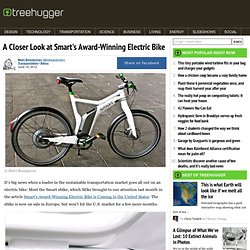 Car-free cities: an idea with legs. Car-free neighbourhoods are no unrealistic utopia – they exist all over Europe by Steve Melia A quarter of households in Britain – more in the larger cities, and a majority in some inner cities – live without a car. 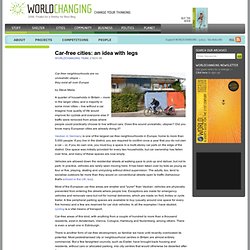 Imagine how quality of life would improve for cyclists and everyone else if traffic were removed from areas where people could practically choose to live without cars. Does this sound unrealistic, utopian? Did you know many European cities are already doing it? Vauban in Germany is one of the largest car-free neighbourhoods in Europe, home to more than 5,000 people. Vehicles are allowed down the residential streets at walking pace to pick up and deliver, but not to park. Adventure Cycling Association. We're building the largest official cycling route network in the world. 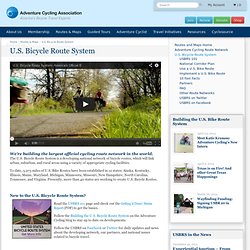 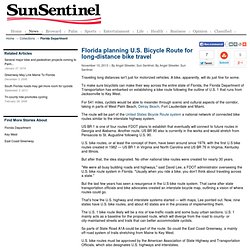 A bike, apparently, will do just fine for some. To make sure bicyclists can make their way across the entire state of Florida, the Florida Department of Transportation has embarked on establishing a bike route following the outline of U.S. 1 that runs from Jacksonville to Key West. For 541 miles, cyclists would be able to meander through scenic and cultural aspects of the corridor, taking in parts of West Palm Beach, Delray Beach, Fort Lauderdale and Miami. The route will be part of the United States Bicycle Route system a national network of connected bike routes similar to the interstate highway system. US BR 1 is one of four routes FDOT plans to establish that eventually will connect to future routes in Georgia and Alabama. Moving Goods by Bicycle. According to Cyclelogistics, there's an incredible potential to use bicycles instead of motorized vehicles to transport goods. 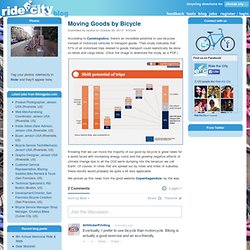 Their study indicates that 51% of all motorised trips related to goods transport could realistically be done on bikes and cargo bikes. (Click the image to download the study as a PDF.) David Byrne’s Perfect City. When are the SMART bike paths coming? SMART officials have hired a design-build contractor for the next round of construction on the new rail transit system, including 3.25 miles of bike pathway alongside the track. 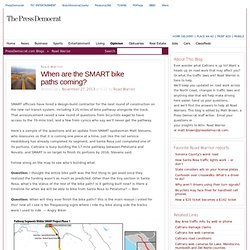 That announcement raised a new round of questions from bicyclists eager to have access to the 70-mile trail, and a few from cynics who say we’ll never get the pathway. Here’s a sample of the questions and an update from SMART spokesman Matt Stevens, who reassures us that it is coming one piece at a time, just like the rail service. Shared lane marking. A shared-lane marking or sharrow[1] is a street marking installed at locations in Australia, Canada, and the United States. 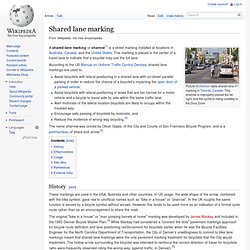 This marking is placed in the center of a travel lane to indicate that a bicyclist may use the full lane. According to the US Manual on Uniform Traffic Control Devices, shared-lane markings are used to: Assist bicyclists with lateral positioning in a shared lane with on-street parallel parking in order to reduce the chance of a bicyclist’s impacting the open door of a parked vehicle;Assist bicyclists with lateral positioning in lanes that are too narrow for a motor vehicle and a bicycle to travel side by side within the same traffic lane;Alert motorists of the lateral location bicyclists are likely to occupy within the traveled way;Encourage safe passing of bicyclists by motorists; andReduce the incidence of wrong-way bicycling.[2] History[edit] The Bicycle Diaries: My 21,000-Mile Ride for the Climate by David Kroodsma.

“This is the kind of adventure we need more of—someone actually taking what they know and carrying it out to the people who need to hear it. Pedaling a bike, and peddling the truth about the most important issue of our time.” —Bill McKibben, author, The End of Nature “When scientist David Kroodsma talks about global warming, people listen—because he’s on a bike.” —Bicycling Magazine. Seattle Critical Mass Needs to End: Seattlest: Seattle News, Food, Arts & Events.

For the record, this Seattlest is a daily bike commuter who knows and appreciates the rights and responsibilities of biking in an urban environment. We also have a friend who was beaten by cops a couple years ago during a Critical Mass demonstration. SMART - The world's first smart cycling helmet. Kickstarter: Keyless Bicycle Smart Lock System by LOCK8. What's wrong with bicycle helmets? By Michael Bluejay • Last update: June 2013. Apple's "Smart Bike" Could Squash All Other Bike Tech. Smart Bike Wheel Takes The Sweat Out Of Your Bike Commute. Streetsblog New York City. Times-up.org. Www.smart.com. Introduction to How the Smart Car Works" ­With gas prices at historic highs in the United States and fuel-efficient cars in vogue, the time might be perfect for DaimlerChrysler to introduce the Smart Car to U.S. markets. Already popular in Europe, the Smart Car is small in stature but big on economy.

Passenger train and multi-use pathway project. Overview. Queue jump. I Am Robot Boss. I roll out of my office and immediately crash into a box. Across the hall, three colleagues in a group stop talking and turn to watch me. I feel intensely self-conscious. ClimateSmart. November 10, 2011. Climate-Smart Conservation. The World's Best Travel Mobility Scooter. Federal Railroad Administration. The primary mission of the Risk Reduction Program Division is ensuring the safety of the nation’s railroads by evaluating safety risks and managing those risks in order to reduce the numbers and rates of accidents, incidents, injuries and fatalities. Moving Beyond the Automobile. Cross boarder enforcement is coming « FEVR.