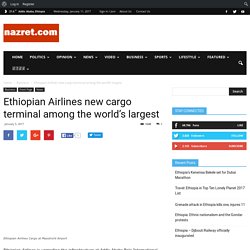 Nearing completion is a widebody maintenance hangar and a new cargo terminal, Ethiopian said in a statement. The maintenance hangar, which is 97% complete, has two bays for paint and maintenance. It can accommodate two Boeing 747-8s at a time, or more of other aircraft types. A new cargo terminal, which is 82% complete, is expected to open around April 2017. Berbera port ready for Ethiopian container traffic in 16 months: Somaliland FM - Geeska Afrika Online. Fly non-stop to Addis Ababa from Stockholm Arlanda.

The FINANCIAL -- Ethiopian Airlines is revising its air traffic schedule to Scandinavia and will begin flying non-stop from Addis Ababa to Stockholm Arlanda Airport using a Boeing 787-8 Dreamliner. 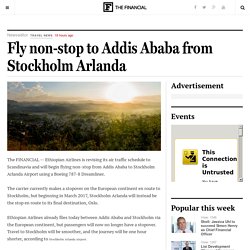 The carrier currently makes a stopover on the European continent en route to Stockholm, but beginning in March 2017, Stockholm Arlanda will instead be the stop en route to its final destination, Oslo. Ethiopian Airlines already flies today between Addis Ababa and Stockholm via the European continent, but passengers will now no longer have a stopover. Travel to Stockholm will be smoother, and the journey will be one hour shorter, according to Stockholm Arlanda Airport. The combination of sun and safari attracts many Swedes to Africa, with places such as Zanzibar, Kilimanjaro and several cities in South Africa among the 54 destinations included in Ethiopian Airlines’ service to Africa. Ethiopia's double-digit ASK growth shows no signs of stopping. Ethiopia’s #1 airline is unsurprisingly the national carrier Ethiopian Airlines. 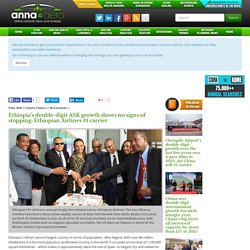 The Star Alliance member launched a three times weekly service to New York Newark from Addis Ababa (via Lomé), its third US destination in July. As all of its US services are flown via an intermediate point, with Washington Dulles and Los Angeles operated via Dublin, the US does not feature in terms of the African nation’s top country markets.

Ethiopia is Africa’s second largest country in terms of population, after Nigeria. With over 86 million inhabitants it is the most-populous landlocked country in the world. Addis Ababa welcomes new meter-run taxi services. BusinessGhana - Ghana, Business Advice, Jobs, News, Business Directory, Real Estate, Finance, Forms, Auto. Ethiopian Airlines ready to partner airlines on the Continent News Date: 11th July 2016 Ethiopian Airlines, the largest and most profitable airline in Africa, says it is ready to partner any international and domestic airline on the continent. 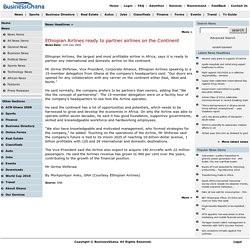 Improved access for Ethiopia: opening the Addis Ababa-Djibouti line. In 2015, during the first ever visit of a US president to Ethiopia, Barak Obama described Africa as the continent with the greatest potential to become "the next center of global economic growth". 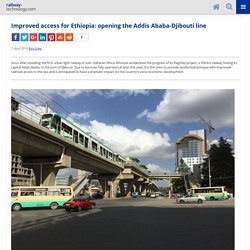 Only two months later, Ethiopia unveiled the first phase of its $475m Addis Ababa Light Rail, the first electrified light rail transit system to open in sub-Saharan Africa. The momentous launch however came at a time when Ethiopia is battling its worst drought in half a century. The drought, brought about by the El Nino phenomenon in June 2015, has caused widespread famine, wreaking havoc across the nation of 96 million, where the population still relies predominantly on agriculture. The deepening crisis prompted fears of "history repeating itself", recalling the devastating famine that hit Ethiopia during the 1970s and 80s. Addis Ababa - Djibouti Line: an exciting development. Ethiopian Airlines to Start Double Flights Daily to Delhi. Ethiopian Airlines announced that it would start daily flights twice a day to Delhi as of March 26, 2016, Fana Broadcasting Corporate reported. 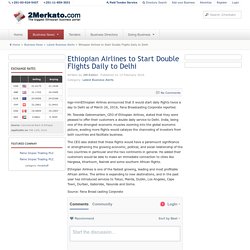 Mr. Tewolde Gebremariam, CEO of Ethiopian Airlines, stated that they were pleased to offer their customers a double daily service to Delhi. India, being one of the strongest economic muscles zooming into the global economic picture, availing more flights would catalyze the channeling of investors from both countries and facilitate business. The CEO also stated that these flights would have a paramount significance in strengthening the growing economic, political, and social relationship of the two countries in particular and the two continents in general.

He added their customers would be able to make an immediate connection to cities like Hargiesa, Khartoum, Nairobi and some southern African flights. Ethiopian Launches Non-stop Flights from Addis to ‪‎SaoPaulo‬ Addis Ababa (HAN) May 14,2015 Regional Investment News. 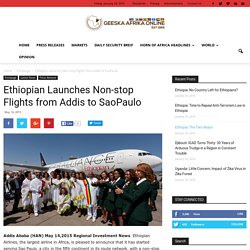 Ethiopian Airlines, the largest airline in Africa, is pleased to announce that it has started serving Sao Paulo, a city in the fifth continent in its route network, with a non-stop flight from Addis Ababa since April 25, 2015. Ethiopian tri-weekly flights to Brazil are operated using the ultra-modern Boeing 787 from the major hub in Addis Ababa. The start of this non-stop service to Sao Paulo reduces transit stops for customers traveling from the rest of Ethiopian destinations. Brazil is the largest national economy in South America and the eight in the world.

Ethiopia Plans A $4B Mega Airport, Wants To be One Of Africa's Biggest Hubs. Only the Grand Ethiopian Renaissance Dam, price tag $4.8 billion, will cost more than the country’s latest project — a new $4 billion mega airport that Ethiopia hopes will boost tourism and the economy, FTNNews reports. 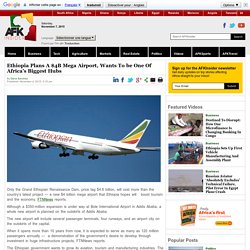 Although a $350-million expansion is under way at Bole International Airport in Addis Ababa, a whole new airport is planned on the outskirts of Addis Ababa. The new airport will include several passenger terminals, four runways, and an airport city on the outskirts of the capital. When it opens more than 10 years from now, it is expected to serve as many as 120 million passengers annually — a demonstration of the government’s desire to develop through investment in huge infrastructure projects, FTNNews reports. The Ethiopian government wants to grow its aviation, tourism and manufacturing industries. Ethiopian Railway Corporation takes delivery of 315 trains - Footprint to Africa. The Ethiopian Railway Corporation has taken delivery of 315 locomotives that carry passengers and freight along the Ethio-Djibouti railway. 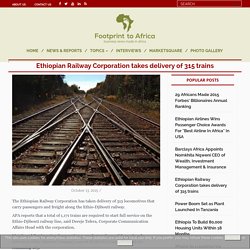 APA reports that a total of 1,171 trains are required to start full service on the Ethio-Djibouti railway line, said Dereje Tefera, Corporate Communication Affairs Head with the corporation. Metals and Engineering Corporation manufactured 130 of those already delivered while Chinese Company named NORINCO manufactured the remaining 185. The project, which is being built in two directions – Sebeta-Measo, Measo-Diredawa-Dawele- is expected to be finalized in the end of October. Two Chinese companies, China Railway Group (CREC) and China Civil Engineering Construction Corporation (CCECC) are handling the project. Ethiopian Airlines targets China with Chinese crew. Africa’s flourishing Ethiopian Airlines is clear — the future lies with China and it plans to hit home that point by putting Chinese crew members on all flights to China as of next month. 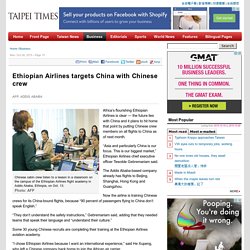 “Asia and particularly China is our focus. This is our biggest market,” Ethiopian Airlines chief executive officer Tewolde Gebremariam said. The Addis Ababa-based company already has flights to Beijing, Shanghai, Hong Kong and Guangzhou. Now the airline is training Chinese crews for its China-bound flights, because “90 percent of passengers flying to China don’t speak English.” “They don’t understand the safety instructions,” Gebremariam said, adding that they needed teams that speak their language and “understand their culture.” Some 30 young Chinese recruits are completing their training at the Ethiopian Airlines aviation academy. “I chose Ethiopian Airlines because I want an international experience,” said He Xupeng, who left a Chinese company back home to join the African air carrier. Ethiopian Airlines orders six more Boeing Dreamliners - Business and Finance. Ethiopian Airlines has ordered six more Boeing 787-8 Dreamliner jets, bringing the total in its fleet to 19.

The deal was announced jointly with Boeing, the US manufacturer, at the Paris Air Show on Wednesday. Boeing has received close to 100 aircraft orders at the show. The order is part of Ethiopian Airlines' long-term strategy to increase capacity and provide greater route flexibility to and from its hub in Addis Ababa. "In line with our Vision 2025 strategic road map and our fleet modernization and expansion project, we will keep investing heavily in technologically advanced and modern airplanes," said Tewolde GebreMariam, CEO of Ethiopian Airlines. "This new addition to our fleet will not only benefit Ethiopian because of its unmatched operating costs, but will also help us to enhance overall travel experience of our customers. The 787 is a family of technologically advanced, super-efficient airplanes with new passenger-pleasing features. Ethiopian Launches Non-stop Flights from Addis to Sao Paulo.

Press Release – Ethiopia Acquires Nine Ships for Export Trade. Facebook. Ethiopia Launches Pre-Service Testing For The Light Rail System. Google. Facebook. Ethiopia Distributes Its Cargo Among Neighbouring Countries' Ports. By Brook Abdu Fortune In the wake of Ethiopia issuing bonds, it has come to the realization that it may need alternative ports aside that of Djibouti. Ethiopia is to start using the Port of Berbera this month on an agreement reached between the two countries on January 29, 2015, while the use of Port Sudan has started by the importation of 50,000tn of fertilizer.

Ethiopia had expressed its dependence on Port Djibouti as a concern when it issued a one billion dollar sovereign bond in October 2014. The move towards issuing the bond came after Ethiopia got a ranking of B+ by foreign rating companies namely, Moody's, S&P and Fitch. The Reporter - English Edition - Ethiopia, South Sudan to establish new airline. The management of Ethiopian Airlines is finalizing negotiations with the Government of South Sudan to establish a new regional airline in Juba, which will serve as a flag carrier for the newly-born African nation.

Ethiopian Airlines will hold a 49 percent stake on the new start-up airline while the Government of South Sudan will own the majority 51 percent share. A senior official of Ethiopian told The Reporter that they started the negotiation early this year and hope to finalize and sign the deal next month. At the initial stage the start-up airline will operate scheduled domestic flights in South Sudan and regional flights to neighboring countries, including Ethiopia, Kenya and Uganda.