The Angolan government has announced that it is to invest around $3.9 billion in building 44 logistics platforms under the implementation of its National Network of Logistic Platforms (NNLP) project. 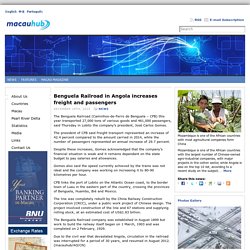 The president of CFB said freight transport represented an increase of 42.4 percent compared to the amount carried in 2014, while the number of passengers represented an annual increase of 29.7 percent. Despite these increases, Gomes acknowledged that the company’s financial situation is weak and it remains dependant on the state budget to pay salaries and allowances. Gomes also said the speed currently achieved by the trains was not ideal and the company was working on increasing it to 80-90 kilometres per hour. 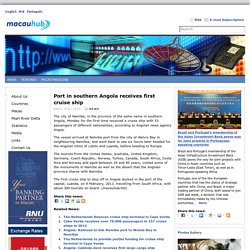 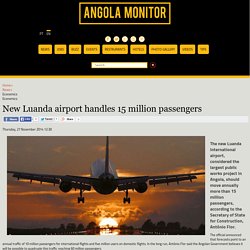 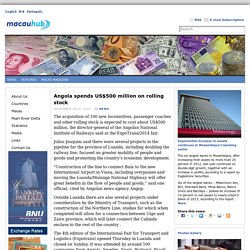 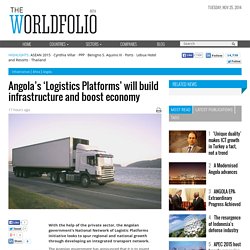 The Angolan government has announced that it is to invest around $3.9 billion in building 44 logistics platforms under the implementation of its National Network of Logistic Platforms (NNLP) project. Angola - Augusto Da Silva Tomas, Minister of Transport. The ports, which sit on the South Atlantic Ocean, not only serve Angola’s 19 million people but also act as a gateway to the rest of sub-Saharan Africa With 95% of international trade and importations transiting through ports, it’s no surprise that Angola, a country that is predicted to enjoy one of the highest economic growth rates over the next decade, is pinning a big importance and investing heavily in continued development of its port infrastructure. 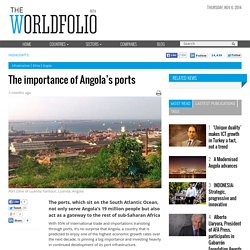 As Africa’s biggest oil producer after Nigeria, significant investment has already been made into developing Angola’s ports to ensure crude oil, which accounts for 85% of its $131.8 billion GDP, is smoothly and quickly exported to countries including China, the United States and India. Angola Magazine - Bié - Inauguradas 3 estações intermédias e 4 apeadeiros. Distribuição e Logística em Angola.pdf. Angola to speed up unloading by 80pc. Angola’s main port installed new cranes and provided more training to reduce its cargo unloading time by 80 percent as the government reviews a plan to build Africa’s biggest shipping terminal. 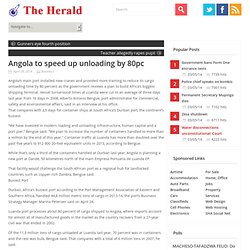 Vessel turnaround times at Luanda were cut to an average of three days last year from 16 days in 2008, Alberto Antonio Bengue, port administrator for commercial, safety and environmental affairs, said in an interview at his office. That compares with 2,5 days for container ships at South Africa’s Durban port, the continent’s busiest. “We have invested in modern loading and unloading infrastructure, human capital and a port pier,” Bengue said. Waiting time at port of Luanda reduced to three days. April 28th, 2014 News Two new cranes have been installed at the port of Luanda, Angola’s most important port, which has reduced the waiting time for ships by around 80 percent to three days, said the Luanda Port Company’s commercial, safety and environmental director. 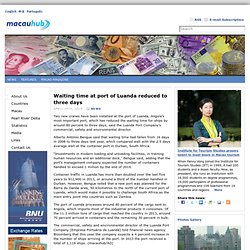 Alberto António Bengue said that waiting time had fallen from 16 days in 2008 to three days last year, which compared well with the 2.5 days average wait at the container port in Durban, South Africa. Over 100 railway stations inaugurated in 2013. The information is contained in a report on the activity carried out by the Transport Ministry in 2013 that also indicates the locations of the railway stations. 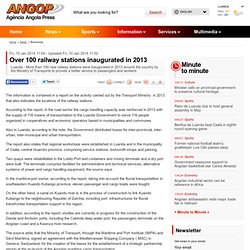 According to the report, in the road sector the cargo handling capacity was reinforced in 2013 with the supply of 116 means of transportation to the Luanda Government to serve 116 people organised in cooperatives and economic operators based in municipalities and communes. Also in Luanda, according to the note, the Government distributed buses for inter-provincial, inter-urban, inter-municipal and urban transportation.

The report also states that regional workshops were established in Luanda and in the municipality of Caála, central Huambo province, comprising service stations, locksmith shops and parking. Two quays were rehabilitated in the Lobito Port and containers and mining terminals and a dry port were built. Luanda port records 13 million tons in 2013. Port of Caio - Port of Caio. Over 100 railway stations inaugurated in 2013. Angola’s foreign reserves total over US$34 billion. River channel in Angola to link the provinces of Cunene and Kuando Kubango. Angolan distribution group opens first commercial space. 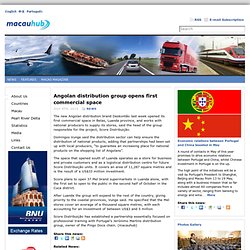 Domingos Vunge said the distribution sector can help ensure the distribution of national products, adding that partnerships had been set up with local producers, “to guarantee an increasing place for national products on the shopping list of Angolans”. The space that opened south of Luanda operates as a store for business and private customers and as a logistical distribution centre for future Score Distribuição units. It covers an area of 11,287 square metres and is the result of a US$33 million investment. Angola Magazine - Instituto Superior de Gestão logistica e transporte. Economics - Luanda to get three railways for public transport. Angola to Revive Luanda Port’s Freight Trains This Month. The transport of cargo by rail in Angola, Africa’s second largest oil producer, will begin this month from the port of Luanda for the first time in two decades.

The target is to move 615,000 metric tons a year, Isaac Mateus, Commercial Director at Caminho de Ferro de Luanda E.P, said in an interview on Feb. 27. Cargo will move along the refurbished line from the capital to the city of Malange, about 250 kilometers (155 miles) inland, and from the Boa Vista cargo terminal ear the port to Viana, a town 26 kilometers to the east with a special economic zone to encourage industry, he said. Documento final 2 - Distribuição e Logística em Angola.pdf. Angola to buy 100 locomotives from US group General Electric. February 19th, 2013 News US group General Electric (GE) is due to supply Angola with 100 locomotives and technical assistance, including for the engines of aircraft owned by Angolan airline Taag manufactured by the group, under the terms of a contract signed last week in Lobito.