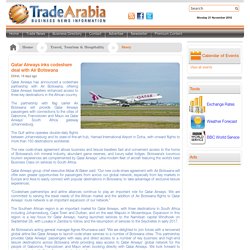 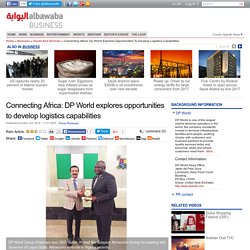 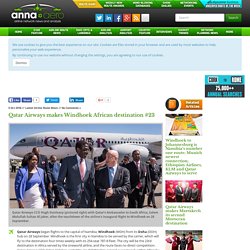 Qatar Airways began flights to the capital of Namibia, Windhoek (WDH) from its Doha (DOH) hub on 28 September. Windhoek is the first city in Namibia to be served by the carrier, which will fly to the destination four times weekly with its 254-seat 787-8 fleet. The city will be the 23rd destination in Africa served by the oneworld airline, and the route faces no direct competition. Qatar Airways CEO Akbar Al Baker, said: “We are delighted to extend our network within Africa by adding the premium leisure and business destination of Windhoek to our route map.

Africa remains one of our key target areas for growth and we have identified Namibia as an important African nation to include in our expansion plans. Liaisons maritimes Afrique-Asie : une progression de 11 % de la capacité. La liaison Asie-Afrique de l'Ouest n'est plus aussi attractive qu'auparavant. 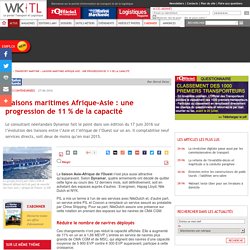 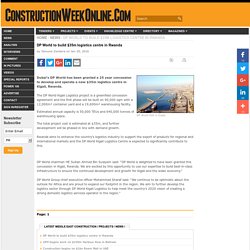 The DP World Kigali Logistics project is a greenfield concession agreement and the first phase will be built on 90,000 sqm with a 12,000m² container yard and a 19,600m² warehousing facility. Estimated annual capacity is 50,000 TEUs and 640,000 tonnes of warehousing space. The total project cost is estimated at $35m, and further development will be phased in line with demand growth. Rwanda aims to enhance the country’s logistics industry to support the export of products for regional and international markets and the DP World Kigali Logistics Centre is expected to significantly contribute to this. 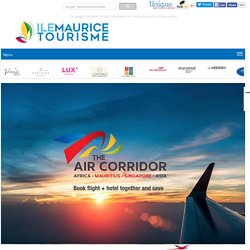 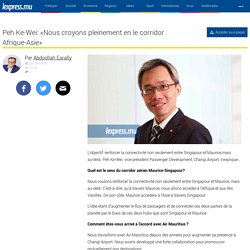 Mozambique: Qatar Airways to Introduce Direct Maputo-Doha Flights. Maputo — Qatar Airways has announced that it is increasing connections between Mozambique and Qatar by introducing, as from March, direct flights between Doha and Maputo. 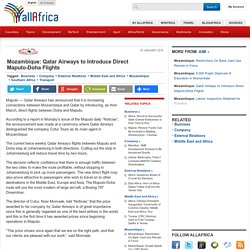 According to a report in Monday's issue of the Maputo daily “Noticias”, the announcement was made at a ceremony where Qatar Airways distinguished the company Cotur Tours as its main agent in Mozambique. The current twice weekly Qatar Airways flights between Maputo and Doha stop at Johannesburg in both directions. Cutting out the stop in Johannesburg will reduce travel time by two hours. The decision reflects confidence that there is enough traffic between the two cities to make the route profitable, without stopping in Johannesburg to pick up more passengers. The new direct flight may also prove attractive to passengers who wish to travel on to other destinations in the Middle East, Europe and Asia. “This prize shows once again that we are on the right path, and that our clients are pleased with our work”, said Momade. Asia's Lesson for Africa on Global Supply Chains. At this week’s 10th World Trade Organization (WTO) Ministerial Conference in Nairobi, Kenya, trade ministers are trying to advance 15 years of Doha Development Agenda talks to reduce trade barriers. 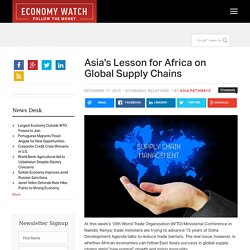 The real issue, however, is whether African economies can follow East Asia’s success in global supply chains amid “new normal” growth and rising inequality. Global supply chains refer to the geographical location of stages of production (design, production, marketing, and service activities) in a cost-effective manner. In addition, how they link by trade in intermediate inputs and final goods. For instance, the Toyota Prius—a hybrid electric mid-size hatchback car—for the US market was designed in Japan and is presently assembled there, but some parts and components are made in Southeast Asia and the People’s Republic of China (PRC).

East Asia’s shift from a poor, less developed agricultural periphery to a wealthy global factory over the last half a century is an economic miracle. Emirates plans huge plane to fight China carriers to Guangzhou—city popular with Africans for business. EMIRATES, the world’s biggest long-haul airline, plans to deploy Airbus Group SE A380 jumbo jets on routes to the southern Chinese city of Guangzhou as it tries to differentiate its offerings to fend off Chinese rivals. 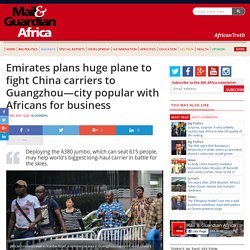 “Guangzhou is a potential destination for the two-class A380,” Badr Abbas, Emirates’s senior vice president of commercial operations in the Far East, said in an interview Tuesday in Hong Kong. The carrier is awaiting Chinese government approval to deploy the world’s largest jumbo jet, which can seat 615 people in a dual business and economy configuration, replacing the Boeing Co. 777-300 ER the airline now uses on its daily Guangzhou flight, he said. Chinese airlines such as Air China Ltd., China Eastern Airlines Corp and Hainan Airlines Co. are expanding their networks, adding direct international connections from leading cities such as Beijing, Shanghai and Guangzhou as well as secondary cities such as Chengdu.

An Emirates A380 ‘Key for us’ Syrians flying 4,820 kms to West Africa, then take road to Mali, the Sahara - and, inshallah, Europe. GAO, northern Mali: The low, mudbrick houses slowly come into focus against the desert sky as the old, beat-up pickup truck enters the Tilemsi Valley, near Gao, some 1,200 kilometres northeast of Mali’s capital, Bamako. As the vehicle comes to a halt, a dozen or so men descend to stretch their legs. Women and children remain in the hot car. Among the men is Mohamed Abdelaziz (not his real name). He left his hometown of Homs in western Syria in early 2012, when fighting intensified between government forces and the Free Syrian Army. New Air Corridor aims to boost Africa-Asia trade. From HANS KANHYE in Port Louis, Mauritius Mauritius BureauPORT LOUIS, (CAJ News) – MAURITIUS, the Indian Ocean island, is poised to live up to its potential as a gateway for business in Africa following the country’s official airline signing a major deal creating a link to Asia.

Air Mauritius has signed an agreement on an Air Corridor with the Singapore Changi Airport in a deal officials believe will bridge Asia and Africa and vice versa. It is anticipated the Air Corridor, which will resume operations in March next year, would bring greater connectivity between the various African countries and Asia, unleashing the potential African businesses that have hitherto been crippled by the absence of a regular route for their exports to Asia. It is envisaged the corridor will also provide businesspeople from both continents the opportunity to prospect new markets for their products and services. “Tariffs could become more competitive along this corridor,” said Sewpaul. – CAJ News Short URL: DP World signs Logistics Free Zone MoU with Senegal. DP World has signed an agreement with Senegal to build a logistics free zone at Blaise Diagne International Airport, in the capital, Dakar. Sultan Ahmed bin Sulayem, chairman of DP World and chairman of Ports, Customs and Free Zone Corporation (PCFC), signed the MoU with Senegalese foreign minister, Mankeur Ndiaye.