"Forecasts indicate that the demand for freight transport will grow in Sub-Sahara by about 250 per cent over the next 20 years. With different corridors set to grow at different rates, the scope in the transport and logistics industry in Africa is varied in scale and continues to thrive... 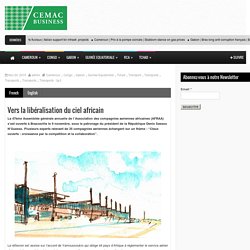 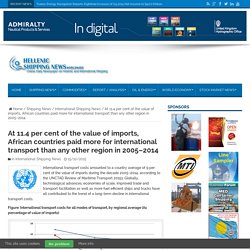 Globally, technological advances, economies of scale, improved trade and transport facilitation as well as more fuel efficient ships and trucks have all contributed to the trend of a long-term decline in international transport costs. Figure: International transport costs for all modes of transport, by regional average (As percentage of value of imports) Source: Review of Maritime Transport 2015 (UNCTAD). Among the main regional groupings, African countries paid the most (an average of 11.4 per cent), followed by Oceania (9.6 per cent), against an average of only 6.8 per cent for developed countries (see figure). 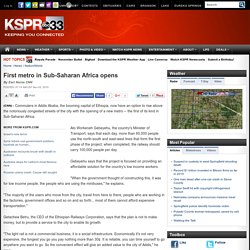 Ato Workeneh Gebeyehu, the country's Minister of Transport, says that each day, more than 60,000 people use the north-south and east-west lines that form the first phase of the project; when completed, the railway should carry 100,000 people per day. Gebeyehu says that the project is focused on providing an affordable solution for the country's low income workers. Africa's Airlines Face Powerful Incomers. By Alan Dron in London / Published October 28, 2015 Africa is tipped to be one of aviation’s hot spots over the next 10-20 years. 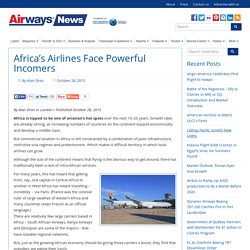 Growth rates are already strong, as increasing numbers of countries on the continent expand economically and develop a middle class. But commercial aviation in Africa is still constrained by a combination of poor infrastructure, restrictive visa regimes and protectionism. Which makes it difficult territory in which local airlines can grow. This Architect Is Building the World's First 'Droneport' in Africa. One question every drone-flyer has to ask is how they are going to land the thing. 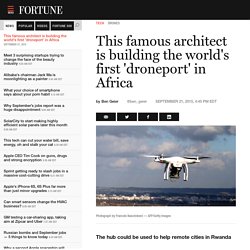 One famous architect is taking steps to change that in one city in Africa. Lord Norman Foster, a British architect who has built several famous buildings in his home country, is building a “droneport” in Rwanda, reports the UK Telegraph. The droneport would, in theory, be used to help transport supplies like medicine throughout the country. “There will be about 2.2 billion people in Africa by 2050, or 1 in 4 inhabitants of the planet will be African. How can their infrastructure even think about keeping up with this expansion?”

One example of how the drones could be used? For more on how the droneport will work, head to the Telegraph. Record African travel growth in next decade. Africa – alongside Asia Pacific – is set to be the world’s fastest growing travel and tourism market over the next 10 years according to the World Travel & Tourism Council (WTTC). 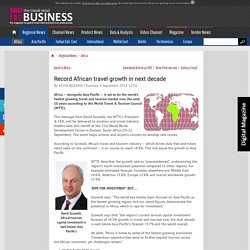 This message from David Scowsill, the WTTC’s President & CEO, will be delivered to aviation and travel industry leaders later this month at the 21st World Route Development Forum in Durban, South Africa (19-22 September). The event helps airlines and airports connect to develop new routes. According to Scowsill, Africa’s travel and tourism industry – which drives duty free and travel retail sales on the continent – is on course to reach +4.9%. This will equal the growth in Asia Pacific. AFRICA BUSINESS- Low-cost airlines confront national carriers in Africa. Why the 'annoying' motorbike taxi is king in Africa's cities, and smart firms like Jumia and Konga love them. SINCE the collapse of public bus transport in most African cities in the 1980s and 1990s, the minibus moved in to fill the vacuum. 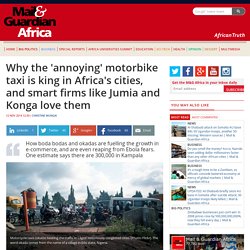 Notoriously unregulated, poorly maintained and dangerously driven, minibuses - known under various colloquial names, such as tro-tro in Accra, danfo in Lagos, gbaka in Abidjan, sotrama in Bamako, dala-dala in Dar es Salaam and matatu in Nairobi - have been the dominant means of transport. But even they haven’t been able to keep up with the demand of the African urban boom of the past ten or so years.

In 2000, one in three Africans lived in a city; by 2030, one in two will do so. The growth rate of cities like Dar es Salaam, Douala and Lagos has been 6% per year, meaning that it takes just under 12 years for their populations to double. Even relatively slower-growing cities like Accra, Kinshasa and Nairobi have been posting growth rates of 4%, at which rates it takes 17 years to double the city’s population. 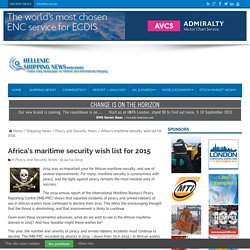 For many, maritime security is synonymous with piracy, and the fight against piracy remains the most notable area of success. The 2014 annual report of the International Maritime Bureau’s Piracy Reporting Centre (IMB-PRC) shows that reported incidents of piracy and armed robbery at sea in African waters have continued to decline from 2011. This offers the encouraging thought that the threat is diminishing, and that improvement is likely to continue.

Given even these incremental advances, what do we wish to see in the African maritime domain in 2015? Home. Africa is Becoming a Major Exporter of Dry Bulk Commodities Hellenic Shipping News reports that Africa's profile as an exporter of dry bulk commodities is rising. 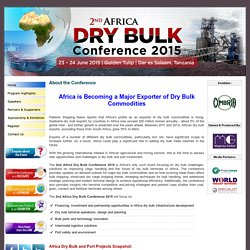 Seaborne dry bulk exports by countries in Africa now exceed 200 million tonnes annually - about 5% of the global total - and further growth is predicted over the years ahead. Between 2011 and 2013, African dry bulk exports, excluding those from South Africa, grew 55% to 66mt. Exports of a number of different dry bulk commodities, particularly iron ore, have significant scope to increase further. As a result, Africa could play a significant role in adding dry bulk trade volumes in the future. With the growing international interest in African agricultural and mining sectors, this is the time to assess new opportunities and challenges in dry bulk and port investment. 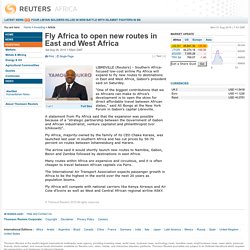 "One of the biggest contributions that we as Africans can make to Africa's development is to open the skies for direct affordable travel between African states," said Ali Bongo at the New York Forum in Gabon's capital Libreville. A statement from Fly Africa said that the expansion was possible because of a "strategic partnership between the Government of Gabon and African industrialist, venture capitalist and philanthropist Ivor Ichikowitz". Fly Africa, majority-owned by the family of its CEO Chaka Karase, was launched last year in southern Africa and has cut prices by 50-70 percent on routes between Johannesburg and Harare.

The airline said it would shortly launch new routes to Namibia, Gabon, Benin and Zambia followed by destinations in east Africa. The AU's Plans for an African Passport a Pie in the Sky? Analysis By Liesl Louw-Vaudran Amid the furore over Sudanese President Omar al-Bashir's attendance, along with celebrities like Angelina Jolie, some of the discussions at last month's African Union (AU) summit in Johannesburg went largely unnoticed.

One of these is a renewed call for African countries to open their borders and for regional economic communities (RECs) to do this by no later than 2018. Is the AU way ahead of its time? Or is this just a desperate measure to find alternatives for Africans who are so eager to leave their own countries that they risk life and limb to settle elsewhere? Low-cost African airline sets new passenger record. By Prof. Wolfgang H.Thome, Ph.D., eTN Africa Correspondent | Aug 10, 2015 Figures released earlier this morning to the London Stock Exchange, where FastjetPLC is quoted, show a sharp rise in passenger numbers once again. With 71,763 passengers flown in July, Fastjet in fact established a new passenger record in a single month, ahead by 36 percent compared to the same month last year.

According to an airline source, this was largely caused by the launch of flights to Lilongwe a few weeks ago and additional flights from Dar es Salaam to Mwanza. Health - Drones to transport lab samples and drugs in Kenya. The use of drones to transport crucial medicines or delicate samples for lab testing in remote or urban settings may soon be a common feature in Kenya and other countries. A new research study has found that drones can successfully transport delicate human samples for laboratory testing quite well from remote regions without negatively affecting their quality. This development may see enhanced use of drones in healthcare. The study by Ugandan and American researchers established that the accuracy of 33 per cent of the most common lab tests for humans were not affected even if the samples were transported by drones.

The move is aimed at ensuring that less "onerous" documentation is needed to traverse the continent within the area, and at creating a duty-free trade region. However, "large, nontariff" barriers, such as poor infrastructure and inefficient customs procedures, remain a challenge to such agreements according to research from the South African Institute of International Relations. S/Africa: Africa ready for single airline market – AU. The African Union Commission (AUC) has hailed South Africa and 11 other countries for their ambitious proposal to form a single air-transport market on the continent within two years, a senior AUC official said Saturday.Speaking on the sidelines of the 25th AU Summit taking place in Johannesburg, AUC Commissioner for Infrastructure and Energy, Elham Ibrahim, said the 12 countries that have signed up for the initiative could create up to 155,000 jobs and US$1.3 billion would be added to their Gross Domestic Product (GDP).

The AUC is now calling for more African Union member states to sign up for the project which officials said could lead to fewer restrictions on routes and cheaper fares for passengers across the continent. South Africa, Zimbabwe, Congo, Benin, Cape Verde, Ethiopia, Egypt, Rwanda, Kenya, Nigeria and Côte d’Ivoire are the countries that have agreed in principle to the project, Ibrahim said. “It will benefit our continent, our member states. Signature : APA. 10 budget airlines changing Africa's skies. Not that long ago, getting from one city to another often meant a connection in Europe. That's finally changing. Low-cost airlines are taking off across the region, serving routes that cater to the continent's growing middle class. It hasn't been easy for them. African nations signed an "open skies" agreement in 1988, similar to the one in Europe that cleared the way for successes like easyJet.