Zimbabwe: New locally owned carrier Rainbow Airlines takes to the skies. Rainbow Airlines to offer cheaper fares to more destinations. Fly Africa Zimbabwe: Time for a new African airline revolution? - The Maravi Post. Reports from Harare suggest that Fly Africa Zimbabwe has managed to get their Air Operator Certificate (AOC) back, reportedly after making a major down payment to the Zimbabwe Revenue Authority which had filed a claim of some US$2.4 million against the airline. 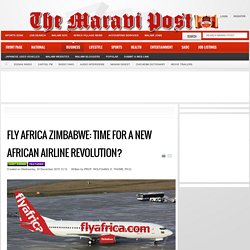 Where those funds came from could not be ascertained though a Zimbabwe-based aviation source, but suggested it could have been an investor ready to take a gamble with their money. If this will trigger another aviation revolution in accordance with the airline’s slogan, however, remains to be seen. It could not be established if the local Zimbabwean partners will not take the matter back to court as their own grievances against the Fly Africa management based outside Zimbabwe has apparently not been addressed, as a recent comment posted by them on this correspondent’s blog confirms.

Zimbabwe's Victoria Falls International Airport to put into use. Zimbabwe: Govt in Port Construction Talks. By Conrad Mwanawashe Government is engaging potential developers of a multi-billion-dollar project which will link Zimbabwe to a port north of Beira in Mozambique in a bid to significantly reduce distance and cost of moving goods between the two countries. 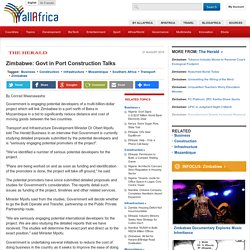 Transport and Infrastructure Development Minister Dr Obert Mpofu told The Herald Business in an interview that Government is currently studying detailed proposals submitted by the potential developers and is "seriously engaging potential promoters of the project". "We've identified a number of serious potential developers for the project. "Plans are being worked on and as soon as funding and identification of the promoters is done, the project will take off ground," he said.

The potential promoters have since submitted detailed proposals and studies for Government's consideration. Minister Mpofu said from the studies, Government will decide whether to go the Built Operate and Transfer, partnership or the Public Private Partnership route. Govt to introduce 30 new tollgates by year-end. Tinashe Makichi Business Reporter Government has applied for a $25 million loan facility from two local financial institutions to be used for the acquisition of new equipment for road maintenance this year while 30 new tollgates will be opened by the end of the year in order to boost revenue inflows. 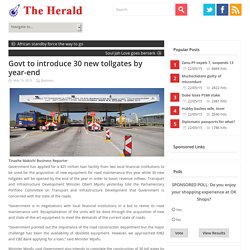 Transport and Infrastructure Development Minister Obert Mpofu yesterday told the Parliamentary Portfolio Committee on Transport and Infrastructure Development that Government is concerned with the state of the roads. “Government is in negotiations with local financial institutions in a bid to revive its road maintenance unit. Zim to set up 30 additional toll gates.

New airline seeks licence. ANOTHER prospective airline has applied for a commercial licence to fly local and regional routes as more investors express keen interest in the country’s aviation sector despite capital constraints in the economy. 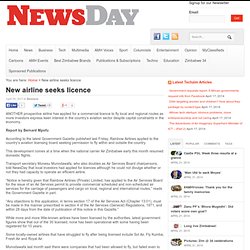 Report by Bernard Mpofu According to the latest Government Gazette published last Friday, Rainbow Airlines applied to the country’s aviation licensing board seeking permission to fly within and outside the country. This development comes at a time when the national carrier Air Zimbabwe early this month resumed domestic flights. Transport secretary Munesu Munodawafa, who also doubles as Air Services Board chairpersons, told NewsDay that local investors had applied for licences although he could not divulge whether or not they had capacity to operate an efficient airline. While more and more little-known airlines have been licensed by the authorities, latest government figures show that out of the 30 licensed, none has been operational with some having been registered for 10 years.

Air Zimbabwe prepares to fly again « Business « ZimEye. Published: March 29, 2012 Professor Matodzi|Radiovop|Zimbabwe’s ailing state-run airline, Air Zimbabwe has summoned all of its flight crew to attend refresher training courses so as to keep them in shape ahead of planned resumption of service. 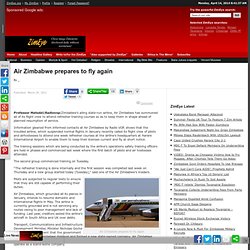 Information gleaned from informed contacts at Air Zimbabwe by Radio VOP, shows that the troubled airline, which suspended normal flights in January recently called its flight crew of pilots and airhostesses to attend one week refresher courses at the airline’s headquarters at Harare International Airport to enable them to keep their licenses current and fly at short notice.

The training sessions which are being conducted by the airline’s operations safety training officers are held in phases and commenced last week where the first batch of pilots and air hostesses attended. The second group commenced training on Tuesday.