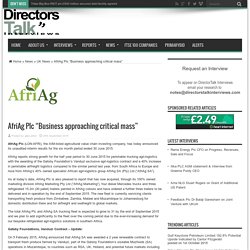 AfriAg reports strong growth for the half year period to 30 June 2015 for perishable trucking agri-logistics with the awarding of the Gatsby Foundation’s Vanduzi exclusive agri-logistics contract and a 40% increase in perishable airfreight logistics compared to the similar period last year, from South Africa to Europe and Asia from AfriAg’s 40% owned specialist African agri-logistics group AfriAg SA (Pty) Ltd (“AfriAg SA”). As at today’s date, AfriAg Plc is also pleased to report that has now acquired, through its 100% owned marketing division AfriAg Marketing Pty Ltd (“AfriAg Marketing”), four diesel Mercedes trucks and three refrigerated 15.2m (30 pallet) trailers painted in AfriAg colours and have ordered a further three trailers to be delivered and in operation by the end of September 2015. 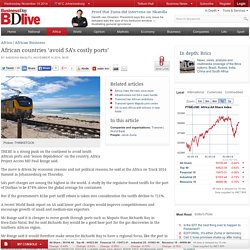 The move is driven by economic reasons and not political reasons, he said at the Africa on Track 2014 Summit in Johannesburg on Thursday. SA’s port charges are among the highest in the world. A study by the regulator found tariffs for the port of Durban to be 874% above the global average for containers. But if the government’s R1bn port tariff rebate is taken into consideration the tariffs decline to 721%. Trina opens warehouse in South Africa. Trina's Ben Hill said he expected double digit growth in Africa during the next ten years. 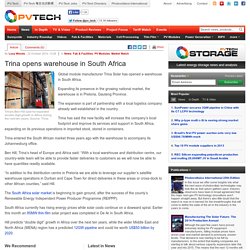 Source: Trina. Global module manufacturer Trina Solar has opened a warehouse in South Africa. Expanding its presence in the growing national market, the warehouse is in Pretoria, Gauteng Province. The expansion is part of partnership with a local logistics company already well established in the country. Rolling stock firm to expand in Africa. THELO Rolling Stock Leasing, a South African rail financier, is seeking a partner to buy a 30% equity stake and help win new contracts around sub-Saharan Africa. 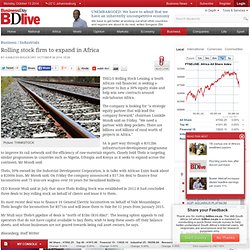 The company is looking for "a strategic equity partner that will lead the company forward," chairman Lumkile Mondi said on Friday. "We need a partner with deep pockets. There are billions and billions of rand worth of projects in Africa. " SA is part way through a R312bn infrastructure-development programme to improve its rail network and the efficiency of raw-materials exports. 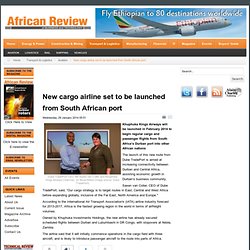 Saxen van Coller, CEO of Dube TradePort, said, “Our cargo strategy is to target routes in East, Central and West Africa before expanding globally, inclusive of the Far East, North America and Europe. " SAMSA Paper.pdf. Nyati as a Cross Border Transport Operation. Saflow.psd - saflow.pdf. Fastjet joins Zuma's son to offer cheap SA flights. Under a memorandum of understanding signed with Blockbuster, Fastjet could start operating on the Johannesburg to Cape Town route by the end of May, it said in a statement. 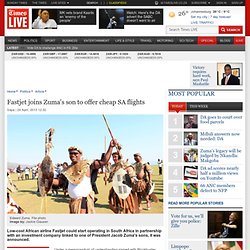 Blockbuster, which would own a 75 percent stake in the entity, is associated with Zuma's son Edward Zuma and local businessman Yusuf Kajee. Air fares in South Africa had "skyrocketed" since 1Time was liquidated in November, said Fastjet chairman David Lenigas. "We do not seek to be a hostile competitor in the market place, as we fully understand and appreciate the significance of the national carrier and existing airlines in country," he said. "Fastjet seeks to meet... demand, and we look forward to bringing the people of Africa the continent's first low-cost, point-to-point, all jet airline, operating to international standards of safety and quality. " Fastjet had been in talks with a number of local entities to support its market entry strategy. 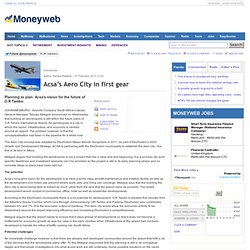 An aerotropolis is a city in which the layout, infrastructure, and economy is centred around an airport. The problem however, is that the conceptualisation has been in the pipeline for a while now. The Aero City concept was adopted by Ekurhuleni Mayor Mondli Gungubele in 2011, as part of Ekurhuleni’s 2025 Growth and Development Strategy. Introduction of the 'Aerotropolis Concept' Transnet Freight Rail in talks to create unified regional rail system. TRANSNET Freight Rail has started negotiations with four railway organisations in countries north of South Africa to create a unified railway system on the corridor linking South Africa and the Democratic Republic of Congo, Transport Minister Ben Martins said on Wednesday. 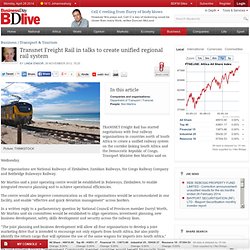 The organisations are National Railways of Zimbabwe, Zambian Railways, the Congo Railway Company and Beitbridge Bulawayo Railway. Mr Martins said a joint operating centre would be established in Bulawayo, Zimbabwe, to enable integrated resource planning and to achieve operational efficiencies. The centre would also improve communication as all the organisations would be accommodated in one facility, and enable "effective and quick deviation management" across borders. Transnet in talks on African copper transport link. TRANSNET Freight Rail hopes to finalise an agreement next month on rail co-operation between South Africa, Zambia, Zimbabwe and the Democratic Republic of Congo, allowing the copper-rich countries to increase exports through Durban. 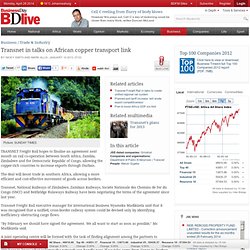 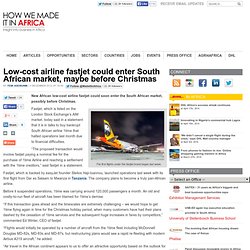 The first flights under the fastjet brand began last week. Transshipment hub to reduce poverty. If African countries are to reach the levels of economic growth needed to reduce poverty in a sustainable manner, increased levels of public and private investment must take place in strategic productive sectors, states technical specialist firm Arup. It adds that this is especially true for the transportation infrastructure sector that underpins transshipment hubs.

Musina, in Limpopo, has been identified as one of the most appropriate areas in Southern Africa for the development of a transshipment hub, based on its geographic location and other related factors. Arup infrastructure associate Dinesh Chaithoo notes that the establishment of a transshipment hub in Musina will lead to many economic advantages for the Limpopo province. “This hub will serve as a catalyst for rapid economic development and will make the province the central location for freight movement between South Africa and the rest of the Southern African Development Community (SADC) countries. 20120409 MDS launch presentation.pdf (application/pdf Object)