Rwanda plans strategic import-export base in Djibouti. Rwanda's airline to start flights to London from May 26. KIGALI, March 29 (Reuters) - Rwanda's airline will start three weekly flights to London's Gatwick airport on May 26 and it expects to exceed one million passengers on all its routes in the next three to four years, Chief Executive John Mirenge said on Monday. 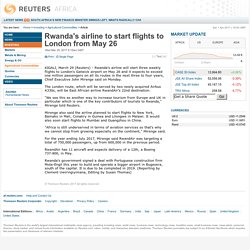 The London route, which will be served by two newly acquired Airbus A330s, will be East African airline RwandAir’s 22nd destination. "We see this as another way to increase tourism from Europe and UK in particular which is one of the key contributors of tourists to Rwanda," Mirenge told Reuters. Rwanda’s $38M Cable Car Project Hooks Italian Investor.

Cable car would make access to mount Karisimbi summit easy Rwanda has found an investor ready to implement the ambitious cable car project which was budgeted for an enormous $ 38 million three years ago. 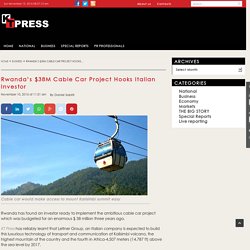 KT Press has reliably learnt that Leitner Group, an Italian company is expected to build this luxurious technology of transport and communication at Kalisimbi volcano, the highest mountain of the country and the fourth in Africa-4,507 meters (14,787 ft) above the sea level by 2017. Rwanda: Egyptian Aviation Academy Expresses Interest in Rwanda. By Leonard Tuyisenge The Egyptian Aviation Academy (EAA) has expressed interest in opening a branch in Rwanda in order to assist the region whenever necessary. 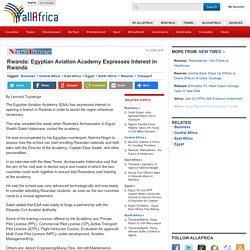 This was revealed this week when Rwanda's Ambassador to Egypt, Sheikh Saleh Habimana, visited the academy. He was accompanied by his Egyptian counterpart, Namira Negm to assess how the school can start enrolling Rwandan nationals and held talks with the Director of the Academy, Captain Elias Sadek, and other personalities. 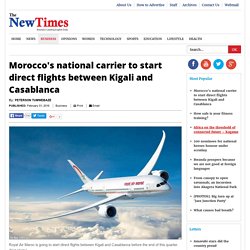 He said Rwandan and Moroccan aviation authorities are working together to finalise the necessary paperwork so that the airline starts flights as planned. The entry of Royal Air Maroc Express will bring the number of commercial airlines that serve Kigali International Airport to 12, including RwandAir, Kenya Airlines, Qatar, Fly Dubai, Turkish Airlines, Ethiopia Airlines and KLM, among others. Start-up snapshot: Uber for motorcycle taxis in Rwanda. SafeMotos is a Rwanda-based start-up that connects customers with motorcycle taxis. 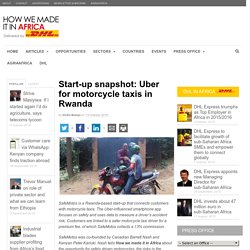 The Uber-influenced smartphone app focuses on safety and uses data to measure a driver’s accident risk. Customers are linked to a safer motorcycle taxi driver for a premium fee, of which SafeMotos collects a 13% commission. SafeMotos was co-founded by Canadian Barrett Nash and Kenyan Peter Kariuki. Nash tells How we made it in Africa about the opportunity for safely driven motorcycles, the risks in the market and why his business doesn’t need US$1m right now. Below are edited excerpts. 1. SafeMotos is an Uber-styled motorcycle hailing app, but with a focus on safety. We then connect our customers to drivers who are the safest, based on their driving habits. The idea of SafeMotos first came into my mind when my mother came to Rwanda to visit me in April last year.

Customers using SafeMotos benefit by being connected to a driver who has been pre-tested. 2. 3. Right now money isn’t our bottleneck. 4. 5. Kigali city opens new bus terminal. KIGALI CITY NEW PUBLIC TRANSPORT SYSTEM. The most from the coast. KIGALI (Xinhua) -- Rwandan traders are excited about the plans by the government to construct an inland clearing port in Masaka, Kicukiro district, in the city suburb of capital, Kigali. 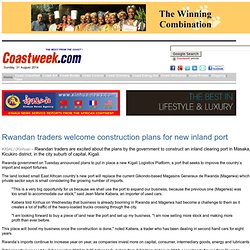 "This is a very big opportunity for us because we shall use the port to expand our business, because the previous one (Magerwa) was too small to accommodate our stock," said Jean Marie Kabera, an importer of used cars. Kabera told Xinhua on Wednesday that business is already booming in Rwanda and Magerwa had become a challenge to them as it creates a lot of traffic of the heavy-loaded trucks crossing through the city. The Switzerland of Africa. From landlocked to land-linked – Rwanda is striving to become the regional trade hub by capitalising on its location between East, West and Central Africa to serve its neighbours. 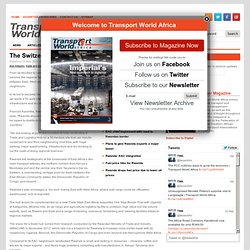 In its bid to become the ‘Switzerland of Africa,’ the country has set aside a 50-acre site for parking, warehousing, infrastructure and dry docking. Francois Kanimba, Rwandan Minister of Trade and Industry says, “Rwanda should be the centre where industries could be based to distribute their goods in all our neighbouring countries.” “We are looking at potential investors to help us develop a Trade and Logistics Hub on a 50-hectare site that can handle containers to and from neighbouring countries, with huge parking, major warehousing, infrastructure and dry docking to cut the costs of doing regional business.” Rwanda’s plan envisages a “dry port” linking East with West Africa, where bulk cargo could be offloaded, warehoused, and re-exported. 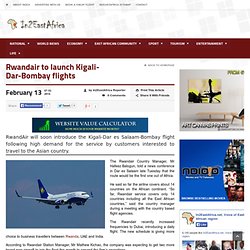 The Rwandair Country Manager, Mr Hafeez Balogun, told a news conference in Dar es Salaam late Tuesday that the route would be the first one out of Africa. He said so far the airline covers about 14 countries on the African continent. “So far, Rwandair service covers only 14 countries including all the East African countries,” said the country manager during a meeting with the country based flight agencies.